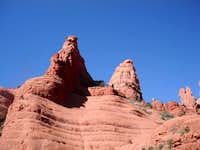 The Church Spires area is named after the “Chapel of the Holly Cross”, a popular tourist landmark in Sedona. Chapel of the Holly Cross is a church that is built into a significant rock formation with a huge cross as its anchor. Up and to the east on a ridge are a variety of red towers. These make up the “Four Flying Horsemen of the Apocalypse". From left to right they are named the North Tower, Minister and Pulpit, Christianity and the Streaker. To the left of these towers is Trundlers Club Buttress which is more of a wall than a buttress. Other towers in the same vicinity include Blow Job Rock, Devil’s Thumb and the Watchtower. 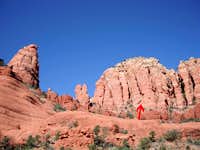 The climbing at Church Spires is fairly stout on typical desert tower sandstone with most routes falling in the 5.11 range. Trundlers Club Buttress the route (5.10d) is one of the more popular moderates and was established in 2001. Mission to Mars (on the wall behind the church aka Planetarium) is a bolted route that gets one on line review of “best 5.12d in Arizona”. Pussy Mind Trick, to the right of Trundlers Club, is a stellar 5.11d with gear and fixed pro.

Locate the local tourist attraction in Sedona known as the Chapel of the Holly Cross, a church built into a local rock formation at the end of Chapel Road right off highway 179 in Sedona. Park at a small pullout on the north side of Chapel road before the entrance to the private church road. Hike up the road to the chapel. For the towers to the east and Trundlers Club Buttress, catch a public hiking trail on the right side before reaching the final bend into the church. Follow this trail as it dead ends into another trail. Turn left and follow this main trail as it heads toward the ridge containing the towers to the east. 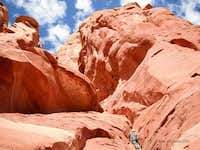 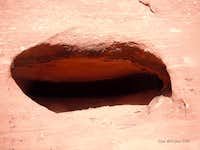 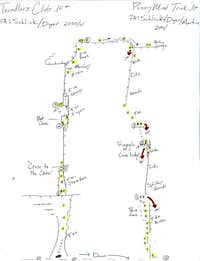 , Two well protected routes, fixed and trad, side by side