Cima della Vezzana 3192 m is the highest mountain of the Pale di San Martino Group in the Western Dolomites. It is located near the Passo Rolle, in the North-West sector of the group, next to the most striking Cimon della Pala. It is bordered to the south by the Passo Travignolo 2925 m and to the north by the Passo Val Strut 2870 m. To the West of the mountain there is a wide gully, partly occupied by the Travignolo glacier, which reaches the upper Val Venegia along which it takes place the described route.

From Trento or Bolzano take the motorway Autobrennero A22, exit “Egna, Ora/Neumarkt, Auer” and continue along the road SS48. Once in Predazzo turn to right onto road SS50 and follow “Passo Rolle” signposts. Stop at the parking place some hundred meters after the pass, where it starts the path to Baita Segantini. From Passo Rolle reach the Baita Segantini 2170 m along a narrow road (and shortcuts along paths). From here, traverse clearly to the right (the trail tracks are obvious in the absence of snow) towards Cimon della Pala. Don't loose too much altitude and cross the basal screes or snowfields to the low exit of the Travignolo Glacier, a wide depression between the Cimon della Pala and the Cima della Vezzana, which on this side falls with high walls.

Cima Vezzana was conquered in June 1878 by the English Douglas William Freshfield and Charles Comyns Tucker, who reached the summit from the Travignolo glacier.

In late spring with good quality snow this route offers a profitable climb with ice-axe and crampons, in the majestic and beautiful Dolomite environment. In early Spring it is also a popular ski mountaineering itinerary.

From Passo Rolle reach the Baita Segantini 2170 m  on an easy road (shortcuts on paths). From here, traverse sharply to the right (on evident traces of trail, in the absence of snow), without losing too much altitude, towards the Cimon della Pala; cross the basal snowfields up to the wide basin between the Cimon della Pala and the Cima della Vezzana, which on this side falls with high walls.

Climb up the wide snow slopes for about 500 m of difference in level. Pay attention that at the top, in late season, it's possible to find some crevasses open. At about 2700 m the gully becomes steeper. Take the obvious gully on the left, leading to the Passo del Travignolo (200 m at 45°, stretches to 50°). With scarse snow halfway it can emerge a large boulder; it must be passed on the right with a short, steeper passage. Several equipped belay are located on the right facing in.
From the wide Passo del Travignolo at 2925 m of altitude turn to left on easy slopes and then follow on snow or easy rocks the ridge leading to the summit of Cima della Vezzana (summer path, trail n. 716, the summit appears only at the last moment).

The route can also be a fine ski-mountaineering goal with a highlight: the exciting ascent over the former Travignolo glacier among the vertical walls of Cima Vezzana left and Cimon della Pala right, up to the Passo Travignolo. The difficulty of this trip depends very much on the snow conditions, it's always considered difficult, because of the steepness of the final part below the saddle (up to 50°) and the 3 meters high rock nose, close by the pass, which can be insidious due to snow and ice. Follow the path which leads through the long but marvellous Val Venegia 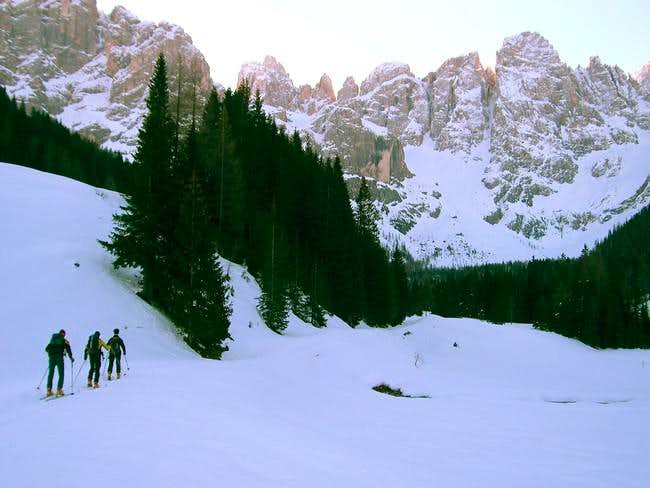 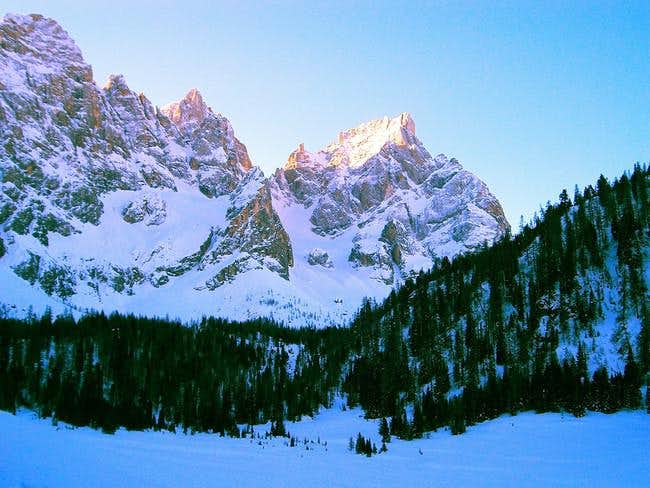 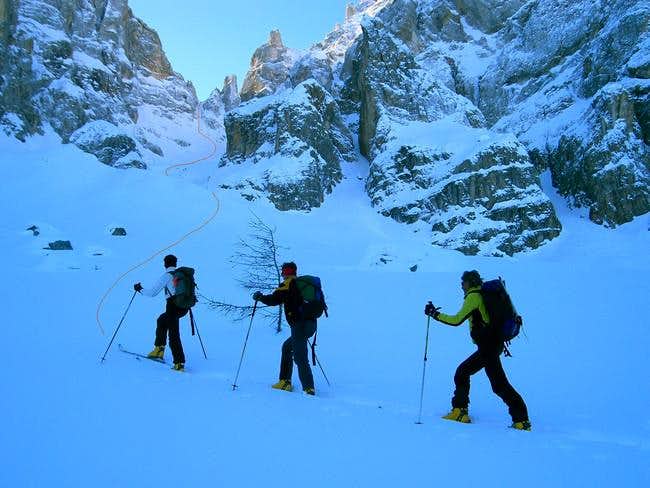 The ascent over the Travignolo glacier begins

Head towards the saddle and begin the ascent in itself, which now becomes very steep 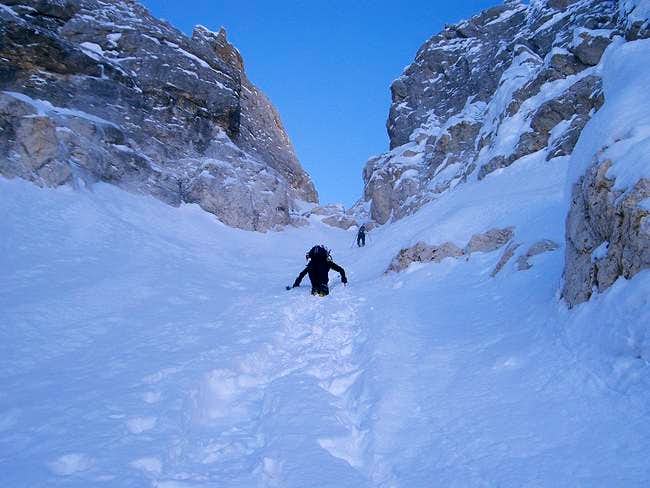 The steepest part of the trip below the rock nose 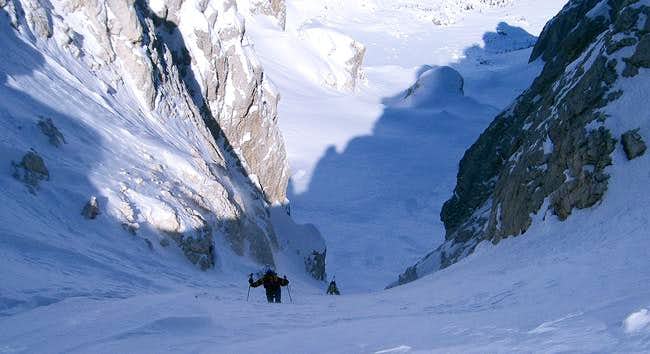 Arrived at the saddle turn left and continue along the Vezzana Est slopes, gaining easily the summit. The descent is done along the ascent itinerary