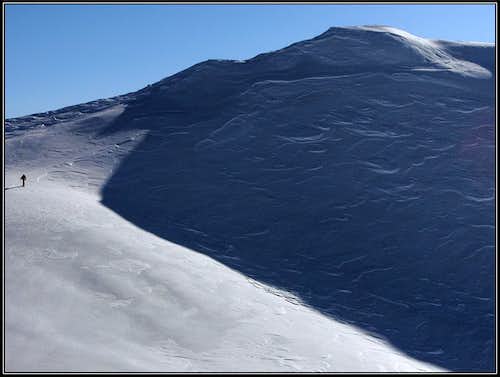 Cima Val di Puartis, 1927 m, is a nice ski summit east of Findenigkofel / Monte Lodin, in Carnic Alps main range. More about the broader situation see on the parent page of Findenigkofel / Monte Lodin. As the summit is rising above an ideal terrain for tour skiing, Cima Val di Puartis is a valuable goal in winter and spring. The neighbouring Findenigkofel / Monte Lodin can also be ascended in winter and skied down, but the ascent is som 30 minutes longer and harder, actually enjoyably possible only when there is a lot of snow. As it is seen from the pictures, the winter 2008/09 was very rich with snow, so the surrounding summits were a true ski paradise. But the lower part - the road - is boring and you need some 2 hours to reach the broad upper ski slopes. Here the northern (Austrian) route will be described, skiing from the summit is also possible towards the south, on the Italian side. 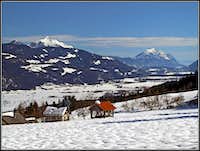 From the valley of Gail/Zilja we must reach by a mountain road Straniger Alm, 1479 m. From Goderschach, 623 m, a hamlet of Unterbuchach, 900 m, can usually be reached by a cleaned road. People live in Unterbuchach, but they use 4x4, chains on tires etc., so come prepared. On February 28th, 2009 the road was very icy and with only winter tires we came only some 800 m high. From Unterbuchach we follow the mountain road (not cleaned until summer) towards the south. There are some crossroads, the remoteness of the area might pose some problems, because tour skiers don't ascend there just every day. A good map is needed to find reliably the right road. After an hour of the ascent (in turns upwards) the road starts going horizontally around Feldkofel and Leitenkogel. There through a few ravines avalanches may come down. On the altitude of 1400 m we reach nice meadows and go over them directly on Straniger Alm, where a big house stands. We needed from 800 m up there almost 2 h 30 min of a comfortable walk. 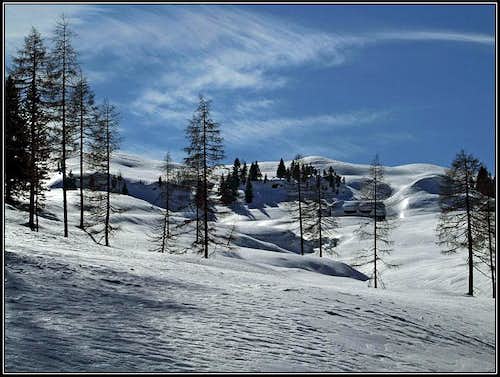 This broad alpine meadow lies at the end of the valley of Stranig Bach. South of it, on Passo di Melédis, cca 1550 m, there is a passage over the main Carnic crest on the Italian side. In Winter above Straniger Alm there are many ski tour goals: Leitenkogel, 1845 m, Waidegger Hoehe, 1962 m, Cima Val di Puartis, 1927 m, and Findenigkofel / Monte Lodin, 2015 m, itself. West of Passo di Melédis you can ski down from the summits of Stranigerkopf, 1839 m, and Schulter / Creta di Lanza, 2057 m.

From Straniger Alm towards the west a mountain road goes over the high saddle below Waidegger Hoehe, ending on Waidegger Alm. But in winter this road is not of a much use, because broad and not steep slopes are everywhere. The hut on Straniger Alm is closed in times of tour skiing (if conditions are good, seek information about the hut in the valley). 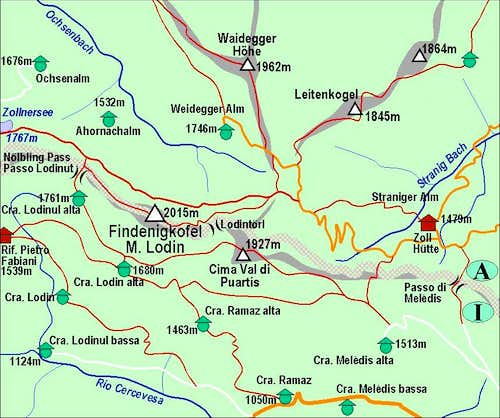 From Straniger Alm, 1479 m, you go either by the road towards the south on Passo di Melédis, or towards the SW over the gentle, opened slopes. In any case it's good to hit the main ridge above, which is here hardly distinguishable. The direction is first towards the SW, then towards the W. South of the main ridge you see the ravine of Rio Malinfier, the one where you don't want to descend. Just move above it up towards the west or even more to the right, where the slopes are very broad. In front, you will see the Point 1890 m (and left of it, across the ravine Cima Val di Puartis), keep right of it, and when passing this point, ascend the higher dome of the Point 1904 m. There everything opens up. Towards the north you see the broad saddle towards Waidegger Hoehe and Leitenkogel, you are already some 100 meters higher of the saddle. Towards the south you see the slopes of Cima Val di Puartis, your goal. And towards the west you see the bold summit of Findenigkofel / Monte Lodin. If the latter is your goal, you can clearly see the possible passage from the right on its east ridge.

If you continue on Cima Val di Puartis, you descend first some 20 meters and then do the northern slope of the hill towards its east ridge. Depending on snow conditions you might leave skis some 10 meters below the summit or ascend the summit carrying your skis with you. It is possible to ski down from the very summit. Take care of corniches in a snow rich winter!

You ski down over the northern slope of Cima Val di Puartis and then best towards the right, crossing the southern slope of Point 1890. On the other side it's all easy and fun. You can ski down to Straniger Alm wherever you want. And then continue by its meadows and finally the mountain road to the car.

Difficulty: On the SAC scale the grade is F+. The whole route is easy, but quite long. From Unterbuchach you will need some 2 h 30 min to Straniger Alm and another 1 h 30 min to Cima Val di Puartis. Altogether you have some more than 1000 meters of altitude to overcome. Just below the summit some care is needed (possible corniche, steep slopes). Also in bad visibility the broad slopes above Straniger Alm can require good orientation skills.