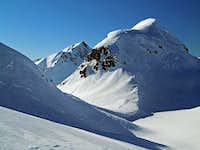 From the nearby Cima Val di Puartis 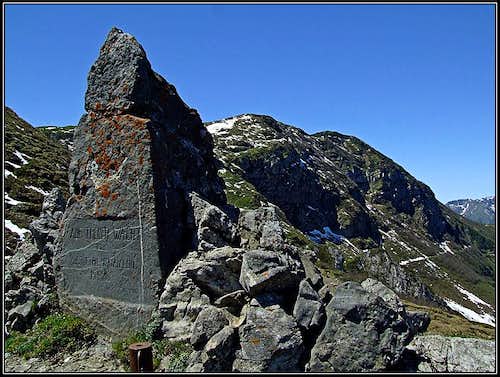 On the way to Findenigkofel / Monte Lodin

Findenigkofel / Monte Lodin is a ridge mountain, which is a nice hiking goal because it stands a bit more out of the main Carnic crest than the neighbouring mountains. Otherwise there is nothing so special in it - a very steep, grassy southern slope, a short, partly rocky northern slope and the two ridges meeting on the culmination point. Still, the neighbourhood is beautiful. Nice high alpine meadows, attractive especially in autumn and spring, slopes, appropriate for tour skiing, broad panorama ...

So, Findenigkofel / Monte Lodin is first of all a hiking mountain. Along the whole Carnic Main Crest goes the famous Karnischer Hoehenweg / Traversata Carnica - a multi-day, long-distance hike. Next, in good conditions Findenigkofel / Monte Lodin can also be done as a ski tour. If conditions are not so good, you can ski down virtually from any of the neighbouring bumps or mountains, such as Waidegger Hoehe or Leitenkogel. The area around Findenigkofel / Monte Lodin is also very appropriate for mountain biking. Many mountain roads and good path, originating from ex military roads can bring you quite high, the total elevation gain from the valley of Gail / Zilja could exceed 1200 meters. And the last, but not least matter of interest - the area is well known by producing good cheese - the Gailtaler Almkaese ('Gail valley alpine cheese). For those, interested in history - along the main ridge many remains from the World War I are still seen. Already two days after the Italian declaration of war, the mountain was occupied by Italian troops and only after several unsuccessful attacks the Austrians could recapture it in mid-September 1915. By the end of the war, the mountain then remained under Austrian control (Wikipedia).

In the main Carnic crest, the first saddle NW of Findenigkofel / Monte Lodin is Passo Lodinut / Noelbling Pass, 1817 m. More towards the W there's Passo Pecol di Chiaula / Zoellnertoerl, 1797 m, which can be considered the border between Findenigkofel / Monte Lodin and Hoher Trieb / Cuestalta. Towards the E of the main summit, there's first Lodintoerl, ca. 1865 m, after which a gentle crest is waving in quite some distance towards the broad Passo di Meledis / Straniger Sattel, 1613 m.

Close to the highest summit there are some more peaks to mention. South-east of the main summit there are in the main crest a few more rocky bumps, one of them has a name Cima Val di Puartis / Puartis, 1927 m. It's already all on the Italian territory. Towards the north in the vicinity of Findenigkofel / Monte Lodin a strong side ridge deters from the main Carnic Alps crest. It branches soon in three ridges. The nothwestern branch culminates on Waidegger Horn, 1962 m, after which two branches go down dowards Gail/Zilja valley. In the western branch, the last higher elevation is Noelblinger Hoehe, 1760 m. The northeastern main branch reaches first a highpoint on Leitenkogel, 1845 m, the next bump in the ridge, Feldkofel, is even a bit higher, 1864 m, then the ridge descends further down. All these summits are nice, easy hiking goals and ski tour goals.

Around Findenigkofel only Paleozoic rocks can be found. The summit ridge is mostly built of older Carboniferous slate and sandstone / greywacke. But on the NE (Austrian) slopes already many different limestones can be found, mostly of dark, grey and reddish color. They are older, from all ages of Devonian and even from Silurian, so 420-440 million years old. That is why the north face of Findenigkofel has been included as one of the geo-points of Carnic Alps Geoparc. The broad area east of the summit, towards Straniger Alm is again built of younger, Upper Carboniferous slate and sandstones.

Gail/Zilja valley on the north can be reached from Villach (highway), driving towards the west.

Paularo can be reached from Tolmezzo (highway), driving towards the north and then deterring north-east in Val Incarojo.

The summit of Findenigkofel / Monte Lodin can be reached by three marked approaches.

4. Waidegger Hoehe from the south. This grassy summit can be easily ascended by the trail No. 44 from the broad saddle south of it (1810 m). 30 minutes from the saddle (left across the slopes runs also a variant, suitable for mountain bikers). From the summit, marked trail continues far towards the NW, almost to the summit of Noelblinger Hoehe. Just before it, on Ochsenbachsalm, it turns right down, where the cart-road descends in many turns into the Gail / Zilja valley. That's of course in reverse direction also the possibility on a long ascent to the upper area. 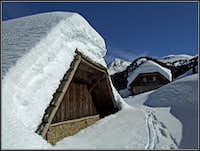 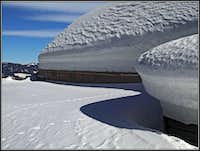 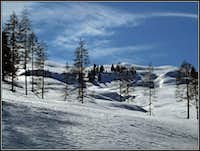 Findenigkofel / Monte Lodin can be ascended any time of the year. Very beautiful is autumn, but also spring and seasons when conditions for ski touring are good.