Cima Valdritta From the North

The view on Garda lake 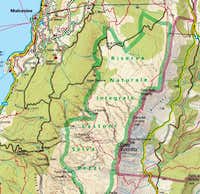 This is a very popular, but not the easiest and shortest ascent on Cima Valdritta. By using the Malcesine cable car, the ascent can be done in half a day. But this route can be wonderfully combined with other routes. As described on the parent page, Cima Valdritta can offer you one of the greatest hiking experiences in the Southern Alps. Very broad panorama, breathtaking views 2150 m down on the big Garda lake, abundant flora and picturesque rocky scenery - what else could a hiker wish!

The northern approach on Cima Valdritta crosses first the popular and already very panoramic Cima delle Pozzette, 2132 m, then in many ups and downs continues on the main summit. Other summits in between could also be ascended (scrambled up), but there are no paths on them. 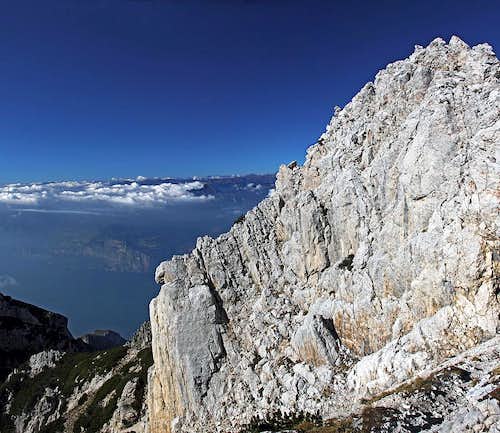 The summit rocks of Cima Valdritta
Difficulty: It's a hiking tour, with only one short place protected by a steel cable. On the Swiss Hiking Scale its difficulty is graded T3. The path originates from the World War I. The section from Cima delle Pozzette on is on a few places deteriorated, one would say that in the past it was better maintained. There some additional care is needed.

Orientation: The route is well marked. It goes by the main ridge, where it is hardly passable, the path detours summits on the eastern side. Orientation is easy. See also the GPX track in the header!

Exposition: Some places are a bit exposed, but there are no really vertigous passages. Still, on same places a safe step is needed, as there you could not afford a mistake. The rocky summit part is ascended by a broad and well carved mule track (from the war), which gets a bit lost only just below the summit.

Objective dangers: In good conditions there are really not any. In a stormy weather take care of lightning on the ridges.

Best season: Summer months, normally from second half of June till October (or first snow).

Tour start: The upper station of Malcesine cable car, 1760 m. See the parent page how to get there!

Altitude to overcome: There are many ups and downs. From Cima delle Pozzette you descend some 150 m, then again some 50 m on the saddle below Cima Val Finestro, and much more shorter descents. So, one way you must overcome in ascent some 700 m of altitude, on return additional 200 meters.

Time for ascent: 3 h. Have in mind that returning back to the cable car station you still have 200 m of ascent, so count for the return with some 2 h 30 min.

The N ridge of Cima delle Pozzette
From the cable car station, 1760 m, we first descend on the nearby saddle, called Bocca Tratto Spino, 1720 m. From there we continue by the main ridge - the park path is marked by wooden pillars. We pass the upper station of a chair lift and continue by the more and more panoramic main ridge. On the last grassy bump there are hundreds of ciarns and after that the path becomes more rugged. It goes by the rocky ridge, covered with dense dwarf pines and finally we reach the panoramic head of Cima delle Pozzette, 2132 m.


The next summit ahead of us is Cima del Longino, 2179 m. But the path first goes some 150 m down and only then starts detouring it.

Cima del Longino
After we pass it with some more ups and downs, we found ourselves on its eastern side, from where we see the next summit ahead of us. That's Cima Val Finestra, 2086, and the saddle before it is some 50 m below us. 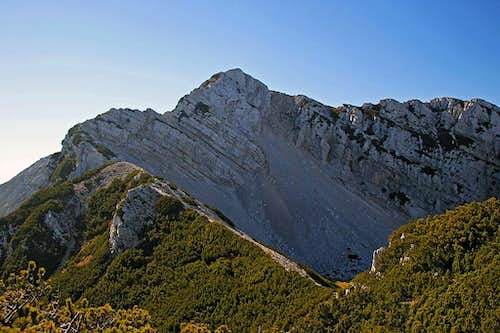 Cima Val Finestra
We descend there and start gaining altitude again by a nice, flat main ridge. Just before its end there is a passage over a slab, which is protected by a cable. In summmer it's almost useless, but if icy, that part of the ridge crossing may become tricky. When above, the path ascends around the rocky eastern slope and then crosses further towards Forcella Valdritta. The summit is not well seen, only if you are really attentive, you spot the cross on it. We detour two more edges, the path around them is narrow and deteriorated. Before reaching Forcella Valdritta, we can observe bizarre rock towers, rising from the slope on the left.

The picturesque eastern slopes of Cima Valdritta
Before the notch, already on the southern side, we deter from the main trail right up. A comfortable and well carved mule track winds up and in less than 15 minutes we are on the summit ridge. There we best choose the climb directly by the narrow rocky ridge. Actually it looks that from the World War I even some remains of steps can be seen.

The place, where the cross stands, is not the highest one. Some 50 meters towards the north we actually see the highest elevation and it is also worth going there.

You descend either by the same route, or choose any of longer combinations. See the parent pager for some ideas.