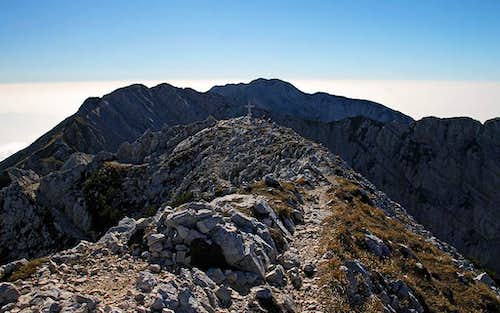 Cima Valdritta is the highest summit in the big Monte Baldo range. The ridge crossing of the highest part of this range is one of the most rewarding hiking tours in Southern Alps. Very broad panorama, breathtaking views 2150 m down on the big Garda lake, abundant flora and picturesque rocky scenery - what else could a hiker wish! Characteristics of the broader area of Monte Baldo should be described on the parent page, here I shall focus only on the highest summit and its routes. As the neighbouring summits, also Cima Valdritta is rocky and precipituous on the upper 200 meters. In that part of the ridge also the eastern slopes are quite steep and rocky. Interesting, picturesque towers are rising on that slope, then some 700-800 m lower a nice, grassy terrace with alpine pastures stretches. The western side is wilder and lowers steepy just down till Garda lake. It is intermitted with strong walls, between them are sections of overgrown slopes. Towards the NW in that part of Monte Baldo range many parallel, karstic high valleys are descending: Val Finestra, Val Dritta, Val Larga etc. As said, Cima Valdritta is primarilly a hiking goal. Climbers are using more the crags in the lower parts of Monte Baldo, and those, which roads are reaching. For skiing more the northern part of massif, close to Malcesine cable car is appropriate. Regarding geology, as most of Monte Baldo massif, also Cima Valdritta is made of Jurassic and Paleogene limestone and on the western side of marly limestones and marls.

The great panorama of Cima Valdritta

The views from Cima Valdritta and also from the whole main ridge of Monte Baldo are fantastic. In a clear weather the most stunning is the view deep down on Garda lake and its mountaneous surroundings. On the north, the glaciers of Adamello-Presanella group are shining, just left of that group is the rocky Brenta massif. Viewing more towards the NW and W, one can see uncountable many peaks of Alps - on the horizon even of the high groups as for example Bernina and Monte Rosa. If the Po river plain is not misty, beyond it the high summits of nearby Apennines can be seen. And on the east there are the groups of Southern Alps from Monte Lessini and Carega-Pasubio group, till the already quite distant Dolomites. Click here to run a beautiful panorama (by Patrick Runggaldier). For curious and analytical souls click this link to see the 360 degrees panorama on the great Ulrich Deuschle application.

As there are many route combinations, there are also many possible trailheads for ascents on Cima Valdritta. It all depends on logistics and transportation means you want to use - car, bike, cable car.

There are many great combinations. At the end of this chapter I will present a few ideas for such big tours, but routes, which you then combine, will be described separately. Unfortunately we did only sections of those big tours, but even those exceeded all expectations.

On the northern ridge

A very popular, but not the easiest and shortest approach - here a detailed description. From the upper station of Malcesine cable car, 1760 m, you hike along the main ridge southwards. Many ups and downs, very panoramic, difficulty T3. 3 hours.

It's hard to imagine that someone would also go up by this route on Cima Valdritta - as there is the cable car. But descending from the very summit to the middle station of cable car is nice and panoramic. From the top you first descend towards the S on Forcella Valdritta, and there turn right, descending towards the west. You follow the marked path No. 5. It first descends steeply into the upper Val Dritta valley, then goes by the valley down in the NW direction. From some 1800 m the path does a short ascent on the promontory of La Guardiona, 1850 m, and from there continues down across the slopes in the northern direction. So we reach another panoramic point La Guardia, 1520 m, and continue from it in mainly the same direction. On some 1200 we reach the panoramic trail above Malcesine. Going northwards we pass Col di Piombi and on the other side descend more steeply towards the cable car station, 550 m. This whole descent should not be underestimated. It is very long by distance and high by altitude difference (1700 m), technically there are passages of T3, otherwise mostly easier. Some 4 hours for descent.

On the SE slopes of Cima Valdritta

3. From the East Road

You start the tour on some 1570 m. The marked path No. 652 ascends across the slopes towards the SW. Already on some 1700 m you deter from it right and go by another marked path which in several turns ascends the steep slopes directly up - the direction is towards the NW. You soon leave the tree line, the slopes are covered with dwarf pines and grass. So you reach the main ridge and hit there the main marked path No. 651, which follows it. You turn right (northwards) and follow the No. 651 till below the S summit ridge of Cima Valdritta. While the path 651 continues across the eastern slopes around the summit, you take a well built mule track (also from the World War I) which goes directly up on the summit. Otherwise steep and rocky terrain is easily hiked up, only when you reach just below the summit cross, you better go on top over a steep and narrow rocky summit ridge, instead of crossing the slopes. The ascent is quite easy, only a section or two require some additional care. Difficulty rating would be T2/T3, 2 hours. 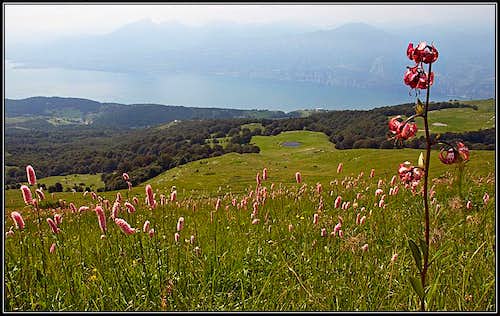 A very nice approach - here a detailed description. This is the southern part of the great Monte Baldo crossing. Considering only the ascent on Cima Valdritta, this approach is longer than the northern one, and also starts lower. Actually, if you use the cable car from Prada, you can start the tour on 1815 m, otherwise you start on the parking place near Pozze di Pralungo, 1300 m. The whole approach mainly follows the main ridge, the summits in it can be either crossed or detoured. Very nice and panoramic, difficulty mostly T1 and T2, only in the upper sections a detail or two of T3. 4 hours.

Rifugio Telegrafo, 2147 m, south of the summit with the same name, can be reached by good marked paths from the east and west. But those tours already belong to Punta Telegrafo, and not so much to Cima Valdritta, which is another 1 hour walk towards the north.

Drive by a mountain road till the highest parking place above Prada, cca 1300 m. Perhaps sleep there. Leave bikes on the parking place and drive early in the morning down to Garda lake and to Malcesine cable way. The cable way brings you up on the main ridge, 1760 m. Then go southwards all the way by the ridge (above routes #1 and #4). Ascend as many elevations you wish, and certainly the highest one, Cima Valdritta. After descending to the parking place, you only bike down to Malcesine. If a clear weather, you will remember that day!

This is the combination of the above routes #1 and #2. Park at Malcesine cable car middle station, take the cable car on the main ridge, 1760 m, and start walking there towards the south. Ascend Cima delle Pozzette, 2132 m, and continue by and below the main ridge soutwards, on Cima Valdritta. Then descend on Forcella Valdritta and across the W slopes back.

Leave bikes on the eastern road, where the normal ascent on Cima Valdritta deters up (see the above route #3). Then drive by car further till the parking place below Bocca Tratto Spino, 1450 m, and start the tour there. Gain the main ridge on Bocca Tratto Spino, 1720 m, and continue by the main ridge southwards (the above route #1). Then from Cima Valdritta descend directly down on the east road and bike to the car. That's a half day tour.

On Monte Baldo there are many mountain huts and restaurants. Along the eastern road there are also many alpine pastures with huts. For longer crossings of Monte Baldo range, really useful are only the huts on the southern part (unless you include in the crossing also the northernmost area of Monte Altissimo di Nago, where you can find Rifugio Bocca di Navene and Rifugio Grauzani). Those are: > Rifugio Telegrafo, 2147 m. Standing on a very nice ridge, below the summit with the same name. Reachable in 1 hour from the upper cable car station. > Rifugio Chierego, 1911 m. reachable in 15 min from the upper Prada cable car station. > Rifugio Fiori del Baldo, 1815 m. Near the upper Prada cable car station.

Please add more information, especially if you have the following: > Winter ascents and eventually skiing from near Cima Valdritta. > More details about the NW (descent) route.