Communion With The Sun 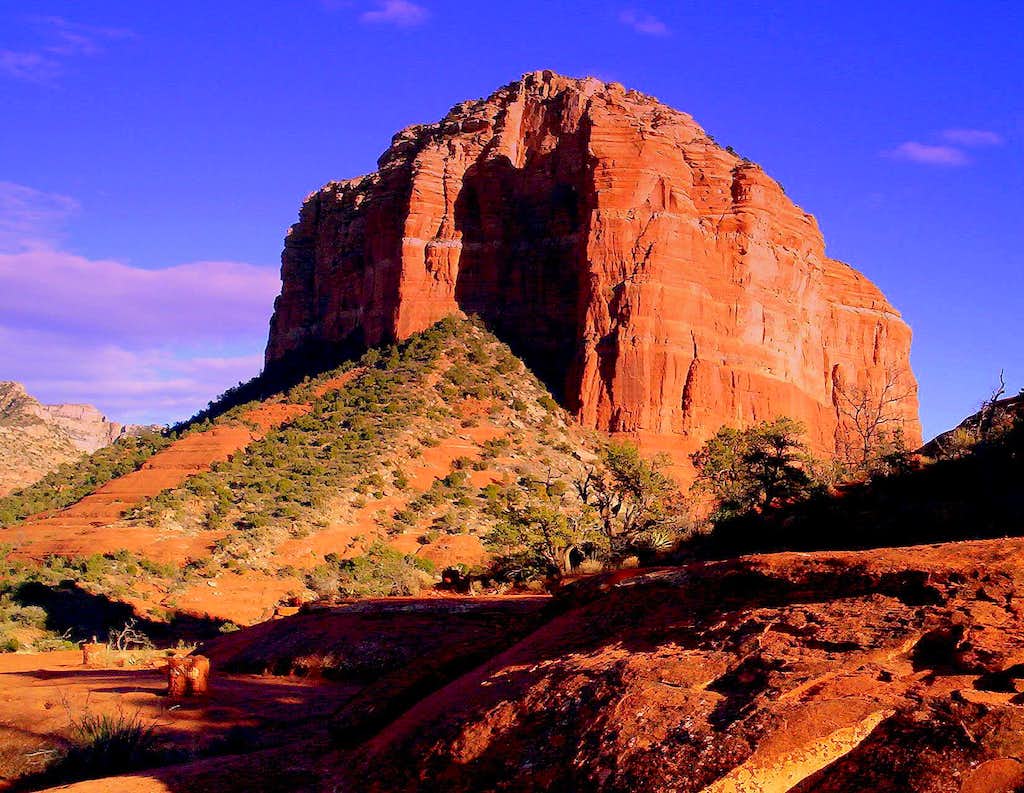 A descending sun illuminates Arizona's Courthouse Butte. The 2,500 foot cliffs surrounding Sedona reach up to the 6,800 foot elevation of the Colorado Plateau. Once again, climate played a pivotal role in the shaping of Sedona's landscape. In the 85-million years between the deposition of the Redwall Limestone and the Coconino Sandstone Formation, the region was gradually changing from a wet tropical climate to an arid desert dominated by barren sand dunes. As greater quantities of windblown, iron-free sands were deposited on an area comprising most of Arizona, Utah and western New Mexico, the (ancestral)Pedregosa Sea filled in, retreated southeastward, and eventually disappeared. Sedona was located in the center of a large inland sand dune desert, much like the Sahara Desert. Because of its larger grain size, iron oxides passed through Coconino Sandstone, allowing it to retain its "beige-colored" sandy color. Not so with the fine-grained sandstone making up Courthouse Butte. Iron oxide seems to have made its home deep inside "The Court of the CRIMSON King." January 9, 2009
« PREV NEXT »

for us twenty-first century schizoid men!

Re: A healing vision..

You get an A+ for the whole project Larry. Isn't it about time you did a melodious geology degree?

No, I think it's about time I went on a
vacation to the Canary Islands!

You want something more yellow or a cool breeze? BTW Why don't you put this irresistible pic under the Red Curtain? That shapely talus cone...

I want something a bit more green and aqua-
marine blue. (But red's the best I can do!!)

A cool breeze blowing off the ocean would
feel rather refreshing right now.

Does it sound 'magnanimous???'

Absolutely. What's more, I suspected you were actually green inside - kind of reversed watermelon. Now that I've read your comment on Bob Sihler's great article that's currently being advertised, I'm absolutely positive about that.
Cheers
Jacek

As long as nobody drops me from a 10-story
building, I guess I'll be okay! Take care!!!

I was just feeling the sudden urge to sit
barefoot on the front porch with a dog named
"Sloan" and hold a large piece of juicy watermelon
in my hands; its JUICE dripping down my chin as I eat it! Emmmmmm so YUMMY!

Watch out!!! It's like devouring your anti-Larry and threatening your balance, not to mention the SP equilibrium

I better stick to mangoes, papaya and guava!!!
Better to be safe than sorry! : )

And ... in the midst of all the chaos, perhaps I can save a piece of myself for
another day. End of the story!!!

End of Hisstory (and the Last Man) (FFukuyama,1992)
(Don't think the planet will let your wallstreetwise America have the last word any more.) THAT'S THAT.

That is NOT that - like I said, I had no choice
in the matter. My ancestors made the choice to
struggle, face many hardships in their quest
for a better life here in America.

I do appreciate what they did. I wish mine had as well. But in those days freedom didn't include freedom to print as much money as you need, did it? Take care of your freedom Larry!

Americans are too powerful :DDD