The Sedona area is not large and it’s a little complicated to define precisely. Geographically, it begins as the southwestern edge of the Colorado Plateau drops off into central Arizona. Water flowing down from this plateau has formed at least thirteen named canyons and carved numerous buttes and mountains in the northern area of Sedona. On the east, the Sedona area is bounded by the famous Oak Creek Canyon and, further southeast, by the mass of Schnebly Hill and the long curve of Woods Canyon. To the northwest, beautiful Sycamore Canyon separates Sedona from the Colorado Plateau. But to the south and southwest, Sedona seems to simply peter out into plains. It’s famous, though strikingly small once you explore it.

And yet, if you were to draw a circle with a nine-mile radius and Capitol Butte at its center, you would find over seventy separate summits. I’m fairly certain that there’s not a person, dead or alive, who’s visited them all - and with very good reason. Despite the beauty of Sedona, the rock is frequently untrustworthy and the summits can be exceptionally difficult to reach. Compare Colorado’s “Fourteeners,” if you will. All of those have trails, and perhaps a few require fifth-class climbing. Of Sedona’s summits, the majority have no trails and are 3rd, 4th class, or harder by their easiest route. Several cannot even be scrambled and require expert technical skills. For example, the standard route up the Cibola Mitten is a runout 5.9, and the line up UN 5500 is a terrifying 5.11X. 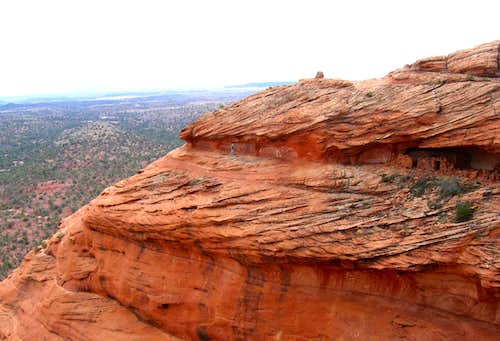 Of the Sedona summits, only a few have trails to the top; the others require navigating huge cliffs, kicking through dense underbrush, and clinging to loose rock. With rare exceptions, these climbs are incredible adventures that I doubt I would want to have again this decade. And excluding the mountains with trails, I would hesitate to recommend any of these summits to other hikers and climbers. The dangers – objective and subjective – are very high, and the potential for serious injury or death is great. However, if this is your kind of thing, have at it! I’ve given the warning and my work here is done. Without further ado I give you the mountains. 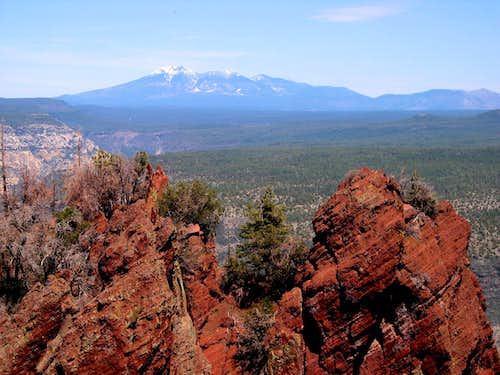 Looking north from the summit of Wilson Mountain

Wilson Mountain (7,122) is the highest summit in the area, and the only one over seven thousand feet. It towers above Oak Creek, which flows by Wilson’s complex east face. Like many high Sedona peaks, Wilson Mountain is comprised of a huge, flat summit buttressed by cliffs hundreds of feet high. 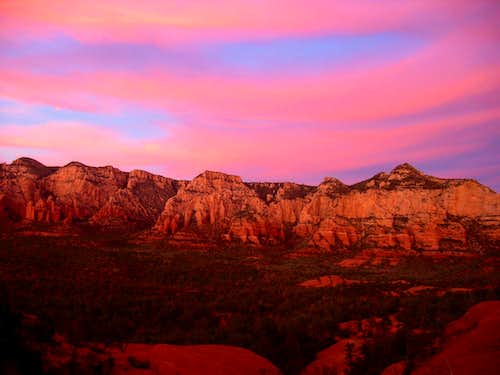 
The summit plateau of Munds Mountain (6,834) is well over two miles long, north to south. The incredible western side of this massif has at least eleven distinct ridges and countless towers and spires. Munds is the other high Sedona mountain with a trail to its summit plateau. 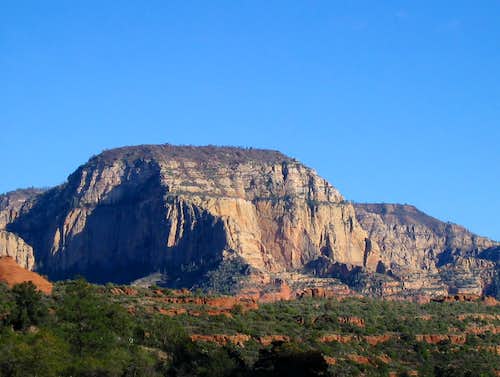 
Lost Wilson Mountain (6,762) is a satellite peak just northwest of Wilson. Thousand-foot walls protect its summit, which sits in the middle of a huge, dense jungle of manzanita. Lost Wilson is not (nor was it ever) lost – rather, the name refers to its being seldom seen. 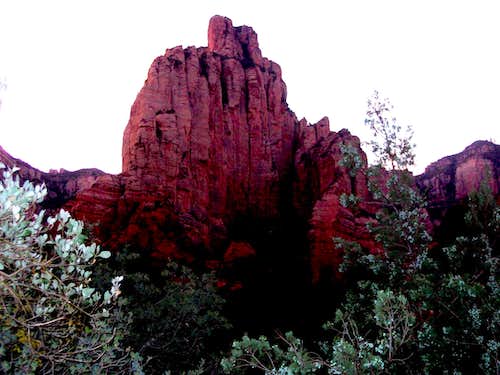 Towers on the southern escarpment of Maroon Mountain


Colorful, immense cliffs surround lofty Maroon Mountain (6,666). This peak, which is made up of some of the most impressive towers in Sedona, sits between three major canyons – Long, H.S., and Secret. Above the canyons the underbrush is thick; whichever way you go up, accept the fact that you’re going to bleed. 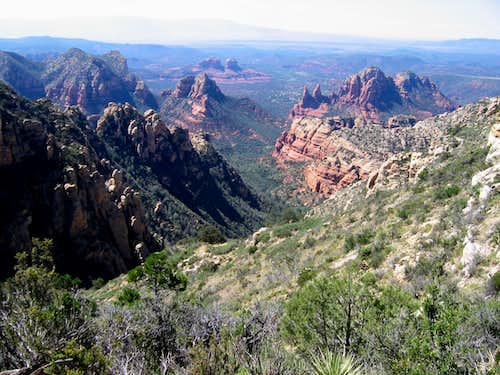 Looking down into Sedona from Lee Mountain

Lee Mountain (6,592) lies just south of Munds Mountain, separated from its larger neighbor by a jagged, rocky ridge. Fires burned nearly to the summit in the fall of 2007, scorching fifty acres. Lee, huge in mass, is southmost of the highest Sedona mountains, and its long, curving west ridge holds three more Sedona summits. 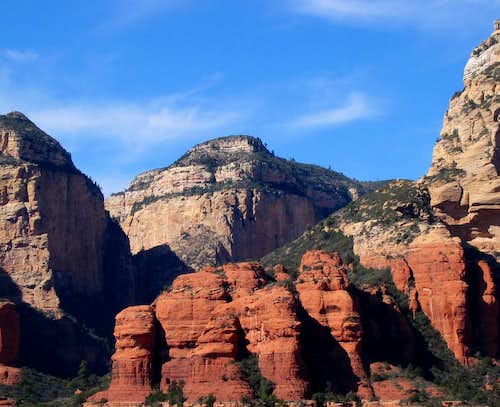 Hidden away in the shadow of Secret Mountain, the rarely-seen Lost Mountain (6,583) towers at the end of Boynton Canyon. Less than a quarter mile lies between its higher north summit and the canyon floor a thousand feet below, and soaring, intimidating walls guard the mountaintop on all sides. 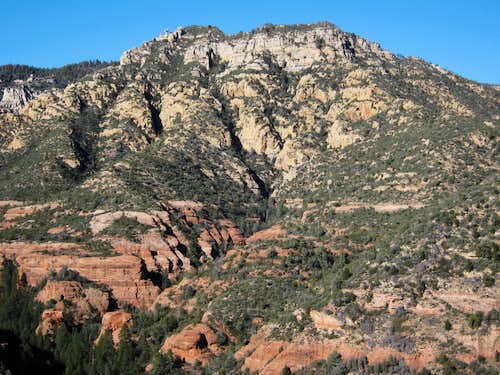 The south face of Manzanita Mountain


UN 6564 - "Manzanita Mountain" lies in the Sedona backcountry and is the northmost of the high Sedona summits. Rising between Bear Sign and Dry Creek Canyons, it is hidden from most other places in Sedona. And most of its approaches are a climber’s nightmare of rotten rock and tangled underbrush. 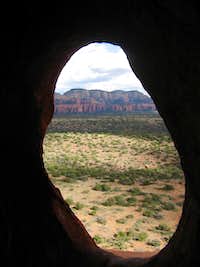 Bear Mountain seen from the west

Though numerous sources will tell you that the Bear Mountain trail takes you to the summit of its namesake mountain, this is false. Bear Mountain’s north summit (6,562) is the highest of two summits on the mountain and lies a little over a mile north from the end of the trail. But this is a round trip that requires a painful bushwhack, exposed climbing, and at least a few hours to complete. 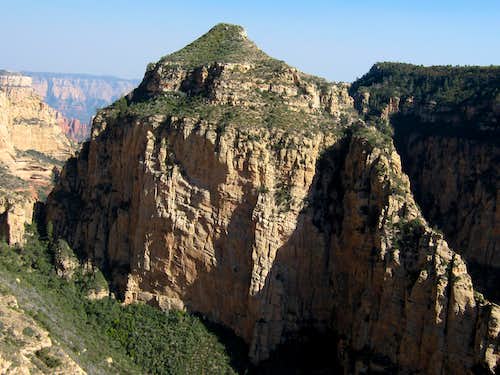 The steep north face of the Fortress

UN 6549 – “The Fortress” – lies between Bear Mountain and Lost Mountain and is joined to both by exposed, fifth-class ridges. It’s one of the few high Sedona summits whose summit is not flat. The Fortress overlooks Hart Well Canyon on the west and drops off with improbable steepness into Boynton Canyon on the east. 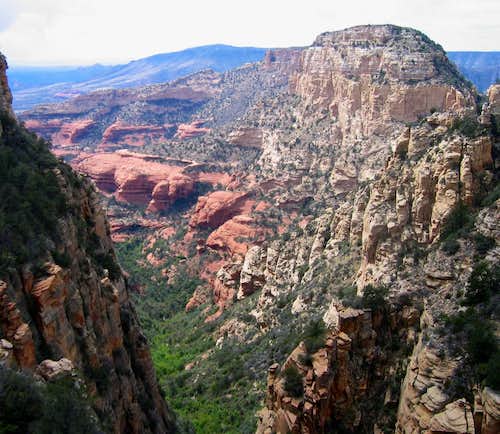 
Lost Mountain’s south summit (6,537) is separated from the rest of the mountain by a steep notch. As on the north peak, towering cliffs protect a flat summit plateau. And from the summit – should you reach it – you can stare down over 1500 sheer feet into the northeast fork of Hart Well Canyon.

I used the popular three-hundred-foot rule to calculate Sedona’s summits. This rule basically means that a summit has to be at least 300 feet above any saddle connecting it with a higher neighbor to be considered a separate mountain. Although I dislike such rules – who’s to say a certain point is a peak but one a foot lower is not? – there must be some definition, or else every bump on any given mountain is a separate peak. Or none of them are. The problem with this, obviously, is that the arbitrary number determines what is a summit. If the rule was changed to 400 feet, suddenly Sedona and numerous other places would “have” many less peaks and summits – if it was changed to 200 feet, they would have more (something I would not be averse to!). So this list is a starting point… and little more. 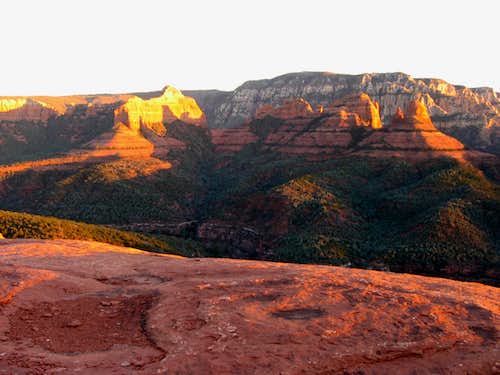