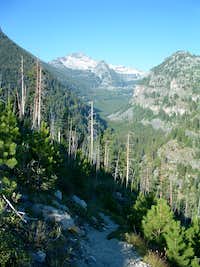 Como Peaks from beginning of trail

The Como Peaks are a group of three high points situated above and to the south of Little Rock Creek Lake. The west peak is the highest at 9,624, the middle peak is 9,530, and the east peak is the shortest of the three at 9,485. Although these three very-recognizable peaks can be seen from many points throughout the Bitterroot Valley, very few have made the effort the climb them as there is no established ascent trail.

Even during the hottest summers, the Como Peaks cirque is likely to retain snow fields well into August. There is speculation that a rock glacier exists high in the north-facing cirque, though I cannot confirm that beyond a shadow-of-a-doubt. What I can confirm is that several small streams flow from high in the cirque even when all snow appears to have melted away, something which would seem to suggest the existence of a rock glacier. 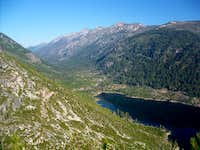 Lake Como from near trailhead

On US Highway 93 go about 12 miles south of Hamilton and turn right (west) onto Lake Como Road. Follow the road to a junction and turn left (south) toward the boat loading area just past the dammed end of Lake Como.

When the road turns to gravel, you should see a sign for FR 550 and the Little Rock Creek Trailhead. Follow FR 550 for approximately 3.5 miles (south and west) and a second road junction.

Take the slightly rough, single-lane road straight ahead (west, don't turn south) and follow it the short distance to the marked trailhead just before a sometimes-locked Forest Service gate.There are parking spots for several vehicles but no restroom facilities. 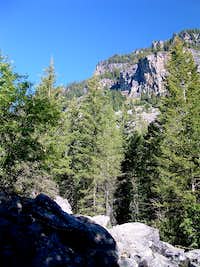 The north wall of the canyon

The Forest Service does not perform annual maintenance on the Little Rock Creek Trail, though there were signs that a fair amount of work had been done to the beginning and middle portions of the trail when I last visited on July 21, 2006.The trail begins with a slight gain in altitude before giving up over 600’ of elevation as it drops to the bottom of the Little Rock Creek Drainage within one mile of the trailhead. From this point until you reach the lake, Little Rock Creek runs along the north of the trail, sometimes close enough to see it. You can always hear it rushing along to your right (north). 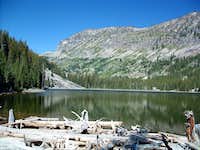 As you move through a fairly thick forest full of undergrowth, some of which is doing its best to encroach on the trail, the trail begins to reclaim elevation at a steady pace. For the most part, the forest hides any views of the rock walls bordering this section of trail, though there are one or two spots where a hiker can catch a glimpse of the rock formations, cliffs, and ridgeline through the trees.

As the trail gains elevation you enter an especially thick section of forest along the southern wall of the canyon where water runs into, along, and over the trail. It was clear that someone (probably the Forest Service) has made a recent effort to improve this section of trail by removing much of the debris and the downed trees since I had visited during 2005. The trail is now easier to follow through this section, but it’s still very wet. If your shoes aren’t waterproof, you will certainly get wet feet. 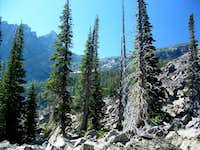 To reach the cirque, you have to cross this talus field

As you cover the last section of trail before you reach the lake, the woods begins to open up and affords some spectacular views of the canyon walls on the north side of the trail.A short easy climb up and over a granite headwall marks the end of the trail near the lake’s dam at the eastern end of the lake.

Now the fun begins. From this point on, there is no marked trail. You’re on your own for the two(2) miles to the saddle between the middle and west Como Peaks. 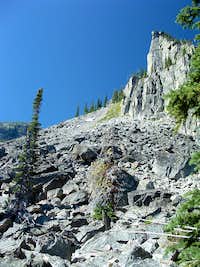 Route along the north buttress.

Leave the dam area by bushwhacking directly south up a slope covered by trees and undergrowth. After just a few hundred yards, the undergrowth gives way to a more open forest where you will climb over fallen trees and slabs of granite. Less than a third of a mile from the dam, you will leave the woods and begin some serious boulder hopping as you enter a large field of talus spreading downward from the east face of the north buttress to West Como Peak.

As you move upward stay as close to the bottom edge (east side) of the talus as possible, but not low enough so that you run into the several cliff faces which attempt to bar your way to the upper cirque. Do your best not to get too high (west) on the talus as it will make your ascent require more energy and increase the difficulty. Of course if you prefer difficult, by all means go for the ridgeline of the north buttress to West Como Peak (up and west of the talus you’re crossing). Traveling along the ridgeline requires mostly Class 3 scrambling interspersed with enough Class 4 moves to keep you on your toes. Great views, too. 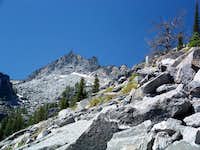 Ridgeline of the north buttress

About a mile and a quarter up from Little Rock Creek Lake, you will reach the portion of the cirque where you can get a break from the rocks and rest your legs by walking on actual turf. There are several streams flowing through the area, so if you’re short of water, this would be the place to fill up.When you reach a point about a quarter of a mile from the saddle you will once again be on rock, some of it scree. Don’t kick any rocks down on the heads of your climbing partners as you climb up the slopes which approach a 70 percent grade for the last hundred yards. 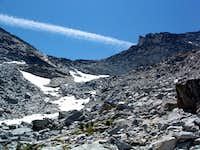 As you reach the saddle, the western-most peak is on your right (west) and the middle peak on your left (east). The eastern-most peak of the Como Peaks just peeks over the ridgeline of the middle peak.The easiest assaults on either the Middle or West Como Peaks would commence from this saddle. A trek to East Como Peak from this saddle would require either an approach over the Middle Peak or a climbing traverse around it. Either way, I suspect reaching the East Peak’s summit from this saddle would require a serious output of energy.

Water-proof shoes or boots are suggested for the trail to Little Rock Creek Lake. The climbers’ route requires lots of rock climbing and boulder hopping, so make sure your footwear is also sturdy.

From the trailhead, it takes a fairly long time to reach the saddle between Middle and West Como Peaks. Be sure to carry plenty to eat – you’re going to need the fuel.Otherwise, come equipped with “normal” hiking/climbing gear.There are some especially interesting rock formations along the ridgeline of the north buttress to West Como Peak. If you plan to climb them, bring the equipment you expect, or think you might want, to use.

Profile of approach route to beginning of Climbers' trail

An ascent of the Como Peaks could take place any time of year. When there is little or no snow cover, the climbers’ route will entail plenty of boulder hopping and Class 3 scrambling.If attempted on snow, you should have crampons and an ice axe at the very least. If attempted early in the winter season before the snow has had a chance to consolidate, snowshoes would be helpful to prevent post-holing. Unless you actually like climbing very steep slopes on skinned skis, I doubt that skis are a good choice for this route, anytime.

I should add that a spring ascent using this particular route may be preferable to a summer attempt. The Como Peaks Cirque receives very heavy snowfall, something which will minimize the amount of boulder hopping and scrambling over talus required to reach the saddle. From the saddle upward, the winter winds generally keep the ridgeline pretty clean of snow and ice.

Profile of climbers' route to saddle

Be advised that to attempt this route in the winter, you should be very comfortable on snow and familiar with its dangers. Attention to avalanche danger during the approach to the cirque, then knowing how to move along wind-swept ridgelines and their snow cornices are minimum requirements.

For an up-to-date avalanche forecast, check the link below from December through March.