Crossing Gran Monte - Stol range is one of the most beautiful hikes in Julian Prealps. I recommend to do it in early summer, when the slopes are full of blossoming flowes. Of course, also clear autumn days can be an option. As proposed on the main page, crossing this beautiful ridge can be done by different logistics. As the whole range is more than 30 km long, getting after the completed tour back on the starting point is not just a matter of an hour or two. Basically I proposed two variants:

See the main page of Stol - Gran Monte, to see, how to get to the starting points!

Rating the Tour (By Hiking Standards)

0. General: To do the whole range is a long and enduring tour. The times are written below in the description, at each respective section. Except on the first part of the ascent and the last part of the descent, we are moving all the time over an open terrain, so we can enjoy an unsurpassable panorama. Hiking paths are generally not difficult. But a few places are a bit exposed, the path goes over a narrow ridge or over steep grassy slopes. Those, who can master a medium hard hike can have no fear.
1. Effort: A two-days tour. The legth depends on the variant.
2. Power: 1 - No difficulties.
3. Psyche: 2 - Easy. A few steep places.
4. Orientation: 1 - No difficulties (well marked, and by the ridge anyway). 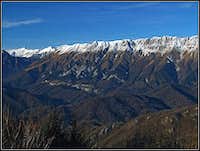 From a personal experience I know only the ascent from Monteaperta. The northern one should not be harder. You start the tour in the village, by a fountain above the church, where you see the inscription for the path No. 710 (the path No. 711 starts a bit lower in the village). A nice path soon exits the village, crosses the ravine and starts ascending up by a beautiful side crest, covered with woods. Higher the path turns once left into the ravine, does a short scree and rocky section and soon returns again on the ridge. You keep ascending up in many turns, until you reach a hunters observation point. From there you already see the grassy upper slopes. The marked path continues ascending by the grassy ridge, which now start getting a bit steeper. The panorama is broader and broader, decorated by the last trees, growing on these southern slopes. When the path reaches the steep upper slopes, it starts turning slowly towards the left, crossing the steep grassy slopes above the distinct ravine, which we see all the time left of our ridge. Actually here the path uses a steep band, ascending upwards. Just before reaching the ravine, the path turns up again. We already see the nearby summit of M. Testa Grande, 1556 m. A few more steep meters and we reach the main ridge. The panorama on Musi/Muzci range and on Kanin mountains opens. This point on the ridge is also the one, where the northern ascent comes up. 3 h till here.

From here on we follow the main crest all the time towards the east. We almost have the altitude, but the crest to the highest point of Briniza/Brinica will take us another good 30 minutes. It goes up and down over a few less distinct elevations, some sections of the path are steep and rocky and require some care. It is still a hiking route, but on several places we use hands to maintain balance. In winter, steep sections can be tricky if covered with hard snow or even ice. From the summit of Briniza/Brinica we see the next section clearly ahead. The next elevation is still steep to overcome, especially descents into notches go over a few rocky sections. Then we have only gentle grassy slopes down to the big cross on point 1540 m (Forcella Kris). This is the point on the main ridge, where from Monteaperta a broad ex military path (mulatiera) over the south slopes of Briniza/Brinica comes (marked as path No. 711). 1 h for crossing Briniza/Brinica. 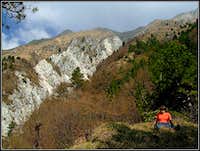 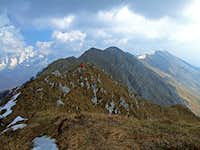 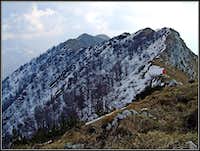 From Forcella Kris towards the east you first go by the main ridge, then the marked path No. 742 detours a few grassy bumps. Soon in the basin on the northern side you see the big, renovated Ricovero Montemaggiore. You'd be down by it in 15 minutes, but to continue the crossing, you keep by the ridge. The slopes are grassy and broad, on Punta Lausciovizza / Lanževica, 1620 m, you feel almost like on a high plateau. East of its summit from the left again another marked path from the hut joins. 30 min till here. 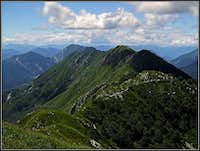 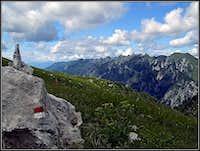 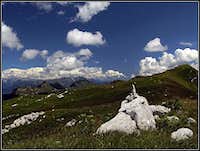 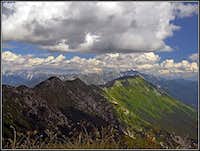 Great view towards the E from Montemaggiore

The ridge further to the east is similar. You descend just slightly, and then go up again on the distinct summit. Punta di Montemaggiore / Breški Jalovec is a bit indented, there the ridge turns towards the NE, so from the summit we have a great view along the range on both sides. For the first time we see Stol in the distance. Nearby is the rugged ravine of Rio Bianco / Beli potok, one of the two tributaries of Nadiža / Natissone river. Descending towards the NE, we soon reach the saddle, where the paths from the south and the north come up.

From there a forrested part of the path continues. We are still losing the altitude a bit, but never go below 1400 m. While going through the woods, it is worth stepping a few meters towards the right, on the edge, and have a look down into Rio Bianco / Beli potok ravine. After passing that place, we cross the Italian-Slovenian border, not even noticing that (notice the stones). Along the border we do a nice ascent over grassy slopes, in July all covered with daffodils, and reach the rounded summit of Gnjilica. This part of the ridge is very neglected as in the past because of the state border nobody was walking there. From Gnjilica it is only a short jump on Nizki vrh, after which we descend on a grassy saddle, where we find the first tables with Slovenian inscriptions. Besides the two ridge directions, an arrow points also down into Breginj basin. 1 h till here. 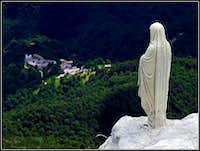 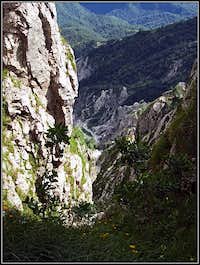 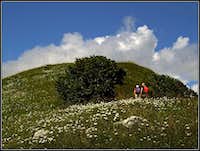 After the saddle below Nizki vrh, the ridge becomes somewhat more narrow. We can follow the path, but it is not a strong one. On a few places it goes on the steep, grassy southern slopes, on other places through the woods on the northern side. We do some ups and downs, crossing the summits Nad Ohojami and Kopa. Over the fore-summit the path ascends more steeply up again, over a few rocks we reach the highest of the two Musci summits. Below in the saddle we already see the roof of the bivouac. 45 min. 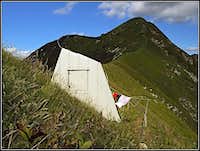 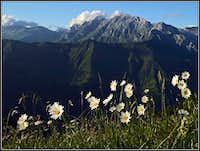 We came in July, the Saturday was perfect and the chances that we will be alone in the bivouac were minimal. But nobody was there. We still have some 2 hours of warm evening sun, some good wine in backpacks, after a feast I go to enjoy the sunset from the neighbouring Mali Musc. Then slowly the world around sinks in darkness, down in towns and up on the sky lights turn on, and suddenly also a big orange comes from behind the ridges. I have never seen so red moon. Long into the night we have a chat in the bivouac and the next day we are staying in long, as all the mountains are in clouds. 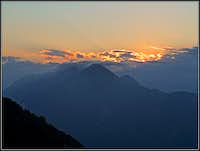 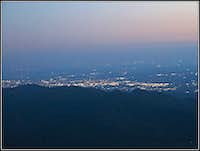 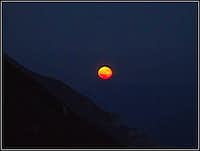 5. From the bivouac over Stol 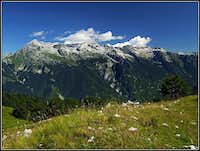 The first short ascent brings you on top of Mali Musc, from where you clearly see the ridge in front of you. It starts lowering considerably, at first 100 m to Ribežni, then another 100 m to the part below Puntarčič. You already think that Stol is close, but the path still does some winding. The ridge becomes a small plateau, near Njivica from the right, from Breginj, the marked path comes up. Now we are already close to the highest point of the range. Some 15 min more and we are standing on top, by the building, which is not used to serve hikers.

On the descent we continue in the same direction. The ridge is broad, on some places plateau-like, we are descending mostly close to the slopes above Breginj. At the end we hit the mountain road close to the point, where paragliders take-off. There's a big pano with instructions for them. By the road we continue to the saddle below Mali vrh, or to Božca alpine pasture. 2 h to Stol and 45 min down to the saddle. 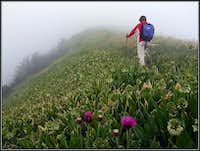 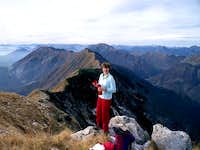 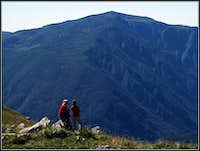 If we have bikes, or go down into Učja valley by other means, we turn on the saddle left. The continuation of the ridge further towards the east, to Kobarid, is unknown to me. At first you see a mountaind road, crossing the slopes above Breginj, and the path is all the time marked.

Good shoes and poles. If we rely to get a place in the Musci bivouac, we don't need much more of the equipment. Sleeping bags are useful anyway, even if in the bivouac there are blankets. For the bike & hike tour you'd need a bike, of course. Also a trekking bike is a good one.