This is the shortest and easiest ascent route on this abandoned, panoramic mountain. On this tour you will experience one of the most beautiful trails through pine woods, a grassy high saddle with many remains from the World War I and a steep scramble with some best passages seeking to climb on top. And, as said, the reward is one of the best views in Julian Alps - from the NW on the mighty Montaž. This route can be nicely combined with the other ascent from Dogna valley - from Chiout you go up to Bieliga alpine meadow, then cross over on Forcella Cuel Tarond, where you join this path, go on top of Cuel dei Pez and return by this route. That's a nice 7-8 hours hike/scramble up.

See the main page of Cuel dei Pez, how to get into the valley of Dogna! The parking place is above the hamlet of Mincigos, just by the bridge over the creek with this name. 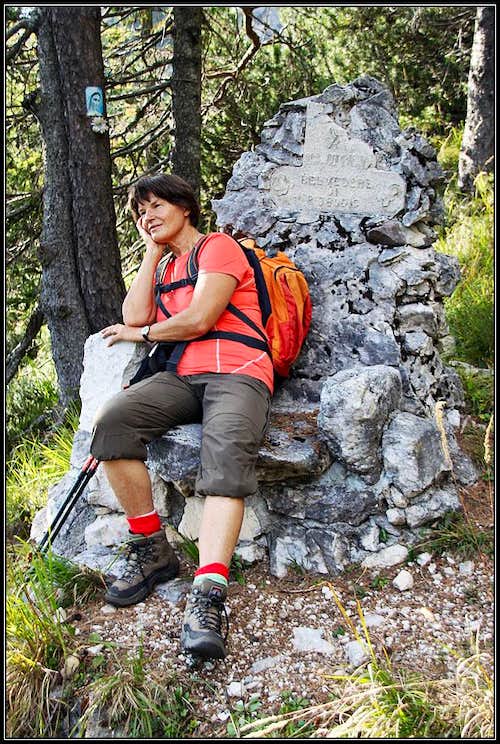 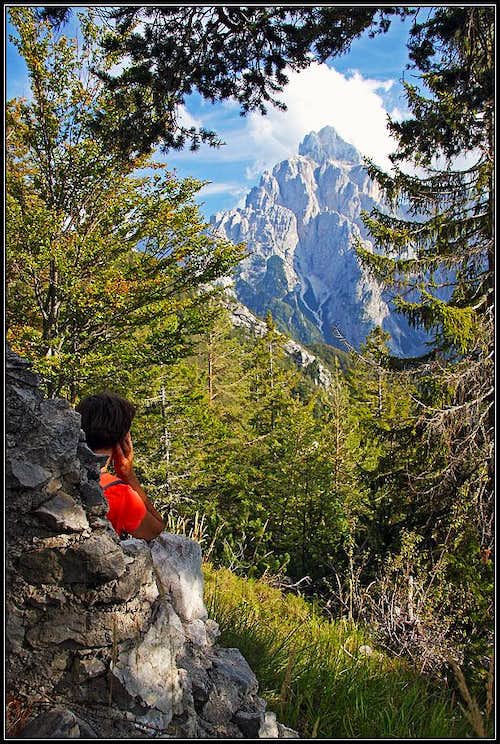 The view from the throne

On the eastern side of the creek the well marked path (No. 647) goes up from the road. This is a comfortable, well beaten and built mule track from the World War I. It's incredibly nice - narrow, never steep, thickly paved with pine needles, all the time ascending through nice pine woods, along a distinct ridge between Rio Mincigos and Rio Budic. In fact, it's even appropriate for mountain bikers. Perhaps not just every one, but for experts certainly. And occasionally they do use it. Before reaching the upper part of the ridge, there's on a panoramic corner a throne. A suitable rock was upgraded by the soldiers of the 269 company into a rocky chair, facing one of the most astonishing views in the region - the NW wall of Montaž. Not really all legacy of big wars is ugly - this is a place more for gods than for soldiers! Higher, when crossing the upper slopes, the path is ruined on one place - that's not drivable by bike and soon afterwards the path reaches the broad saddle - Forcella Cuel Tarond / Vančela. There are many ruins of buildings from the WW1, and the passage goes also on the northern side.

To climb Cuel dei Pez one must go right - towards the SE. The path first passes horizontally the slope, then starts to ascend in curves. The SW slopes of our mountain are covered with pine bushes. The path (Sentiero Battaglione Gemona) is clearly oriented towards a distinct notch in the side, SW ridge. Right of the notch is a big rock tower. The notch is the highest point of the path in this area. If we want to climb the summit of Cuel dei Pez, we must deter from it towards the north and scramble over a pathless terrain.

The first option to go up is the last scree field (steep and soft) before the notch - so still over the SW slope. Perhaps you can leave the path also earlier and go up towards the NW ridge. By either side of the scree field we ascend steeply up. A few passages require some care and choosing the best option. Above, the terrain is still steep, but more grassy and rocky. Just below the summit ridge you will even hit a path, probably originating from the WW1. On top there are ruins of buildings again.

The second option is perhaps to go on top directly from the notch. There are traces through pine bushes, but we haven't tried that passage. From the distance it looked possible (without harder climbing).

The third option is to continue from the notch by the marked path towards the east, and to ascend on top only when you already pass the summit for some 200 meters. By a steep, grassy slope (weak trails) you ascend up towards the SE ridge (carefully). When reaching it, you notice remains of a trench. By it and by the slopes left you go up, reaching the steep summit rock barrier. There you best go left, using a narrow ledge, which brings you in a steep ravine just below the summit. There you go directly up on top.

You best descend by one of these options. We went up by the SE route and descended by the SW screes.