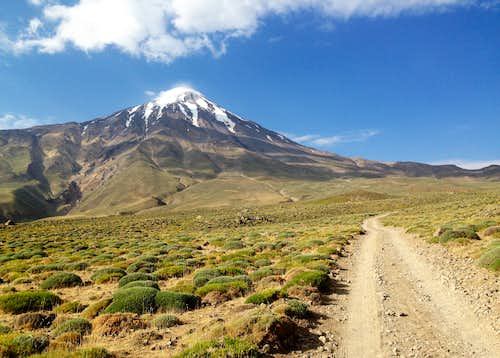 There are at least 16 known climbing routes, out of which four have some sort of hut or shelter:

South Route - the most popular and probably the easiest, with two huts/campsites - Goosfand Sara or Saheb Zaman Mosque, at around 3200m and Bargah Sevom at around 4300m.

West Route - a bit more difficult, has only one hut - Simorgh Camp at 4200m

North-East Route - the longest of the four, has one camp - Takht e Fereydoun at around 4500m. From what I understood, it is possible to carry some of your gear with donkeys or horses.

North route - the steepest and probably most difficult (out of these four), has two metal shelters - one at 4000m and the other at 4700m. 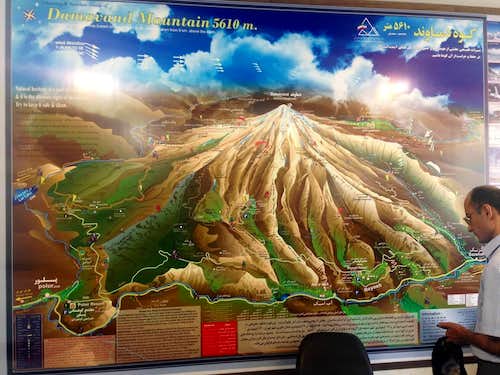 What I did was go for the north face, since I enjoyed the challenge, and I also thought it would be nice to cross the mountain, from north to south, therefore descend on the south face, which gave me the opportunity to see another side of the mountain as well. Below is my trip report, as detailed as I could make it, hoping that it might help future adventurers and will make their life a bit easier.

For me, once I settled on the route, the trickiest part was to find out all the information I needed, about the route. I was fortunate enough to have a friend that climbed Damavand two months prior, so she gave me her local contact, so I have someone to help me with the logistics of trip. As for the actual route, I found very few reports and details, I later concluded that due to this, usually only the locals climb from that side, since it's more remote.

I arrived in Tehran on Friday morning, after I got my Visa (I paid 75E for it, plus an additional 15E for an insurance that seemed to be mandatory). You can get the Visa on-arrival, in the airport. At the airport I was greeted and picked up by a friend/driver of my local contact - Mr Mousavi. He took me to a hotel, which was previously booked, courtesy of Mr Mousavi.

After a few hours of sleep (I have flown through the night therefore not sleeping much), I met Mr Mousavi, and we went together to Polour village, where is the Iranian Climbing Federation camp, from where I got my climbing permit (50$ US). After that we went further, going around the mountain, to get to the north side, to Nandal village, which is a small mountain village, with only a few hundred population, and - very important - nobody speaks any English! Having Mr Mousavi with me was very helpful, as he could translate what the locals were saying. There is a Mr Salehi there, I presume he's also a member of the Climbing Federation, from which you could also get a permit (in case you don't stop in Polour). He offers basic accomodation - two concrete rooms in which you can sleep. 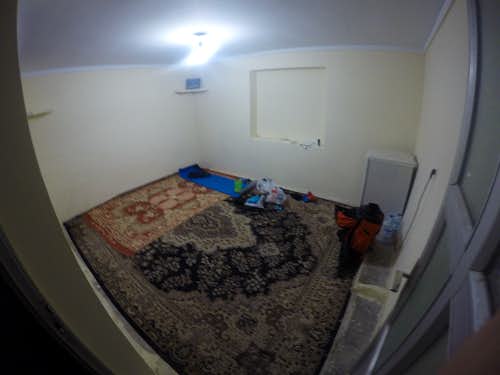 I got up early in the morning, since the other roommates got up at 4:00 am or something, as they went on the North-East route, and inevitably woke me up as well. Although you could in theory go with a 4x4 car to the start of the route, from Nandal, I was alone, everyone else had left, and nobody was awake anyway at that time (6:00 am). Since I had the course downloaded on my Garmin watch, I decided to go by foot (it's a 8km trek) to the foot of the mountain. My backpack, when I left Nandal, had around 16.5kg.

I reached Big Rock - 2900m (which marks the start of the route) in 2.5 hours. This is how it looks, so you know what to look for (shouldn't be a problem to see it anyway): 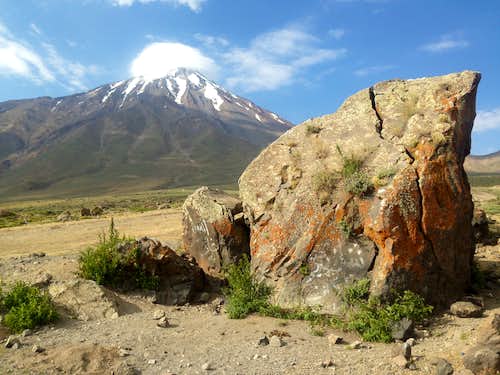 After a short break, I started to approach the mountain, following the course on my watch. After a while I managed to see the first shelter, a little red speck on the side of the mountain. The distance to the first shelter is not big (around 5km), but it's quite steep - 1100m of ascent. I reached the shelter at 13:00, unpacked, had some lunch at rested a bit. My initial plan was to sleep there the first night, and then go higher. However, since it was still early, and I felt good, with no signs of altitude sickness, I boldly decided to climb to the second one in the first day. To aid with the safety, I also brought a pulse oximeter, which measures your O2 sats, as well as your heart rate. My O2 sats were 90-91, and I felt fine.

After some rest, I packed up everything, and started climbing again, at 15:00. Between the two shelters the distance is even smaller (3-4 kilometers), but steep and rocky, with almost 700m of ascent. It took me 2.5 hours to cover the distance. I reached the second shelter, where I unpacked my gear and set up my sleeping bag. I met a few people coming down as I went up, first group after Big Rock, they were curious and a bit worried that I was going solo. The other group I saw descending on a path parallel to mine, from the second shelter (or even the top maybe?). So, everybody climbed down, and I was the only climber, on that whole side of the mountain, in that night. That made things a bit uneasy, however, my little oximeter told me I was still fine (75-76 O2 sats, which went up as I rested). In fairness, the only altitude sickness/issue I've had was the lack of appetite - I couldn't eat anything past the first shelter. But I was well hydrated, took an aspirine (one the night before starting, one in the shelter), so it wasn't a big deal. Couldn't get much sleep either, due to the solitude and the wind, which blew all night long (that brought the temperature inside the shelter to 5 degrees Celsius in the morning).

After a beatiful sunrise, I left the shelter, at around 6:15, and started the climb to the summit. There were around 5km from the shelter to the top, which took me a lot - 6 hours. I was still carying around 12kg, and at that altitude, you can feel it. My progress was slow but steady, I knew this works best, so I took my time, not stopping for long though. 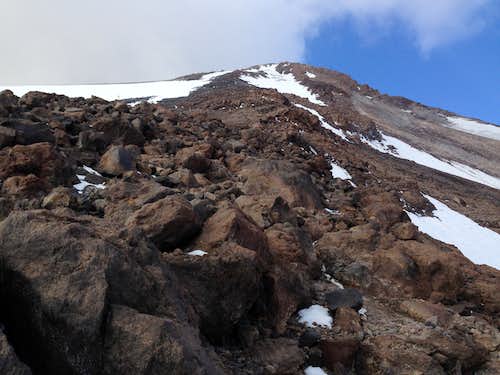 As I got higher, the peak got surrounded by clouds, and it got cooler. It's a tedious job reaching the summit, because when you reach what you see from below, you realise it's an outer rim, and not the end. You still have to climb to the middle, past some big rocks, until you eventually reach the crater rim. Well before that, because of the wind, I could feel the sulphur in the air. 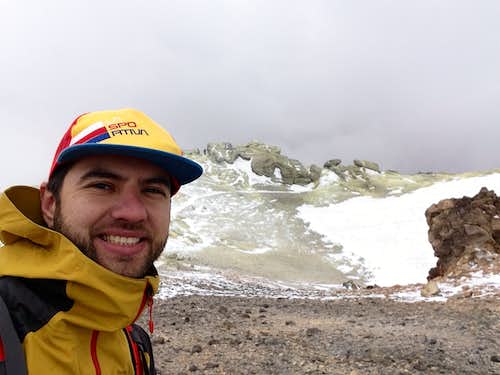 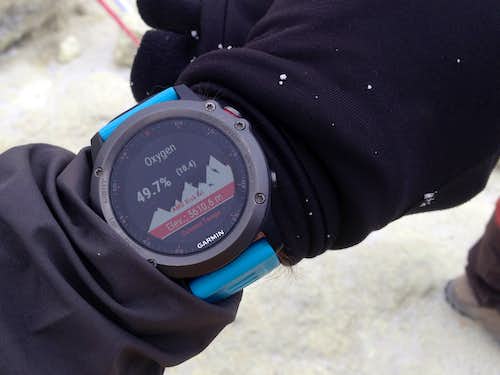 I reached the north summit at 12:00, caught my breath a bit, took some pictures and then traversed to the south side (the rocks seen behind me in the picture above), where is the highest point on the crater rim. The temperature was around 2-3 degress Celsius (realfeel). I took some pictures there as well, and then I started going down on the south side, which was filled with people, some climbing, some descending. I didn't have a course anymore for this bit but it wasn't too difficult to navigate.

On the way down, I felt a bit sick, initially I thought maybe it's from the lack of food, but I then realized it was the sulphur, I stayed quite a while in that area, and I was not feeling its effects. I stopped a bit, tried to eat something and then made my way down to the first hut from the south side, at 4300m. It was snowing mildly when I got to the top, on the way down it turned into a drizzle, but didn't last long. 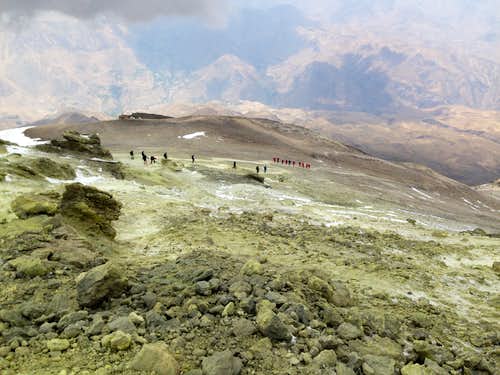 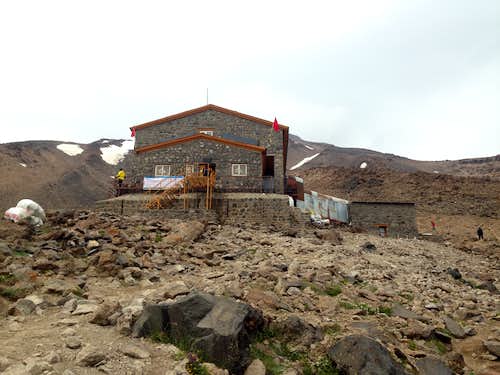 Once I got to the hut, I called Mr Mousavi, to let him know I sped things up, as this supposed to be a 3 day climb, and I was already on the other side, the second day at 15:30. He sent the driver to Polour, and after a short break, I started my way down to the lower hut.

This bit of the trek was very beautiful, gorgeous landscapes, with vegetation reappearing as the altitude dropped. 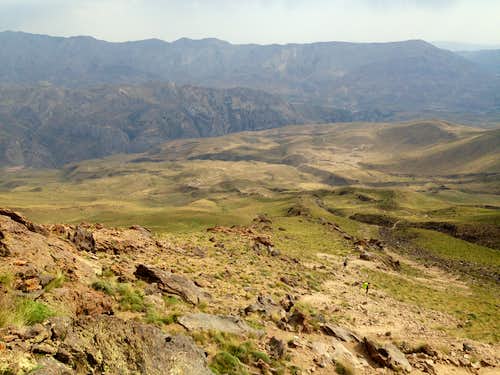 The overall distance was around 30km (including the approach from Nandal), with 3300m positive elevation. I started out with a 16.5kg backpack and had around 12kg on the summit. I felt very good, physically, the lack of oxygen and the heavy backpack means you get tired easier, but I was aware of this. I would advise though, if there's no rush, to do the climb in 3 days, taking your time, sleeping in the first shelter at first, and hiking higher for acclimatization. After move on to the second, climb a bit higher, then go for the summit. For those used to the altitude, it can surely be done in 2 days, especially if you come down on the same side, thus you don't need to bring everything with you on the summit.

Since I did the climb in the summer, temperatures are not that low, and since I tried to go as light as possible:

- 4 t-shirts and some sleeves

- 2 pairs of trekking pants and some thin overtrousers

- 2 pairs of gloves, two buffs and a cap

- 40 litre backpack, which I stuffed at its maximum

In terms of training, I had trail running as my main background, but 2 months prior to the trip, I switched from running to hiking with heavy backpacks, so I get used to the effort. In addition, I also added indoor cycling, some weightlifting and some flat running for aerobic training.

On a side note, I would like to add the Iran is a beautiful country, with very kind and helpful people, sometimes very curious maybe (it's not something dangerous by any means). There wasn't any moment in which I felt unsafe, in the cities. I would highly recommend visiting the country as much as possible, if you have the time, besides doing the climb. It's well worth it and you have plenty of places to see (Tehran, Isfahan, Shiraz, Caspian Sea).