This route will never be a classic, but it IS a great adventure on a rarely climbed face. It was included in the American Alpine Journal in 2003 after Loren and Jens did the first ascent in July of 2002. Dane and I did the second recorded ascent in July 2013...over ten years later. It includes spectacular glacier travel, moderate rock to 5.6, and an AI2+ pitch in a hidden couloir. If you are looking for a mountaineering adventure on a rarely climbed face on an incredibly remote big Cascade peak this is for you!

From Seattle head north on I-5 to Mount Vernon and continue east on WA Highway 20 (North Cascades Highway) to Marblemount and veer right onto the Cascade River Road just as the highway makes a sharp left turn. Go 23 miles on this road until its end at about 3,600 feet elevation. The final 3 miles are steep. From the trailhead, hike the "stupidly inclined" Cascade Pass trail which ascends 1,800 feet in 36 switchbacks to 5,400 foot Cascade Pass. This is the most popular climb in the North Cascades National Park so expect to see other people and rangers patrolling the area. From the pass, take the small trail to the south passing the "Toilet" signpost and continuing up through heather bushes and traversing on the slopes below Mixup Peak. At some point you will probably hit snow and many people use crampons on this traverse which marks the start of the Ptarmigan Traverse (if going north-to-south). Round the rib, drop 100 feet to the Cache Glacier and ascend the glacier to 6,950 foot Cache Col. This col is the higher, left col you see when on the Cache Glacier. The lower, more rugged right col is Gunsight Notch. Do not ascend to this col. It usually has a nasty bergschrund as well. 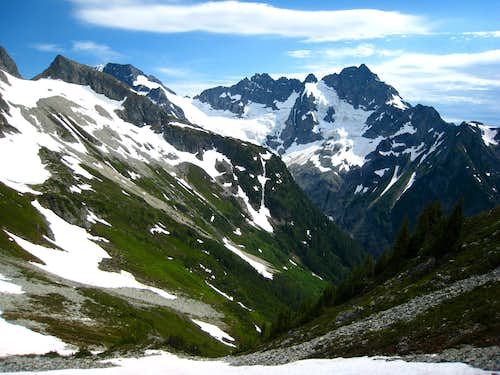 Once at Cache Col, locate the small trail traversing down to Kool Aid Lake, a small pond at 6,100 feet. This is the only logical place to camp in the entire area and this is also the typical first camp spot for people doing the full traverse. From Cache Col you can see Arts Knoll and once you arrive at Kool Aid Lake, it is the most noticeable peak you see above the lake. The hike from the trailhead to Kool Aid Lake typically takes between 5-8 hours. 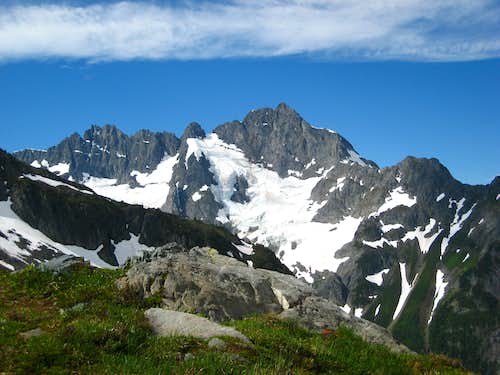 From Kool Aid Lake, hike on the Parmigan Traverse path and cross the Red Ledge. This ledge crossing can be somewhat difficult in early season. About a quarter mile past the ledge, descend down 600 feet to the 5,500 foot bench on the Middle Cascade Glacier between two huge icefall sections. Cross this bench and continue to the foot of the Formidable glacier. Ascend the Formidable glacier to the NE Face which is best done by traversing right to the northern end of the glacier and ascending the easier, safer section. There are many large cracks to weave around. Once at the top of the glacier look for a spot to cross the large moat. Be VERY careful here, consider an anchored belay for any crossing you may find. Late in the season, crossing this moat may be impossible.

Gain the rock climber's right of the fall-line from the summit and begin up loose class 4 rock covered in kitty litter. The rock is actually quite solid here but beware the scree that covers it. Below I will describe the way we broke out the climb...There are many ways to break it out depending on the length of your rope, and how much you simul-climb on each pitch. We used a 70 meter rope, made 8 pitches, and simul-climbed on a few of them.

Note that the First Ascent party in 2003 took a different route for our pitches 6 and 7. Once at the Duolith atop the 5th pitch, they continued through a notch right behind it, and continued to the north ridge to the right of the route we took. We met the ridge slightly closer to the summit.

Descend the standard South Route described very well by Klenke. Dropping down the south side of Formidable may require a couple rappels if you have never done the route before. Once you reach the Crossover Saddle, drop 100 feet down the other side to the Ptarmigan Traverse path and continue over the Spider/Formidable Col and back to Kool Aid Lake down the Middle Cascade Glacier.