(This is my first trip report, so bear with me!)
On Friday 6/26 our team of 3 headed out of Seattle to attempt Mt Rainier through the Disappointment Cleaver route, sleeping overnight at Paradise, and camping at Camp Muir on Saturday. The group consisted of me, my friend Chris (who I took a mountaineering course with) and his friend Vinay, who would be climbing Rainier for the 7th time (if we were successful).

We arrived at Paradise around 11pm on Friday night and slept by the car in the overnight parking lot, to have a full night's sleep and be at the ranger station when it opened at 7am to get a camping permit. The night view of the mountain was magical. 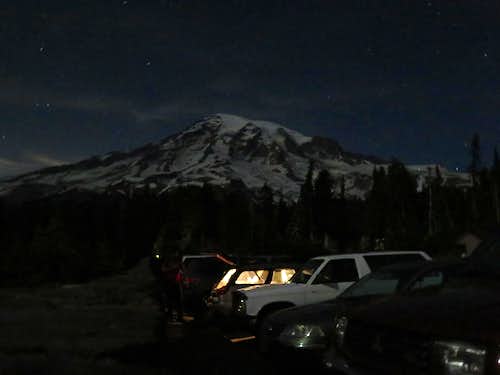 Woke up on Saturday morning to great weather (low 70s) and got to the ranger station at 7:10am. Given the good conditions weather, we had expected groups to be lining up for the camping permits and so were a little worried we were late, but there were only a handful of groups ahead of us. I already had an individual climbing permit for going above 10,000 ft. but my friends had to purchase them for $45 each.

We left Paradise after an all-you-can-eat breakfast at Paradise Inn around 9:30am. Our average backpack weight was around 37lbs, which included a 80ft. rope, a 3 person tent, 2 pickets, a shovel and a stove for group gear. It took us 4 hours to get to Camp Muir following the Skyline Trail. The snow was pretty good on the Muir Snowfield and there were lots of skiers going up with us. We got to Camp Muir around 1:30, set up camp, melted some water, talked to the ranger (who said there might or might not be a thunderstorm coming in and warned us about the August-like conditions above the cleaver) and went to sleep around 4pm (at least I did). It was pretty warm (~low 60s) at Camp Muir, with some mild wind. The sleeping mask I brought as a luxury item turned out to be a necessity for getting enough rest. 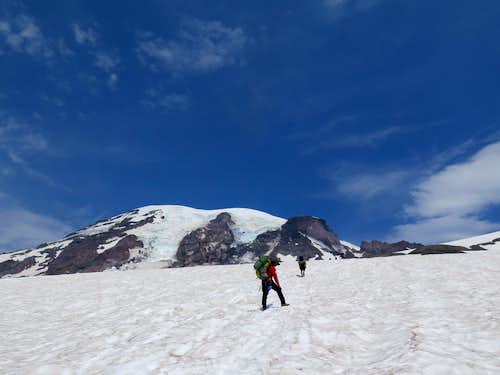 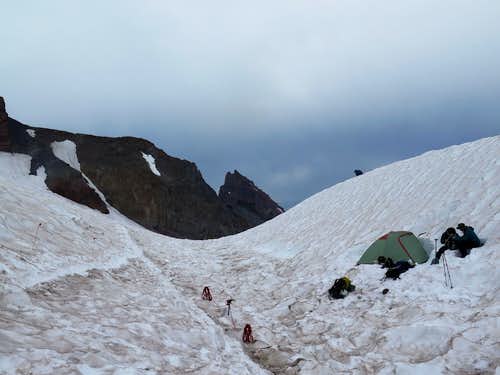 We woke up again at 10:30pm, packed some stuff for the summit and left camp at 11:30pm. There were already some teams ahead of us, and more following (may with the guide services). I'd say our pace was average. The Disappointment Cleaver was falling apart, and with so many teams on the route we heard "Rock!" all the time while on the cleaver. We had to be constantly vigilant of some of the teams ahead knocking off big rocks with their crampons. 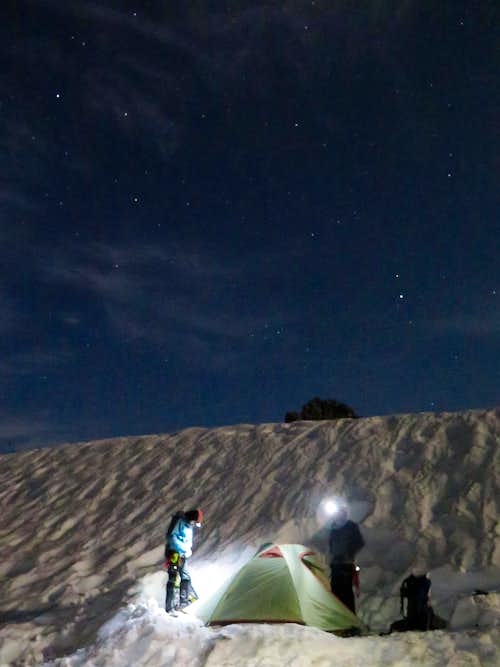 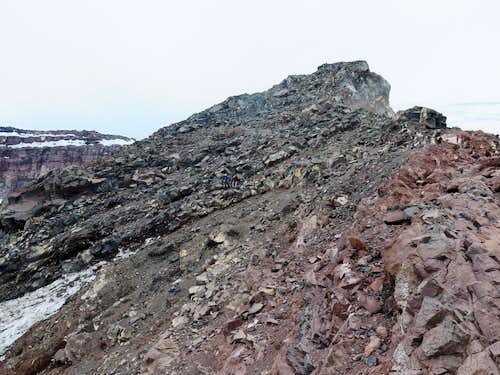 Disappointment Cleaver on the descent
The snow conditions were pretty good, and there no sketchy areas in terms of snowpack. It almost wasn't "icy enough" and the path was pretty well trodden. We crossed 4 ladder-bridges that the guide services had set up, and those were as shady as jumping over the narrower crevasses (which we had to do 2-3 times). Very close to the crater my friend Chris got pretty intimate with a crevasse, but crisis was averted.

(The story in his words: A large crevasse had opened up that day on the previous boot track. It was a significant jump, and I didn't fully commit and quite make it so I fell backwards. had an intimate look into the abyss for a tantalizing second and then toppled head over heels back onto slope that I had jumped from and arrested with my axe. It turns out that there was a snowbridge over to the right so the rope team behind us followed a new boot path over the bridge that hadn't been wanded yet. But even that snowbridge was about 2 feet thick and 6 feet wide.) 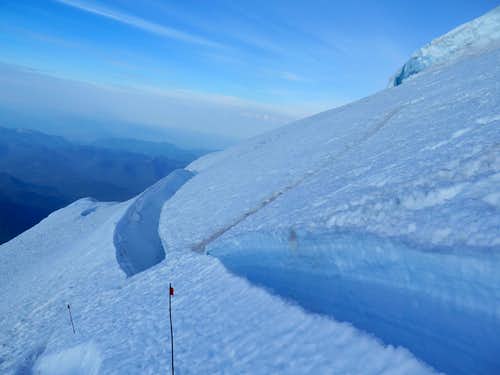 The crevasse that Chris almost fell into

The warm weather meant that there were lots of teams on the path, many following closely but not passing us. Someone from the next team even started walking over one of the ladders while Chris was still on it! The snow softened quite quickly also once the sun came up, which meant that the two big objective hazards of the route (rockfall, icefall) required more attention. We were also told that the route had already been changed a few times this season, because of the quick snow melt and crevasses becoming exposed. In many places we saw diverging wand paths and had to think twice before choosing one or the other. 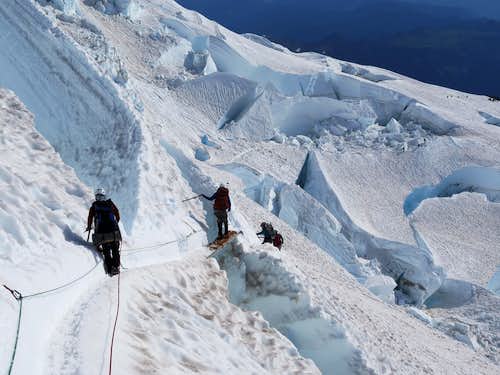 Bridge set up by the guide services

Overall, things were kinda falling apart and we did see rockfall on the ascent and a very recently fallen serac right on the trail, on the way back. It took us 6.5 hours to get to the summit, and the weather was pretty good (starry night, moon was huge and bright, no strong winds, no thunderstorms). 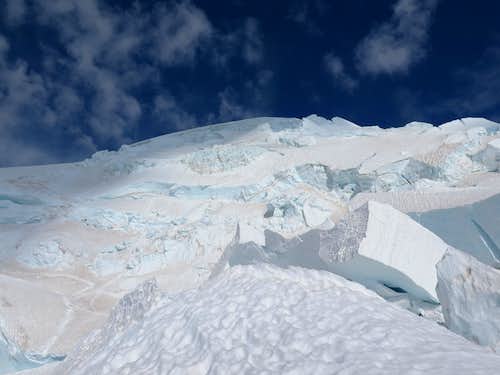 Seracs above the Disappointment Cleaver

Getting to the crater we were surprised by how flat it was for a volcanic crater. Chris did some research later and found out that there is a bunch of stuff under the snow, including an airplane(!) More here: http://www.npca.org/news/magazine/all-issues/2015/winter/under-the-ice-above-the.html 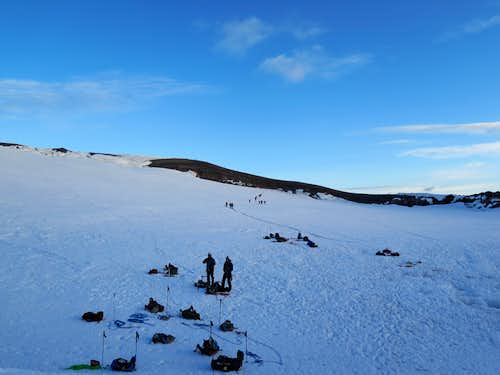 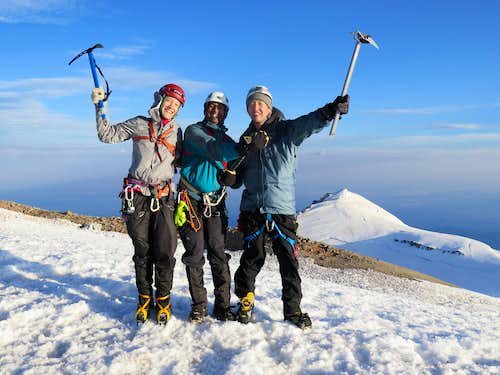 We left the summit at 7am and the descent was pretty slow (I think it took us around 5 hours), as there were many groups ahead of us, creating bottlenecks at the crevasse crossings (we heard the guides were also repairing one of the ladders, so that caused everyone to stop and wait for a while as well). The wind picked up a little bit and by the time we got back to Camp Muir it was cloudy and a bit ominous. We relaxed at the camp, had some food, and headed out around 2:30. On the way back the snow was very dirty and soft (with icy patches) from a busy weekend, and midway it started drizzling a little bit. We got back to the cars around 5:30 and celebrated our successful climb at Wild Berry. 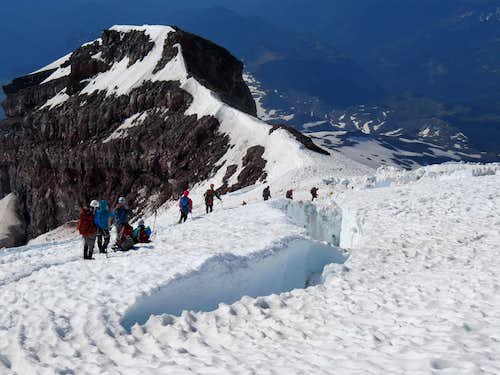 Soft snow and bottlenecks on the way down

taniagrotter, Great job. I did not see this before I came out but my son and I also did DC but a little later after an attempt on Fuhrer Finger route (Lower Nisqually was too broken up to reach from Paradise). We summited on 8/1 and DC route was rough !!!!! It was solid on the way up and very soft on the way down. But only 2 ladders.