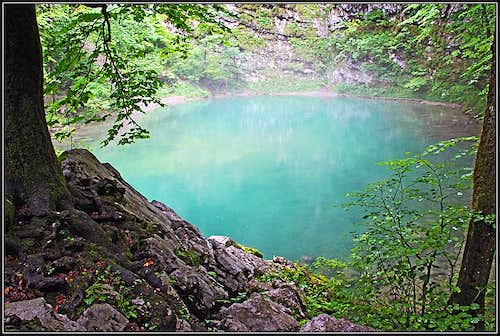 Divje jezero
Divje jezero (Wild Lake) is a small lake, actually a karst water source of Vaucluse type, near Idrija. It measures 65 meters by 40 meters and is 15 meters deep to the syphon.

It gets water out of a deep syphon which has still not been explored to the end. When the preasure of water is high, on the lake surface a water cone is formed, but normally the lake lies peacefully. In a dry season the inflow of water might even get to zero.

The river, flowing out of it, is named Jezernica and is the shortest one in Slovenia. Already after 55 meters it inflows into Idrijca river. There are rare occasions, when after a heavy rain the river Idrijca gets much higher, and because Divje jezero is filled by its own source with a delay, the water from Idrijca river rushes in the opposite direction of the usual one - into the lake.

The whole area has been protected as a natural reserve since 1967. Besides a few special plant species around the lake, the cave with its water hosts also proteus anguinus, the only representative of vertebratae, living in Europe underground in caves. It is blind and because of receiving no day light has a pale pink colour, similar to human skin colour. That's why in our language it is named "človeška ribica" - a human fish.

Until today (2009) the syphon has been explored by Slovenian and foreign divers till the depth of 160 meters (462 meters of length). This point was reached in 2001 by L. Casati. Because exploring it is dangerous there were also a few casualties among researcers.