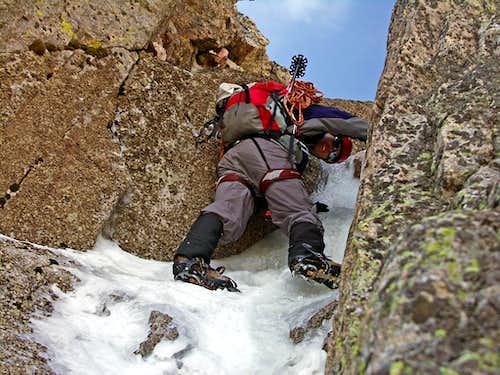 I took over ownership of this page from Miztflip. Thanks!! Dreamweaver is without doubt, one of the best moderate, mixed climbs within the Longs Peak cirque and even in all Colorado. The climbing season varies of course with the amount of snow that fell the previous winter, but generally, expect a short season spanning late spring/early summer.

The approach may be longer than what most are willing to endure (about 4.5 OW) but the setting is unbelieveable. Exposure surprisingly is not that bad (considering the pitch) and route-finding is very straight-forward.

Start at the Longs Peak trailhead located about 8.7 miles south of Estes Park. Technically, this is part of Rocky Mountain National Park but it is annexed. So all the NPS rules/regulations apply but there is no $20.00 entrance fee. Follow the standard trail to Chasm Junction for roughly four miles. Stay left. Take the left spur towards Chasm Lake.

At the lower meadows, pass the small cliff (right) and continue hiking/scrambling due south towards Mt. Meeker's impressive and massive north face. Dreamweaver is partially hidden by the 'Flying Buttress' but it is the apparent line running straight up the north face basically to the summit...a directissma. The snow cone at the bottom is about 600' and is good, moderate snow. If this is melted out, the talus-hopping is miserable. Break the rope out, gear up and climb on!

The snow cone (lower) is about 550'-600' on gradually steepening snow. At the base of the climb (top of snow cone), I believe the pitch is around 35°-36°. There is no need to set an anchor for the belayer. Fact, if conditions are thick, Dreamweaver can be soloed for the proficient mixed climber.

P1: Climb straight up a thin ribbon of ice/neve. The route is narrow but in early season, it will hold snow. Late season, expect brittle ice and rock. The pitch averages about 56°. The crux is encountered about half-way up just past a constricted segment with average rock pro on both sides or stubbys directly underneath. Climb the ice crux (small near-vertical headwall) which is roughly 15'-20' or so. There is a small area climber's right in which to anchor and bring up the remainder of your party.

The route will stay narrow initially but eventually will open up and decrease in pitch to easier terrain. The pitch drops to about 35°-37°. There is a great flat area that will accommodate a few people located at the top of the Flying Buttress. The views of Longs Peak are amazing. If bad weather prevents further climbing, it is possible to repel the other side in two raps followed by initial steep snow.

P2: Some people think the crux of this route lies near the center of the second pitch. And in warm conditions, it probably is. Rope back up and continue climbing the [very] narrow couloir. The line will narrow considerably between two massive granite walls. There is a small chockstone half-way up that forms ice bulges frequently that will prevent easy passage. However, the line is so narrow at this point, stemming is easy.

Past this, the couloir opens up dramatically with easier climbing on slab granite. There is one more quick move to make to clear a small alcove (only one move) before the summit is in sight. Climb another 20' on slabs, use a ledge climber's left to anchor and bring everyone up.
Descend via the Loft Route.