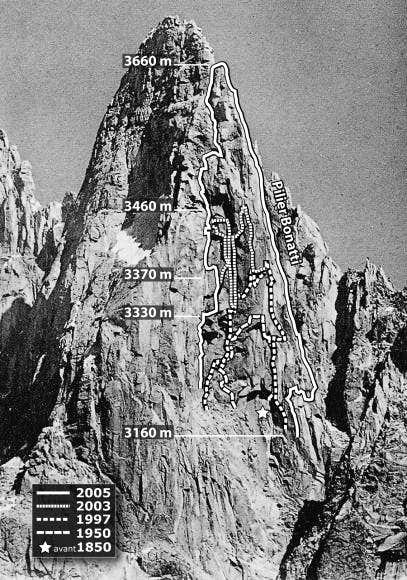 showing the repeated rockfalls on the Dru...
If i don't mistake,other ones had occurred more recently along the Pilier Bonatti, destroying a great masterpiece...
cheers
silvia mazzani

Recent rockfalls on the Drus

For your pleasure, Silvia, I have added a photo in my article of the Drus 1966 rescue I took of the Rock fall which occured the 11th of September 2011 (see the caption of my photo), estimated at 13000 m3 (a mere 5% of the huge 2005 rock fall which totally destroyed the Bonatti pillar estimlated at 265000 m3) with apparently another smaller one which occured the previous day. I saw some huge pieces falling from above the top of the Bonatti pillar. It was followed by a much bigger one on the 30th of October 2011, estimated at 60000 m3 and this time some part of the American Direct route was hit. Although it is in French, you can see more of it activating the links I put in my article (TVMountain). The role of the degradation of the Permafrost due to the global warming is the main explanation for it given by the experts. This is of course not good news and not just for the Drus! The best is to climb on the South and East faces far less sensitive to the Permafrost evolution.
Cheers