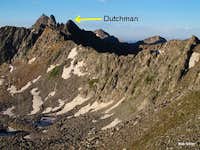 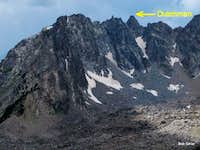 A named peak between Hilgard Peak and Echo Peak, Dutchman Peak features a scramble to a summit that very few seem to climb.

Climb it alone from a base camp or climb it with Hilgard and/or Echo. Be aware that the traverse from Dutchman to Hilgard will almost certainly put you onto exposed Class 5 terrain unless you descend into the basin on the east side of the peaks, and that would add a lot of time and elevation gain to your day. Careful route-finding will keep you on Class 3 and 4 terrain, but there's little wiggle room and you still get the exposure. Eventually, I will have a route page up to describe the traverse.

But the views are spectacular, especially those of Hilgard and Echo, both of which are among the highest peaks in the Madison Range. Hilgard, in fact, is highest and is one of the most spectacular. Echo is third-highest and one of the prettiest. The summit views also include spectacular unnamed tarns and terrain on the west side that sees very few human visitors. 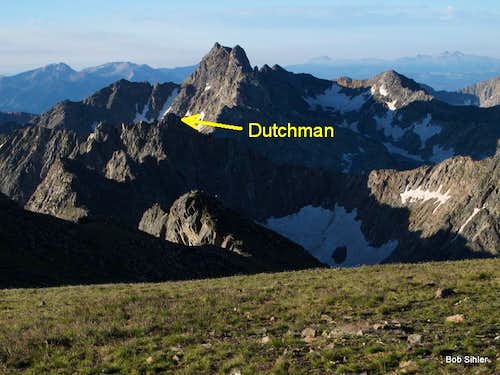 You will want to use one of two trailheads, both located off the same road.

Between Earthquake Lake and Hebgen Lake, turn off U.S. 287 onto signed Beaver Creek Road (FR 985). Drive about 3 miles to a trailhead and parking area on the left. This is the most-used starting point for those setting out for Hilgard Peak.

A mile past this point is the road's end at Potamogeton Park. Two trails depart this spot. Use the first, more southerly one, not the one over by the pit toilet. The trail you want is the Sentinel Creek Trail, and it accesses Expedition Pass and Hilgard Basin, the latter of which is a highly scenic backpacking and fishing destination.

In Select Peaks of Greater Yellowstone, Thomas Turiano mentions using the northeast slopes to climb Dutchman. That may be the easiest way but is not the way I climbed or descended (I traversed from Echo and from Dutchman to Hilgard), but I will treat that as the standard approach and describe two approaches to the northeast slopes.


This is from the first trailhead described in the previous section. Since I did not use this way at all, I am paraphrasing from Turiano's book.

After four miles on Beaver Creek Trail, look for a junction and head right to Avalanche Lake, which is six miles from the trailhead. Then head off-trail for the ridgeline to the north and use talus ramps to access the lowest point of the crest, 1300 vertical feet above Avalanche Lake. Descend into the basin below, losing 400', pass Lake Eglise, and ascend northwest to a bench where a pretty, unnamed lake sits directly below Hilgard Peak. This is at about 10,500' and makes a great camping spot.

Now climb north on talus for 400 vertical feet to a notch just east of Hilgard and its steep east ridge (that east ridge is the Class 4 standard route up Hilgard).

From here until the northeast slopes of Dutchman, I know exactly what I'm talking about since I used this as my return route from Hilgard. 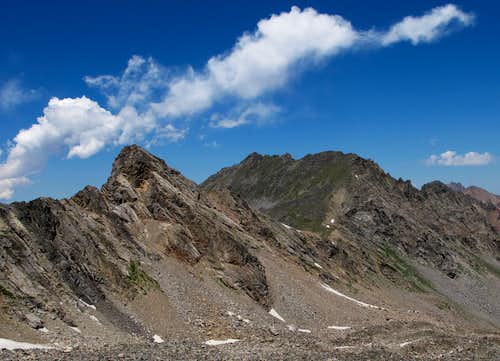 You can descend directly from the notch via a steep couloir. In late July, I found it entirely filled with snow. Although I had an axe, I did not have crampons and felt it was too steep to glissade or to try walking down without crampons, so I wandered east a bit to some couloirs I had seen earlier and which looked less steep and had less snow in them. I used one of those couloirs to descend into the basin.

The map below shows the peak and the basin below it. The upper "arrow route" is not recommended; it is the way to Hilgard Basin and is included for use on a route page detailing the way between Hilgard Basin and Hilgard Peak. Instead, I would recommend accessing the northeast slopes from somewhere west of Tallus Lake. 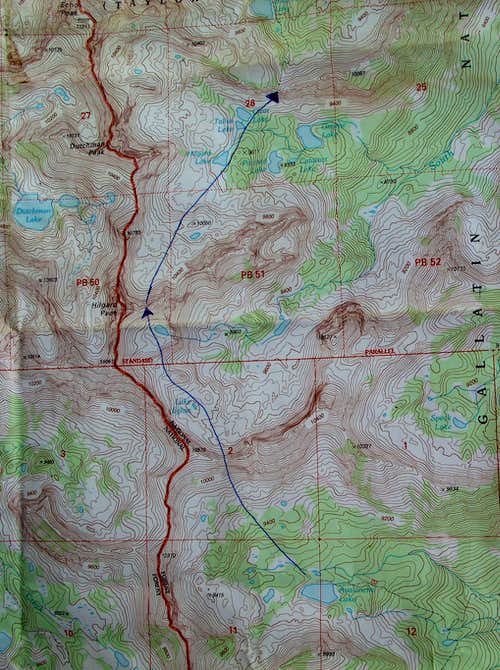 The upper basin is a boulder field and can be slow going, but there are no major obstacles. Head north across the basin to Hilgard Lake and then continue north until you can access the northeast slopes of Dutchman. Turiano is probably referring to the slopes that lead to the ridge just north of the peak, not the northeastern slopes leading directly to the summit (they look too steep on maps and in person), but that is pure speculation on my part since, as already stated, I climbed and descended different ways. I would expect some Class 3 terrain here, and I know that the summit itself is Class 3 with some borderline Class 4 and exposure.

(Side trip: In the basin and just south of Point 10,050T, there is a small unnamed lake with a striking blue color reminiscent of the kinds of glacier-fed lakes found farther north in Glacier National Park and the Canadian Rockies. No glaciers exist in this basin anymore, but a permanent snowfield does feed the lake directly, and there must be enough glacier-like action there to give the lake its color. No other lake in the basin or the area looks anything like it. It's worth a look.) 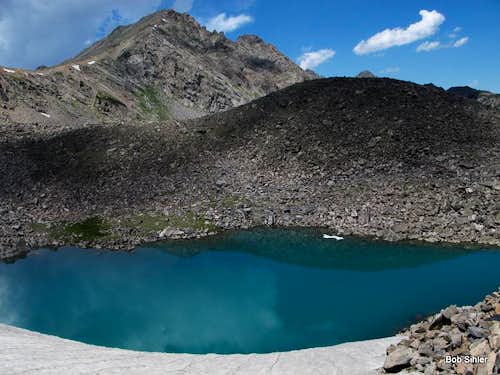 In all, it is about 12 miles to the summit this way, with a total elevation gain of over 5500'. Note that you will incur almost 2000' of elevation gain on the return journey if you go this way.

Honestly, unless you are only interested in climbing Dutchman and Hilgard, using this route does not make much sense.

This is the better route if you want to climb only Dutchman, both Echo and Dutchman, or Echo, Dutchman, and Hilgard from a base camp in Hilgard Basin.

From the divide above Hilgard Basin, descend and then pick a campsite depending upon your plans and how far you feel like hiking. Ultimately, you will lose about 400' before you start climbing again.

Follow the trail until it ends at a brushy clifftop at 9800'. This is the end of the trail through Hilgard Basin.

The former entails less elevation gain, but I cannot vouch for the conditions. The latter partially overlapped my return route from Hilgard, so I know it works.

This would be the shortest route in mileage and would have the least amount of elevation gain, and it would start at the Sentinel Creek TH. However, Turiano notes that a trail through this canyon was abandoned in the 1950's and that the terrain is densely forested and swampy. Doesn't sound too fun.

Approaching via the north ridge from Echo Peak, I found that the terrain steepened to Class 5 conditions, so I passed below the summit on the west side and wound up at a notch above an east-facing gully just south of the summit block. From there, I descended a short distance and then was able to access the eastern face of the summit. Class 3/4 scrambling got me to the top. 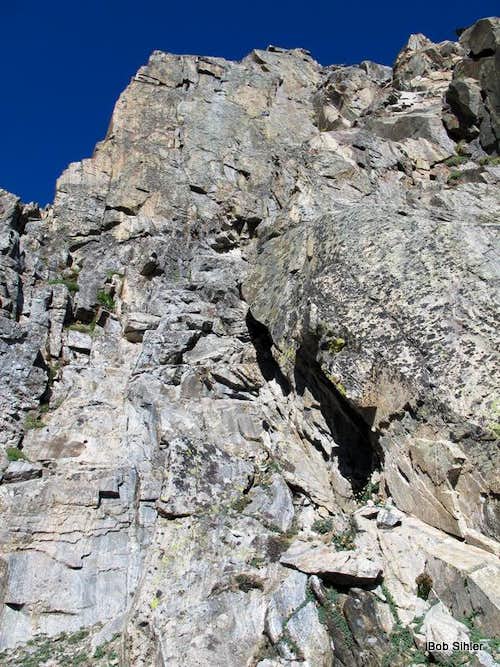 If you traverse from Hilgard without dropping into the basin, you will end up at this notch, and I suspect that the approach via the northeast slopes follows the same workaround to the notch that I used.

This peak is best climbed in summer and early fall, though many ski ascents and descents in this area have been made.

You can camp almost anywhere except right next to a stream or a lake. Please use existing sites instead of creating new ones; it is a fragile area.

No official red tape beyond the wilderness regulations posted at the trailheads. Do note that the Madisons have healthy grizzly populations and that you should carry bear spray.