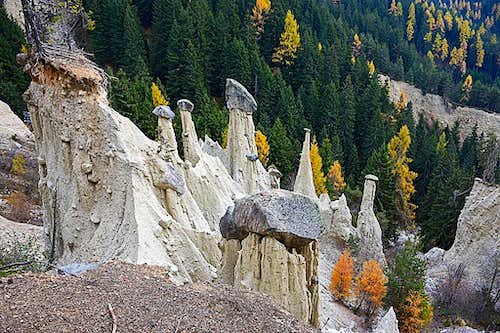 The pyramids in autumn splendor

Near the hamlet of Platten, and above Percha/Perca village and not far away from Brunico/Bru­neck, we can easily reach a group of earth pyramids (hoodoos), which can rival in beauty many other, more famous groups of these natural phaenomena. In the recent years they became a quite popular goal of outing.

The material for pyramids was layered on the slopes during the last big glacial age. But the formation of pyramids is much more recent. Actually it's still happening. The records are saying that in 1834 heavy rains were triggering big landslides in the area. It was then, when the rocky ravine of Terner Bach was deepened. Since then the erosion is working quickly. Slim towers are being formed. They persist until the big boulder from a harder material succeeds to balance on the top, protecting the tower from the rain. Then towers collapse, but from the slopes also new ones are being created.

From the main road we deter at Percha/Percia and drive less than 6 km up into Oberwielenbach and beyond it a bit more to the big parking place. That road continues to the hamlet of Platten, but before reaching it, another narrow mountain road deters left, heading towards the Gönner Alm (alpine pasture). On the crossroads there's the inscription that this mountain road leads also towards the pyramids, but it is closed for public traffic (2017). So, it's best to start the walk up to the pyramids before, on the big parking place, 1430 m, or eventually later, from Platten.

Hiking to the pyramids