Considered the must-do moderate in Central Vedauwoo and overall one of the best climbs in the entire area, Edward's Crack, so salivatingly visible even from far away, screams out to anyone who likes crack climbing and can't resist beautiful, obvious lines to high places. Stay away if your hands, arms, and feet are too delicate and pretty for the blood-drawing jamming this route may entail, especially if you lead it.
It's a great route, with a very physical start (the real crux, in my opinion) and then the traditional crux at the end. That part is physical as well, and slightly technical, but once you find the "magic" hold, it's over.

From I-80 between Laramie and Cheyenne, leave the highway at Exit 329, marked for Vedauwoo. This is about 16 miles from Laramie. Take Vedauwoo Road east and drive 1.2 miles before turning left onto a well-signed road for the Vedauwoo Recreation Area. Stop at the self-pay station and then proceed. Signs point you to the campground, picnic areas, and trailheads. Park at either the West Turtle Rock TH or the Box Canyon one. The former provides a shorter approach, though the route-finding may be a little trickier. Either way, the approach is around 15 minutes.
Vedauwoo Road is usually clear of snow by May and sometimes as early as April.
From the TH you choose, scrambling and use trails will get you to the base of the climb. The route is easy to locate from the road and easy to find. 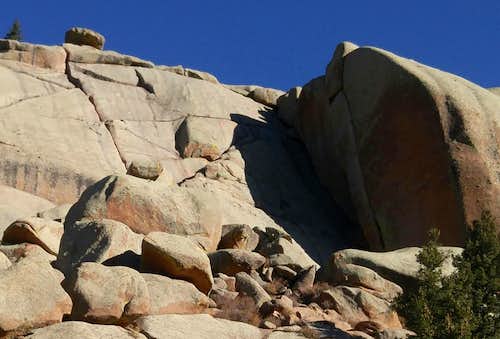 A friend and fellow climber I respect a great deal told me that back in the day, this was a 5.5. Nowadays, despite the 5.7- rating, what you read is that it is mostly 5.5 except for the start and the finish. I'll agree with the 5.7 on the finish; once you figure out the key holds and moves, it's not as tough as it looks. The start, though, is harder, in my opinion; after grunting my way up it, I took a quick rest before moving on. Now that I have led the route, I will say that the start may feel more like 5.8 unless you know the route, and that the end, though 5.7, is not the crux. The crux is getting a good piece in along the start of P1.
Traditionally, this is a two-pitch climb. I've read that it can be done in one pitch with a 60m rope if you belay from just above the P2 crux. There are no bolts or fixed anchors on this route, so bring enough gear to protect the climb and to build anchors.
P1-- 5.7, 90'. The first 20' will be a grunt. There is an off-width; inside it is another crack that you can use for liebacking and pro placements. My first piece was pretty much a blind cam placement, and then I got in a piece that I could see better and trust more. As you get up more, this section gets easier. Above the crack is a ledge where you can take a well-deserved rest. Then traverse left, with sketchy or no protection, until you can pull up and get into the obvious crack splitting the rest of the face. Belay at a ledge where a large ramp and horizontal crack intersect the vertical crack system. In September 2016, there was a stuck Flex Cam still in good condition, and I used that as one of my three anchor pieces
P2-- 5.7. This is shorter than P1 and is supposedly the pitch that everyone comes to climb. The crux is pulling the roof at the off-width up top. Some say to use a C4 #4 here, but others say that will just get in the way of the move. I agree with the latter, and I placed two smaller cams (I think a #1 and #2 UL Master Cam) below the roof and out of my way. Above the roof, some go all the way to the big tree to belay, but that will put you out of visual contact with your second and maybe out of oral contact as well. It is better to build a gear anchor in the crack system just above the roof.
After the second pitch, a short scramble gets you to the actual top of the formation, where there are awesome views and lots of potholes that may be water-filled.
To descend, many people rap down the Walt's Wall Route, which has anchors to skier's left (three pitches with bolted anchors for all, and each pitch can be rapped on a 50m rope), but that can get crowded on busy days. Other options are using the Fourth of July anchor off to the left as you face out from the end of the WWR, anchors on Coke Bottle routes, or hiking down the NE side of the formation, which deposits one in Box Canyon. Thus, the walk-off is not a great option for anyone parking at West Turtle Rock TH, though it's not exactly going to turn the day into an epic.
If you do rap down WWR, two 60m ropes will get you down in one go.

I led this racked with a set of Metolius Ultralight Master Cams, a Demon Cam between the #3 and #4 C4 in size, a #4 C4, a set of DMM Wallnuts, and some medium-size Camp hexes. This was plenty of gear for protection and anchors. I had some Tricams as well but never used any of them.