Blackwater Falls State Park is one of the nicest state parks in the East and has a truly spectacular waterfall (the park's namesake). Below Blackwater Falls, the Blackwater River begins a violent run (lots of Class V whitewater for you adrenaline-seeking paddlers) through Blackwater Canyon, a deep, narrow canyon that, at 1000' at its deepest, is also one of the wildest and most rugged canyons in the East.

In the state park itself, where the canyon gets to about 500' in depth, there are no maintained trails down into the bottom of the gorge, but travel to the bottom, though not recommended by park staff, is allowed, and there are at least three ways down that are something in between a hike and an Amazon-style bushwhack: from Pendleton Point, via Pendleton Creek, and via Elalaka Creek.

But it is worth it. Why? Solitude and scenery. From overlooks on the north rim of the canyon, windshield tourists can see the tumbling tumult of Elakala Creek, which from that side looks almost like one continuous waterfall, especially when water levels are high. In reality, there are four distinct waterfalls and several other cascades. A couple of these are exceptionally beautiful. Almost no one sees those waterfalls up close, and almost no one stands at the bottom of Blackwater Canyon inside the park. 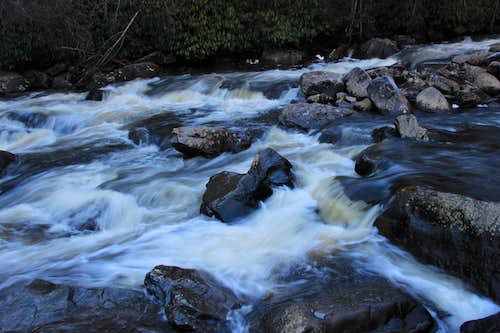 After driving into the park on SR 32 from the small town of Davis, following signs and make a left to head toward Blackwater Lodge. (You'll know you took the right road if you almost immediately make a bridged crossing of the Blackwater River.) Park at the lodge, getting a spot as far to the left (west) as possible. Look for a sign marking the Elakala Trail.

In short order, the trail descends to a bridge spanning Elakala Creek. At this point, you are directly above the only named waterfall in the drainage, the Falls of Elakala. Most people probably content themselves to look down upon the falls from here. Cross the bridge and find a use trail leading down into the drainage. Using the path, you can easily get to the base of the Falls of Elakala. After that, just about nothing on this route is easy.

A decent use trail, though not as good as the one leading to the Falls of Elakala, now descends past a small waterfall and to the top of a larger, much prettier one. From that point on, the route is mostly a matter of finding the way of least resistance. Sometimes "passages" appear, but they quickly peter out. Expect to negotiate rocks, deadfall, and thick undergrowth. Expect to use the brush for holds and sometimes to climb the brush or deadfall itself. Few pass this way, and the land quickly reclaims any paths they might make. You are going to get dirty, you are going to get slapped in the face by branches and brush, and you quite possibly will give some blood.

When you finally reach the river, you will be almost directly across from (though far beneath) Pendleton Point, which often is visible on the way down. If you left a car up there with thoughts of crossing the river and heading back up that way, you probably will find yourself reconsidering. As noted before, the Blackwater River is serious, dangerous whitewater even for experienced kayakers, and crossing it is likely to be perilous in all but the very driest of conditions, and West Virginia isn't too dry.

Going by the Bushwhacking Grades shared by Vancouver Islander, I put this route at B3 and even B4 at times.

One-way distance is between 0.3 and 0.4 mi. Elevation loss is about 450'. After leaving the trail, the route is very steep most of the way.

Standard hiking gear. Don't wear anything you wouldn't be able to stand seeing torn or punctured.

Trekking poles or a stout walking stick will help with the pace and the footing on the way down.