Blackwater Falls State Park is one of the nicest state parks in the East and has a truly spectacular waterfall (the park's namesake). Below Blackwater Falls, the Blackwater River begins a violent run (lots of Class V whitewater for you adrenaline-seeking paddlers) through Blackwater Canyon, a deep, narrow canyon that, at 1000' at its deepest, is also one of the most rugged and wildest canyons in the East.

In the state park itself, where the canyon gets to about 500' in depth, there are no maintained trails down into the bottom of the gorge, but travel to the bottom, though not recommended by park staff, is allowed, and there are at least three ways down that are something in between a hike and an Amazon-style bushwhack: from Pendleton Point, via Pendleton Creek, and via Elalaka Creek.

The way down via Pendleton Creek is the gentlest of the three, and it is considerably easier going than the way via Elakala Creek. (I cannot compare it to the way down from nearby Pendleton Point because I have never gone that way). Still, it is steep and not for those who prefer well-maintained trails.

A bonus of this route is that it passes three significant waterfalls and several minor cascades. The first is the Falls of Pendleton, marked on park maps and easily accessible by a use trail. Relatively few park visitors ever see this waterfall except from overlooks on the south rim of the canyon; fewer yet go below it. The third and final waterfall dumps directly into Blackwater River.

After driving into the park on SR 32 from the small town of Davis, follow signs to Pendleton Lake, a man-made lake popular with boaters and fishers, or to Pendleton Point, and hike over the dammed outlet to pick up the Dobbin House/Pase Point trails.

Just a couple minutes along the trail, start looking for a use trail descending to the creek. This will ultimately get you to the base of the Falls of Pendleton. Now look for paths and/or narrow "tunnels" through the rhododendron. For most of the way, the route is evident and is easy to follow despite often being steep, loose, and exposed. The bushwhacking is fairly minor, though I should note that I went in the winter; late spring through early fall, there will be more undergrowth and foliage. 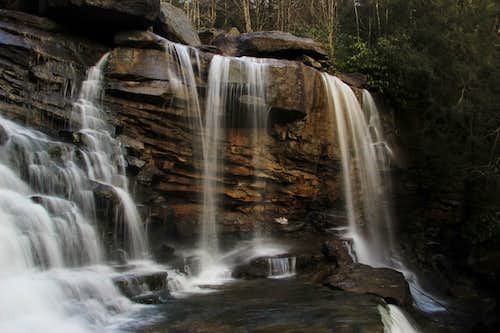 I would call this a Class 2 route, maybe with some 2+ or 3 in spots. However, expect conditions to be damp, with lots of slick, mossy rocks.

Distance is about half a mile with around 400' of elevation loss.

Standard hiking gear. Trekking poles or a stout walking stick will help with the pace and the footing on the way down.