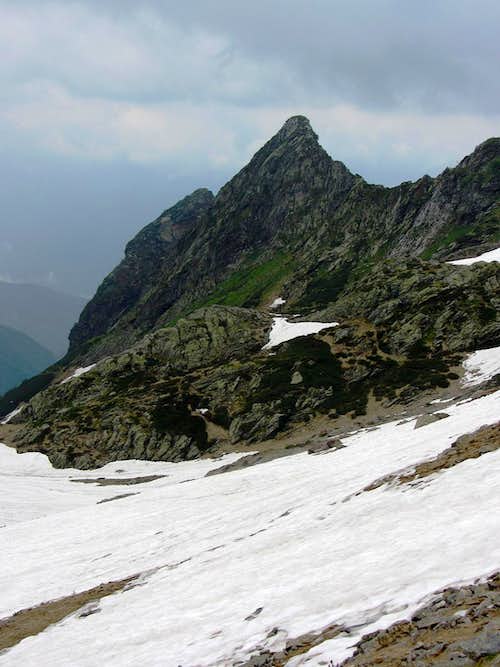 A snow field at the base of Cima Fornaletti (1903m)
The year 2013 was not a typical one in the Alps. Serious amounts of springtime precipitation meant that the snow would persist far longer than usual.

The summer season normally starts in July. In some areas the refuges open my mid June, but by July almost all of them are open, and most of the spring snow is gone. It's not the same everywhere of course; apart from the amount of snowfall earlier in the year, it depends on the elevation and location of the area. Obviously, the snow is gone earlier in lower areas and in more southern ones.

But record snow or not, by mid June I didn't want to wait any longer. It was only a couple of weeks before I had arranged to meet Mark Hallam, to try to climb a handful of 4000-ers. So, searching for favorable conditions, I wanted to go south, but at the same time I didn't want to be too far from Zermatt. And so I settled on the area around Domodossola, in northern Italy, near the Swiss border.

The first part of the trip, I went hiking in and around Valle Loana. This valley is surrounded by a number of easy peaks, the highest of which being Cima della Laurasca. At 2193 m that would make a fine start of the acclimatization process. On one occasion I had to cross a snow field, but it wasn't serious. No crampons or ice axe required.


The green paddle points at the end of the road in Valle Loana.Click here to view a larger map