between Simplon pass and Splugen pass

The name come after the old people of "Leponzi" , an ancient Celtic people living in this area and whose found inscriptions are dated from about 300 BC.

this is a wide range oriented W-E that is the main watershed of Europe, on its northern side the Rhein river basin, on its southern side the Po river basin.
Mountains in this range are not as high as its W neighbours ((Pennine Alps where the ridge is often over the 4000m) nor as its E neighbour (Retiche Alps where the ridge is often over 3600m)
on the other side, this range is normally deep and the distances between N and S main valleys are normally big.

Wide variety of rocks .. starting with the fantastic granite near the St. Gotthard and ending with the crumbly rocks in its eastern part, somewhere, especially in the eastern part some dolomite or limestone banks come out in the main ridge ...

A great variety of climbing difficulties ... extreme climbing on granite, fine alpine climb on most of its summits, a large choice of fine hiking routes, the best range to start mountaneering without big risks.
These summits are sometimes busy, full of Lombardic and Ticinesi climbers or hikers that, starting from home, can climb almost all these summits without having to spend the night in refuge or elsewhere but home ...
... few come from abroad, unknowing what they lose :) 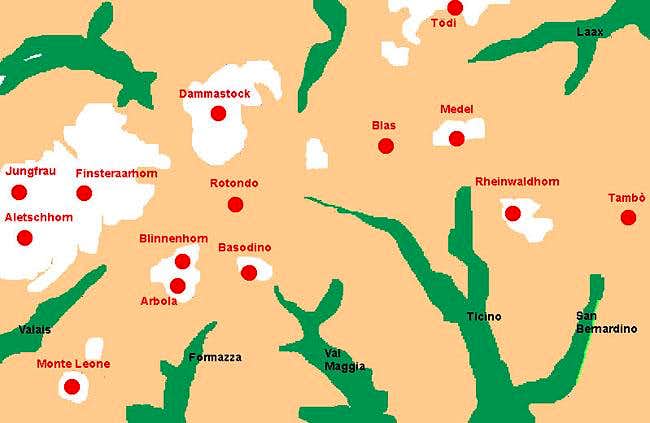 Main valleys and accesses
from Switzerland (W side) : the Rhon valley

Few km North of this group another fine one, the Blinnenhorn with its fine (few summits)


Main valleys and accesses
from Switzerland (W side) : the Rhon valley

from P.so S.Giacomo, toward East, a secondary, but important, ridge that divides Italy (S) from Switzerland (N) and is surrounded, first on its N side, then on its SE side by the Ticino river :
the Basodino and Ticino group with some remarkable summits Main valleys and accesses
from Italy (W side)

East of S.Gottardo and till the Lucomagno Pass we have the northern border of Ticino river and, in background, toward north a small ridge of little importance delimited by the valley descending from Oberalp pass toward west (Andermatt) and East (Disentis), on this ridge some minor but fine summits ... the Pizzo Centrale (Rotstock (3001m), the Badus (2928m). the Piz Blas (3018m) and the Piz Gannaretsch (3039m) - this range is also known as Blas group

East of Passo di Lucomagno the ridge rises with the