In August2014 an expedition composed of mountaineers from Austria and Pakistan explored the Ghujerab Mountains in the Karakorum Mountain Range close to the Pakistan /China border. In addition to a north-south traverse over the rarely crossed Chafchingolpass ending up close to the Khunjrab-Pass we looked forward to reach the top ofthe till then unclimbed and unnamed peak which dominates the Ghidims Dur(valley) including the camp site of Yahya camp.

Startingfrom the village Shimshal at the end of an extraordinary jeep road in the heartof the Karakorum, we moved in 3 days over Boesan Pass to the base camp in the Ghidims valley.  After exploring possibleroutes and approaches towards the summit we decided to climb up into the glaciated high valley north of Dosti Sar (first climbed in 2013). On the way up four stone men mark an old trekking route over the rarely crossed northern Ghidims Pass. At 5250m we prepared our high camp with two tents and started a short exploration of possible route options to the top.

It was the morning of 23rd August 2014 when we started early for the ascent to the summit. Fortunately, the weather seemed to remain one more day pleasant and we soon reached the beginning of the steep, glaciated slopes leading to the summit.  Due to heavy snowfall a few days before nearly all crevasses were covered with snow so it was spiteful to find a way through the steep labyrinth of snow and ice.  Close to the top it was necessary to use several ice screws to cross a huge ice ridge. But it should have been the most difficult part of the whole ascent because once the barrier was conquered we - Christian Müller (Austria), Stephan Tischler (Austria), Naseer Uddin (Pakistan) and Rahim Hayat (Pakistan) – finally reached the plain summit and were the first humans on this mountain with its incredible panorama. 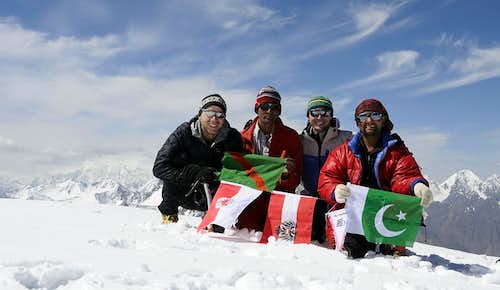 summit of Igls Peak with first climbers Stephan Tischler, Rahim Hayat, Christian Müller and Naseer Uddin (from left to right)
During our ascent two eagles observed our efforts in the ice which soon convinced us that the name of the mountain has to refer to this majestic bird. But there might be several other – if not to say countless - “Eagles Peak” in the world, so we used the similarity in the pronunciation between “Eagles” and “Igls” and decided to name the summit “Igls Peak”. “Igls” is the name of the home village of the two Austrians and correctly pronounced in German language it sounds completely similar to “Eagles”. After several measurements with our GPS devices the altitude could be fixed at 6014m, the coordinates are 36°41'26.64"N, 75°31'58.26"E 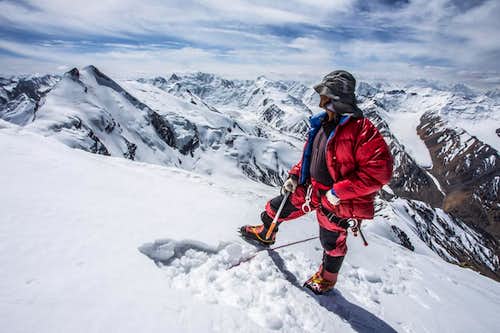 After one hour and many pictures later we started our long descend back to the high camp and continued to the base camp down in Ghidims valley. The weather changed the next day dramatically, covering the whole area with rain and snow. But that could in no way diminish our satisfaction when trekking back the long way to the Karakorum Highway.

A few details would be nice. :)