In August 2014 an expedition composed of mountaineers from Austria and Pakistan explored the Ghujerab Mountains in the Karakorum Mountain Range close to the Pakistan / China border. In addition to a north-south traverse over the rarely crossed Chafchingol pass ending up close to the Khunjrab-Pass we looked forward to reach the top of the till then unclimbed and unnamed peak which dominates the Ghidims Dur (valley) including the camp site of Yahya camp. It was the morning of 23rd August 2014 when Stephan Tischler, Rahim Hayat, Christian Müller and Naseer Uddin reached the top of Igls Peak for the first time ever.

Start in Shimshal village and follow the trek over Boesan Pass to the base camp in the Ghidims valley (2-3 days).

From the base camp follow the Ghidims valley until you reach the base of Igls Peak. Turn to the south and after 1-2 hrs at a stone man climb up to another side valley on the left side. When reaching the glacier stay on the left side. 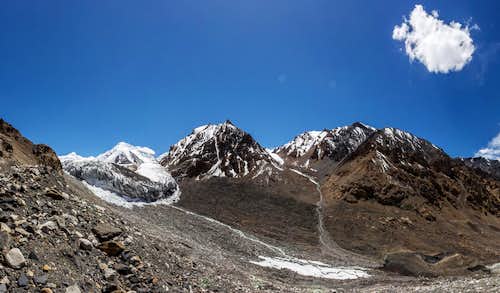 
At 5220m there is a suitable place to build up the high camp. Follow the glacier in the eastern direction and turn sharply to the left where you can for the first time see the summit. Enter the steep glacier and follow it to the top, the last 100meters ice screws can be helpful.

For trekking and climbing in the Ghidims valley a special permit issued by the ministry of tourism is needed. It is no longer necessary to obtain the permit in Islamabad, but you have to show up personally at the authority in Gilgit before you start and after you end the tour for briefing and debriefing.

There is no infrastructure for camping available. Be aware that spring water is limited to a few places.