First Taste of a Summit

Mt. Olympus,
May 30, 2013 -- Evening
Hike / Bushwhack, Hard Class 1
The Vertical: 1450ft.  Ascended to 8,808ft from 7,350ft.
The People: A small, more rugged subset of a Maymester class of University of Colorado Denver students.
The Distance:1.5 Miles
The Duration: About 2 hours, with a very long picnic on the top.
The Wildlife: No sightings

Hello good people of the mountains.  I have a short and sweet trip report for this shapely hill located on the east side of Estes Park.  Why bother with this 8,808 foot peak?  Well, this was my first real summit!  I have been a passionate, advanced alpine skier my entire life, but I have never really climbed on top of a peak from the base.  I mean, I guess I have hauled my skis up to the top of the East Wall at A-Basin, but the chairlifts mitigate almost all of the vertical ascent required.  I have also been camping and hiking for many seasons but was never really compelled to ascend onto the ridgeline.
Finally, after well over 20 years, I tasted the sweet summit air, and immediately my life priorities underwent a bit of a reevaluation.
I write this in the middle of fall, having recently returned from soloing my first 14er.  In one summer season I bagged many peaks and learned many important lessons about mountaineering.  In a few short months I experienced some of the best moments of my still-budding life and made strong connections with new friends.

At the end of May, I was staying in Estes Park for a couple weeks as part of a University of Colorado Denver Maymester class oriented around the wilderness.  We spent our days in Rocky Mountain National Park doing long and arduous but fairly benign hikes and snowshoes to alpine lakes and tarns.  I had never hiked in such a rugged alpine environment, and after getting so close to the the tops of some of the mountains I began to develop an itch to get on top of it all and look over the jagged sea of rocks.
After many days of passing Mt. Olympus on the way to and from Rocky Mountain National Park, I discussed a sunset climb up the slope with the more adventurous classmates.  Not only would it be an extremely simple, quick climb, but the mountain was pretty much in our backyard.  A plan was quickly formulated -- we were to start from Pole Hill (near where we were staying) and hike down into a valley and then up the east side.  We threw some beer and trail mix into our bags and prepared to set out. 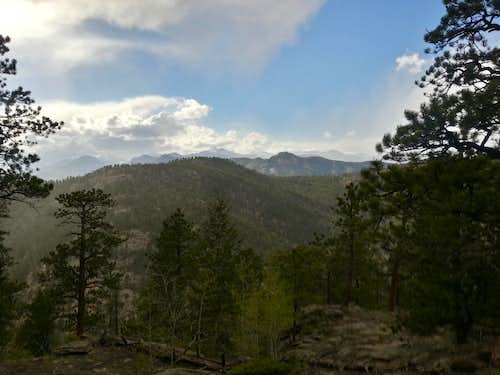 I decided to take one quick look at a topo map before walking straight up the side of the mountain to see if there may be a path or best approach.  The map revealed that the southern half of the mountain, including the summit, was private property belonging to Crocker Ranch.  The valley we intended to across was the main part of the ranch, and we quickly decided to change the route to ensure that angry ranchers with hunting rifles did not turn into swiss cheese.  However, we still planned to spend some quality time on the summit, even if it meant dodging sniper rifle rounds.

After determing the west route was road-accessible and generally within the confines of the national forest, we headed out and reached the trailhead in a few minutes, perhaps around 5:00pm or 6:00pm.  The sun was still hanging high enough in the sky, we were determined to catch a sunset and then haul back down the mountain in a matter of 20 minutes and drive away.  We got on the trail and began to ascend, losing the train in a matter of moments and resorting to bushwhacking.

Bottom of the Top of the World 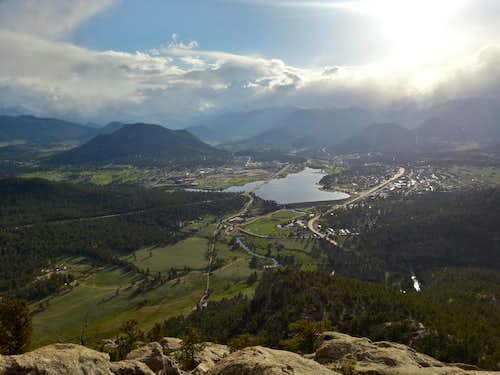 Compare this photograph to the historic Enos Mills photograph from 1909.
We made very quick time and generally travelled as a dispersed group to minimize erosion.  Instead of following a gently-sloped creek to the top, we veered to the left to stay on the large rocks and get the vertical out of the way quickly.  After about 40 minutes, the soaring rocks of the summit were painfully close.
I looked behind me, towards Estes Park and Rocky Mountain National Park.  The great conditions at the start of the hike had already deteriorated.  The Mummy Range was gone, completely hidden by a veil of fast-moving clouds.  I carefully observed the clouds churning over the front range for a couple minutes, determining that they were overall moving north of Estes Park and would bring us nothing more than an interesting addition to the scenery.
After another 30 minutes, we had reached the base of the largest rock spire, determing the best way to get on top.  The formations on the top of the mountain were very interesting and I explored a number of small rock caves, dens, and mini-meadows in the shadows of towering cliffs.  The rock faces of Mt. Olympus were one of the primary features that instilled me to pursue the peak, and they were even more interesting in person.  We opened up a few beers and climbed on to the highest rocks where a stake, USGS marker, and small cairn announced our minor achievement.  I imagined Enos Mills attempting to steady a very large camera on this point. 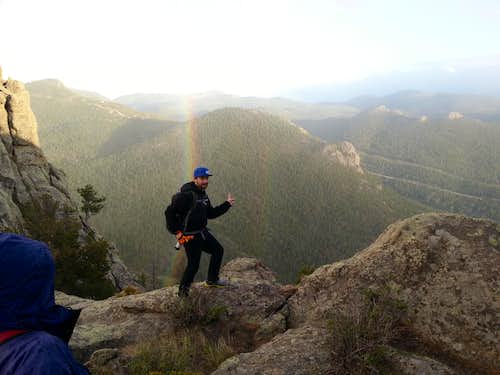 Sometimes the mountains are mean, and sometimes they are really really nice.
After some pictures and craft brews, it was brought to my attention that the storm to the north of us was very rapidly changing direction from moving east to moving south.  In response, the winds began to pick up.  We lingered in the trees near the peak, eager to see what would happen, and hoping we could wait it out to see the sun set.  Snow began to blow sideways but subsided in only a few minutes.  It was only a small band of storm clouds, and soon the sun was burning through the cloud cover.
We returned to the summit to look over the ridge and we were greeted by an almost full-circle double rainbow.
The sudden intensity of the weather changes introduced me to the hazards of mountaintops, but I would not be fully cognizant of that fact until my first ascent of a much larger mountain.  We decided to proceed down anyways and catch a glimpse of the sunset from the side of the hill.

The descent bushwacked down a very easy stream gulch that led right to the parking lot.  Vegetation cover was minimal and there were plenty of large rocks to quickly descend.  The sun sank behind the jagged peaks of RMNP and allowed us to hike under a purplish hue for many minutes.  After only 30 minutes, even stopping for a beer, we had made it back to the car.  Snow was not found anywhere on the hike except in very small patches. 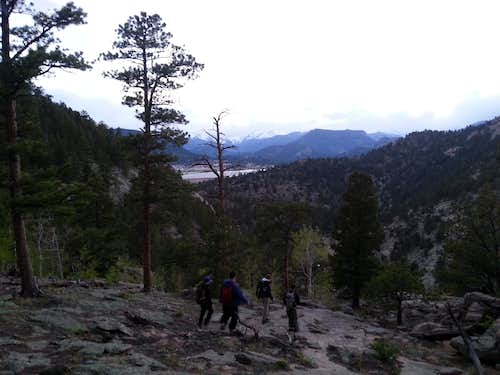 Descending in the purple.

Thanks Marc. I made those changes. Looking forward to posting some reports of more grueling summits. This page provided some good practice (my first summit of SP, if you will).

Is that a rainbow behind you (or just a camera malfunction?)