Flowers on the Sonnenberg

Flowers on the Sonnenberg

Somehow I keep coming back to the Texel Group. I've been there alone and with others, hiking, scrambling and climbing. It's a real varied range, in no small part thanks to the great differences in altitude as well as the layout of the terrain. The elevation ranges over 3000 m, with the nearby city of Meran at around 300 m and many summits over 300 m, including Roteck, the highest, at 3337 m. The contrast in climate is big too, from subtropical Meran, where you can find palm trees along the streets, to the barren alpine slopes high up, and there are still a couple of small areas of permanent ice, serving as reminders that there were some real glaciers here not too long ago.


The green paddle points at Patleid.Click here to view a larger map
On the south side, the Vinschgau valley forms the natural border of the Texel Group. With all the mountains to the north, not just of the Texel Group but many more, bad weather from the north usually drops its rain or snow well before reaching the Vinschgau valley. Especially the south facing area above the village of Naturns (554m), called "Sonnenberg", is pretty dry. It's a mix of forested slopes and man-made meadows and fields. For the record, although "Sonnenberg" roughly translates to "Sun mountain", it's not really a mountain, it's just an area on the slopes above the valley floor that gets a whole lot of sunshine, but there are no summits nearby. 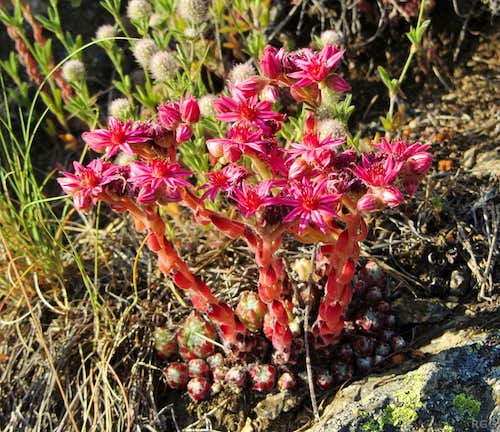 Sempervivum Arachnoideum, a succulent that thrives in areas with low precipitation

A fine place to eat or sleep in the Sonnenberg area is Patleid (1386m). There are several other accommodation options nearby, as well as in the villages in the valley below.

A long, long time ago, well before the advent of tourism, Patleid started as a farm. Life in the mountains was hard in those days, but the area has come a long way since then. Of course the slopes still present a few challenges to farming, but that's not the only source of income anymore. The tourist industry has given a big boost to the local economy. And the surfaced road up to Patleid (in fact it goes a little bit higher) makes it possibe to drive up and get an easy start on exploring the area. Mind you, I didn't do that. I explored the area on foot.

On my latest visit I arrived as I was on my way out of the Texel Group, at the end of a long day. After a huge meal and a good night's sleep, I decided to take it easy and took my time to get down to Naturns. And along the way I photographed lots of flowers, and so I decided to collect them in this album.