Marmolada is the highest mountain of the Dolomites and is often referred to as the Queen of the Dolomites. A variety of routes goes up this mountain with the Westgrat Via Ferrata (Hans Seyffert weg) being one of the most popular ones. There are two main routes to reach the start of this famous Via Ferrata to the summit of Marmolada. The most used one is from Pian dei Fiacconi (2626 meters), since it is easy accessable by using the cable car up from the Fedaia Pass (2054 meters). A longer, but certainly more beautiful alternative is the route through the Contrin valley, which is described on this page.

The first part of the route is easy along a broad path that goes up from Penia to the Rifugio Contrin at 2016 meters. Many hikers take this route up to the Rifugio and hike down again to the valley, which makes for a perfect day outing on easy terrain. After the rifugio the broad path stops and changes into a hiking trail (T2 and later T3). The route goes through the Val Rosalia in the direction of the Forcella Marmolada, the pass that seperates Marmolada from Gran Vernel (3210m). The last part involves a short Via Ferrata and is the most difficult section of the route.

The route starts at the Parking lot of the Cable car in Alba (1527m). Follow the trail into the direction of Val Contrin/ Rifugio Contrin. The route starts in a southern direction with a hiking trail through the dense forest outside of Alba.  After a while, the forest clears and the Contrin valley is reached. The route leads over a broad unpaved road thorugh the scenic Contrin valley. The route follows the Ruf de Contrin, a river flowing through the valley. Keep following the trail until you eventually reach
the Rifugio Contrin at 2016 meters. This part of the route is easy and graded T2- at max. A lot of day-hikers go up from Alba to the Rifugio and back down again. It is possible to spend the night in the Rifugio. See the section below for more information.

From the rifugio Contrin the trail leaves the broad Contrin valley and heads up the Val Rosalia in an eastern direction. The broad unpaved road makes place for a hiking trail and will soon start to gain in elevation. The trail is graded T2 and further on T3 at this point.  The route through the Val Rosalia is quiet and scenic. You have stunning views on the dazzling South Wall of Marmolada at all times. Keep following the trail until you reach a junction. Taking a right will take you to the Passo Ombretta You have to take a left to the Forcella Marmolada. The trail becomes a little more difficult after the junction and shortly before the Forcella, the trail is protected with large wooden logs to prevent slipping. Watch your step here, this last part is graded T3+.

To reach the Forcella, a short Via Ferrata has to be overcome. This section is short but steep and includes a near vertical, steel ladder. After the ladder, the Forcella de Marmolada is reached and the route from Pian dei Fiaconi joins our route at this point. The remaining part of the route to the summit of Marmolada is the actual Westgrat Via Ferrata (or Hans Seyffert Weg). This route is described here on SP. 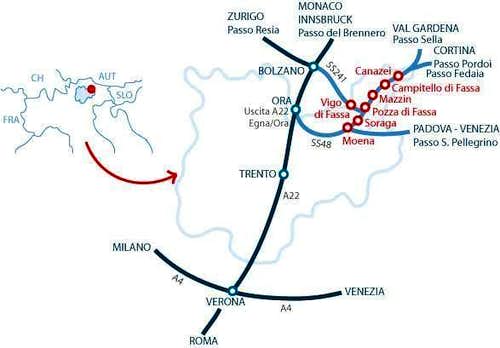 How to get there
Starting point for the route is Alba (1527m), situated in the Val di Fassa. Alba is the village next to the bigger and wellknown village of Canazei. You can reach Alba:
-From ora/Auer (exit Brennero highway) through Predazzo, Moena, Vigo di Fassa, Pozza di Fassa, Campitello di Fassa, Canazei by SS48

-From Cortina d'Ampezzo through Arabba and Passo Pordoi by SR48 (50 km) or through Giau Pass and Selva di Cadore. 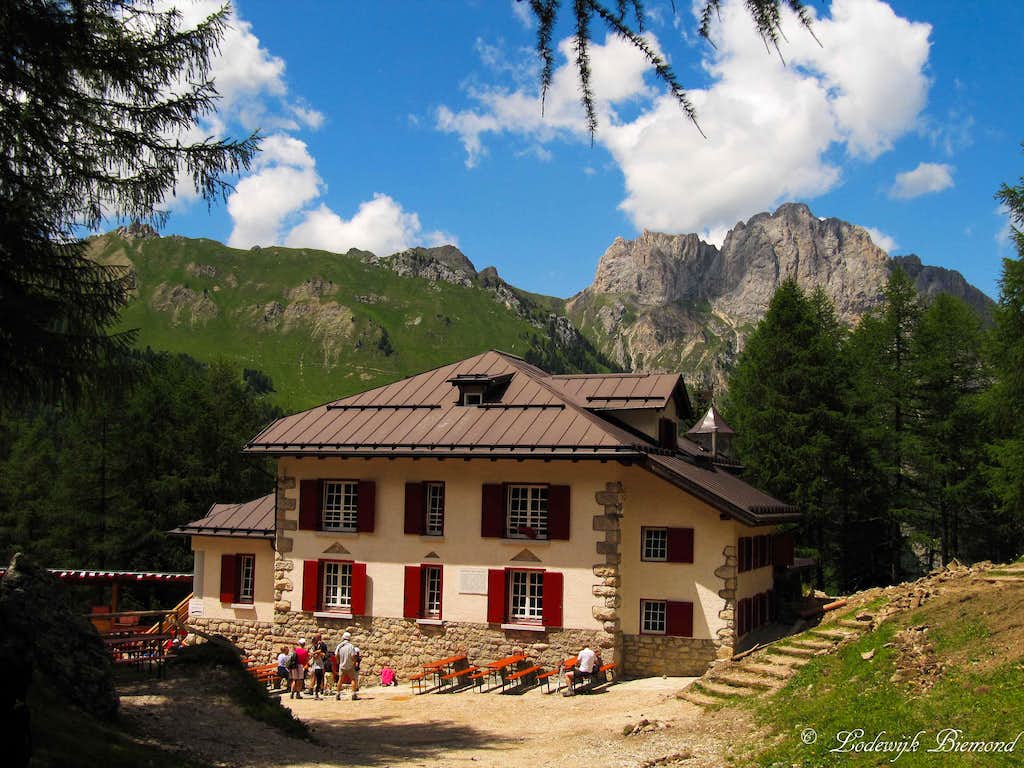 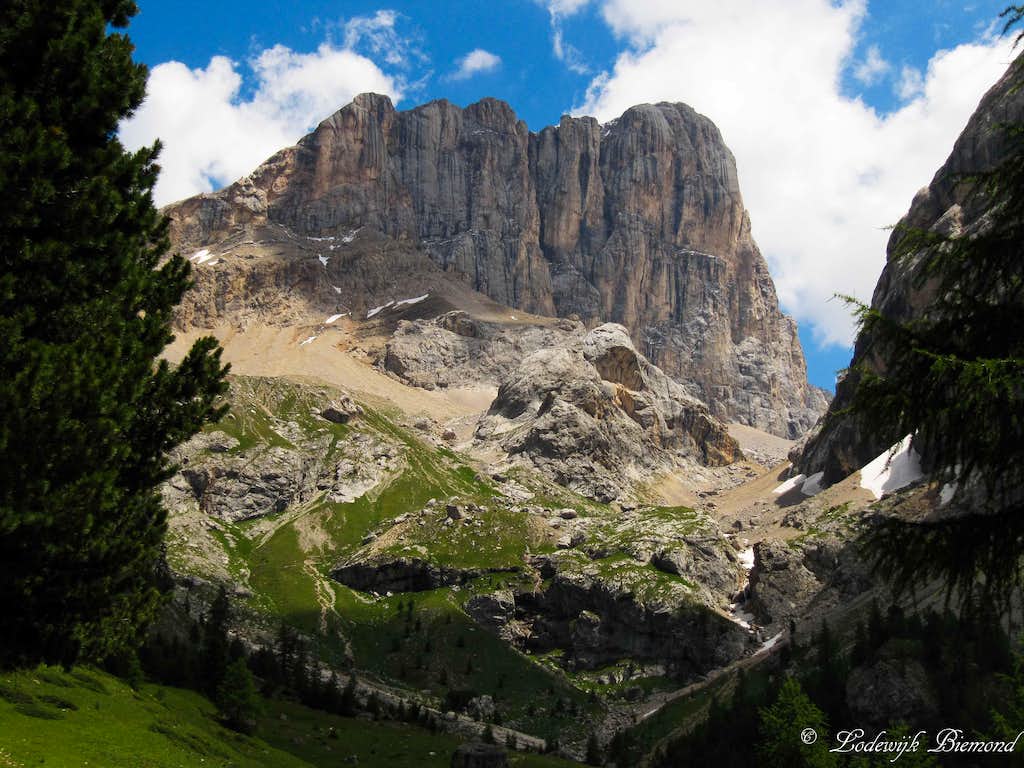 Marmolada South Wall
The route from Alba to the Rifugio Contrin can be climbed from spring until fall. For the route from the Rifugio to the Forcella Marmolada the summer months (june until september) are best. Still, in June there is a possibility that snow is still present on the upper parts of the route. For the Westgrat Ferrata the best months are July, August and september. Still, in July there can be a lot of snow on the Westgrat Ferrata, so check the current condtions if you are planning a trip. 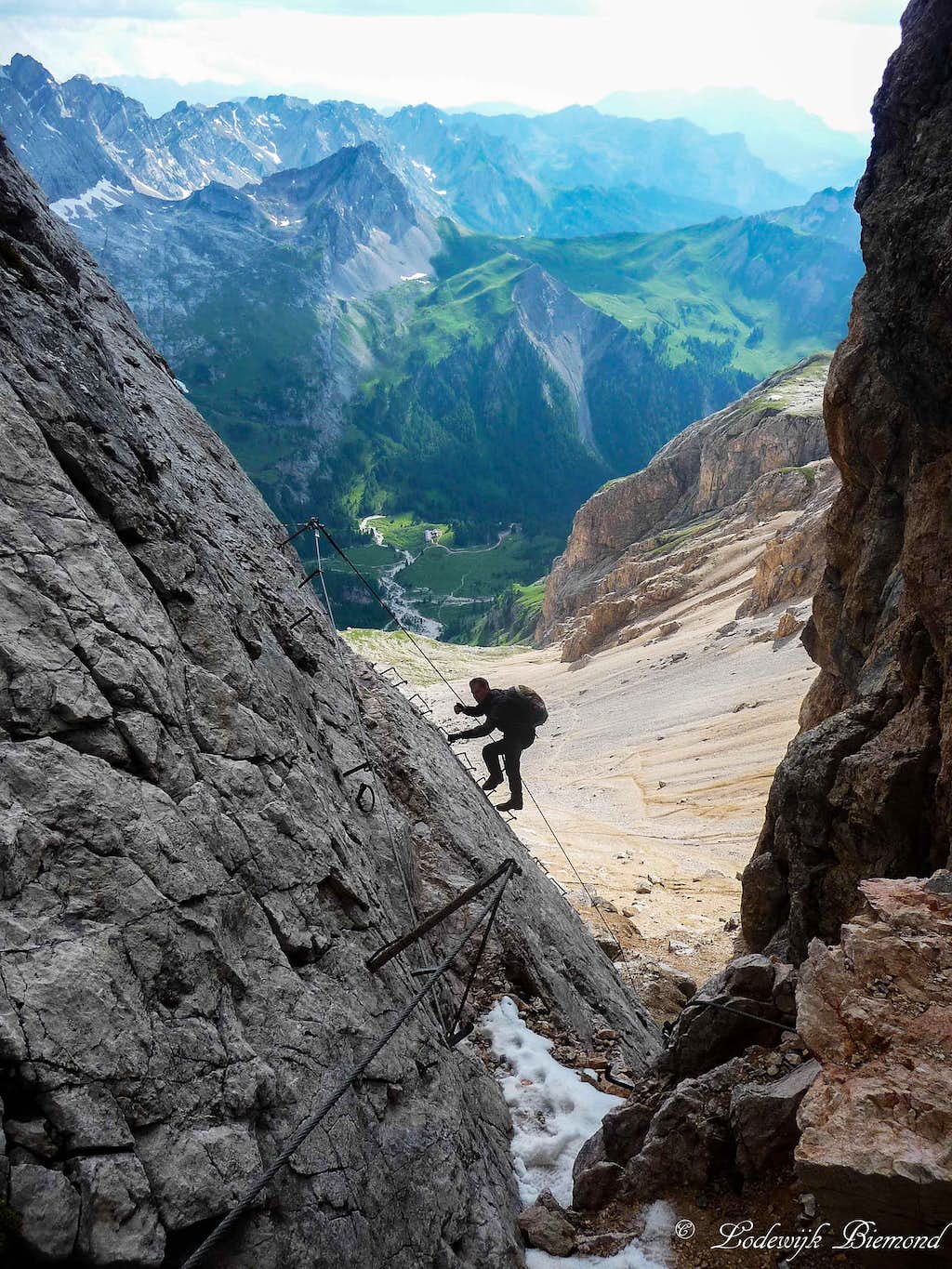 Me climbing the Crux of the Route
For the route from Alba to the Rifugio Contrin good hiking shoes are sufficient. The route between the rifugio and the Forcella Marmolada is  more difficult and goes up to almost 2900 meters. Good hiking shoes are mandatory as well as warm clothing. A Via Ferrata-Set can be useful for the last 100 meters of the route, which includes a short Via Ferrata. If you plan to go on climbing Marmolada punta Penia over the Westgrat Via Ferrata a Ferrata-set is mandatory, as well as warm clothing and full glacial equipment if you plan to descent along the normal route.