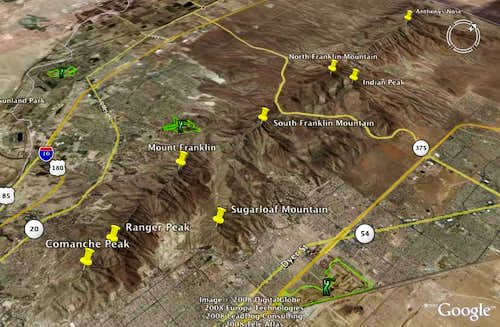 The Franklin Mountains are located primarily in far west Texas but extend into southern New Mexico. The range is approximately 23 miles long and 3 miles wide.

The mountains rise 3,400' above the surrounding city of El Paso. The highest peak is North Franklin Mountain which stands 7,191 feet above sea level.

The continuous north-south ridge line of the Franklin Mountains is separated by Anthonys Gap just north of the New Mexico state line.

The Organ Mountains to the north are separated from the the Franklin Mountains by the 4.5 mile Fillmore Pass.

The Franklin Mountains are named after Benjamin Franklin Coons who, in the 1850's, owned much of the land that is now known as El Paso.

The East and West sides of El Paso are separated by the Franklin Mountains. There are only two main ways to get from one side to the other, I-10 with runs south of the mountain range and Trans-Mountain Road (Loop 375) which runs through the mountains, between North and South Franklin.

The Franklin Mountains were home to the only tin mining, milling, and smelting operation ever in the United States. The operation was active from 1910-1915.

The major, named peaks of the Franklin Mountains from north to south are:

The major canyons of the range from north to south are:

Hitt Canyon (On the east side)

Vinton Canyon (On the west side)

Avispa Canyon (On the west side)

Fusselman Canyon (On the east side)

McKelligon Canyon (On the East Side)

The Franklin Mountains State Park in El Paso, Texas is the largest urban park in the United States. It is comprised of 24,247 acres covering 37 square miles all within the city limits of El Paso.

The Park was created in 1979 by an Act of the Texas State Legislature. In 1981 the park was acquired by the Texas Parks and Wildlife Department and in 1987 it was opened to the public.

There is a fee of $4.00 for persons 13 and over to enter the park. Children 12 and under are free. There is a special group school-sponsored fee of $1.00 per person although you must contact the park to make arrangements. Holders of a Texas State Park Pass enter for free.

Hiking in the Franklin Mountains

From the Tom Mays Unit:
Aztec Caves - A 1.5 mile round trip, steep trail leads up to the Aztec Caves.

West Cottonwood Spring - A steep 1.75 mile trail lead to the spring which has enough water to support on cottonwood tree. There is a bench under the tree making it ideal for a quick snack.

Mundys Gap - A well maintained, 3.5 mile round trip, trail up to the saddle allowing an unobstructed view of the northeast and east sides of El Paso. Continue on the trail past Mundys Gap to reach North Franklin Mountain, Indian Peak, and the Tin Mines.

From the end of Stanton St on the west side of El Paso:
Thousand Steps Trail - A 4 mile round trip hike which leads up to Ranger Peak, the Wyler Aerial Tramway, and a B-36 crash site.

Rock climbing and mountain biking in the Franklin Mountains

Lower Sunset Trail: A 15.5 mile trail with many shortcuts which make shorter loops. The trail starts near the entrance to the Tom Mays Unit off to the left.

There are many other Mountain bike trail in the Franklin Mountains outside of the state park. The best source for information on bike trails is one of the local bike shops such as Crazy Cat Cyclery.

Camping and other activities in the Franklin Mountains

At the Tom Mays Unit there are 5 primitive sites and 5 sites for RV's (No water of electric hookups). There are no ground fires allowed within the park and there is no water available. There is an additional $8.00 fee per site to camp.

The Wtler Aerial Tramway on Ranger Peak is the only publicly accessible aerial tramway in the State of Texas. Admission is $7.00 for adults and $4.00 for children 12 and under.

An Amphitheater at McKelligon Canyon has performances during the summer. Upcoming events can be viewed at Ticket Master.

There are 2 gift shops in the Franklin Mountains, one on Ranger Peak and the other at McKelligon Canyon

The Franklin Mountains can be enjoyed year round. El Paso has a semi-arid climate with very hot summers (with little or no humidity) and mild, dry winters.

The sun shines 302 days per year on average in El Paso, 83 percent of daylight hours, according to the El Paso Weather Bureau. It is from this that the city is nicknamed, The Sun City.

Rainfall averages 8.74 inches (223 mm) per annum, most of which occurs during the summer from July through September. El Paso, at 3,800 feet elevation, is also capable of snow, but it is rare.

Currently the coalition is working to have the Castner Range added to the State park. They are also planning the 2009 Poppies Celebration, which should take place sometime in March.

You can find out more about the Franklin Mountains Wildlife Coalition including their history, upcoming events, next scheduled meeting, and more by visiting there website at www.iloveparks.com

Geological History of the Franklin Mountains from UTEP

Map of the Tom Mays Unit

VCRUX.com, the best source of information on rock climbing in the Franklin Mountains