Fletcher Jordan picked me up at Lynnwood at 6:30am and we drove to the trail head with few stops watching the clouds disappear and sunshine prevail while going through the North Cascades arriving at Wolf Creek sometime around 11am. We were warned of the 10.3 mile approach. Even though there is only a 2,500' difference of elevation, the true gain is closer to 3,000' due to over a dozen rises that bump up and down. I was a bit worried about my knee so I brought a brace that gimpilator lent me which turned out to be a good investment. We took it slow on the way in and it was alright. We noticed that the creeks were swollen and silty. About a mile after the trail forks right we heard what we assume was a bear. The Gardner Meadows were snow-free and had deer and rabbit roaming. We arrived at camp early around 4pm and just took the rest of the afternoon to just relax. I had a chilimac supper with unfiltered water listening to birds.


Heather Joins us for the Gardners

Right around dusk, Heather Anderson walked into camp to join us for our summit bid the next day. She had just climbed Abernathy earlier and came down, drove to the trail-head and caught up to us before dark. She has to be one of the most impressive hikers I know. Fletcher had a good fire going so we chatted as late as we could before settling down for the night. I was sleeping on the ground and was occasionally woken by mice or rabbits jumping around my feet. We got up early around 4:30am and left some gear in camp to go for the Gardners. After discussing it the night before we decided North Gardner should be first since it would allow a good vantage of the route and be the furthest out. Given our forecast of thunderstorms after 11 am we wanted to make it easier if we had to bail while still on Gardner later. Luckily, it never came to that. Our day started with an ascent up easy meadows around Gardner's SW slopes to a snowy bowl below point 8487. The snow began around 7,000'. Gardner cast a shadow keeping the snow firm and justifying our use of crampons. We walked along the edge of a moat until we reached the scree on a saddle between Gardner and point 8487.

North Gardner looked pretty straight forward except a few small sections that from a distance seemed like they might require some scrambling. Up close it didn't really get above class 2. There was one section of Gendarmes at about the low point between point 8487 and North Gardner that I bypassed by walking on snowy slopes to the east. There was a moat so I was a little cautious but it was basically walking. Fletcher and Heather opted for the class 3 scramble route which I took on the way back since the snow had softened significantly. The ridge walk to the summit was easy with a gentle breeze and we summited around 9am. The view was amazing up there but I spent most of the time taking video. Some birds were playing on a cornice near the summit. The register had signs it was stuck by lightning, a reminder of the forecast for later in the day.


Coming back I was a bit slower with my knee sleeve on but it kept the pain down and made me functional. Back at point 8487 we looked at the traverse between the Gardners and decided there was just a little too much snow. I personally didn't have a helmet and probably wouldn't have wanted to do it so it worked out for the best. We decided to drop a few hundred feet and traverse around Gardner on scree and snow patches until we met the standard route. Clouds were building as we went but it seemed we'd get there in time before they got too dark. Heather drank from a stream along the way as it warmed up. 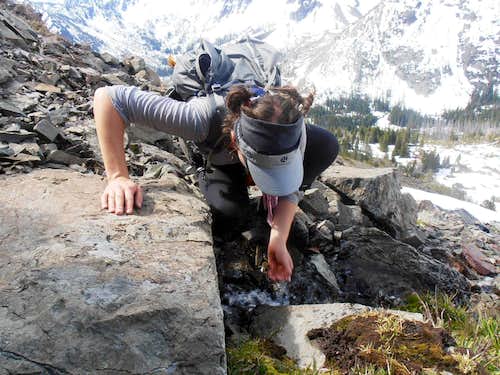 Once at the bottom of a snow gulley that looked like it would go all the way to the summit we began ascending. After a couple hundred feet Fletcher and Heather left it in favor of easy class 2 scree since the snow was softening up making each step deeper. I followed them for a short while but the hard ground was too much for my knee so I went back into the snow and kicked steps up the snow to about 8,500'. Even though my route was parallel to theirs I had fallen behind a little bit so I pulled out my map and walked across some snow and scree to find them at the fairly wide and flat summit of Gardner. By this point it had warmed significantly and the clouds were becoming dark. We couldn't stay too long so we signed the register, Heather offered some snacks, got a cheesy photo in and went down as quickly as possible. Again, Heather and Fletcher went down the scree rib, screeing back to camp in less than 35 minutes while I took the glissade arriving only a couple minutes later. Probably the fastest descent I've done this year. 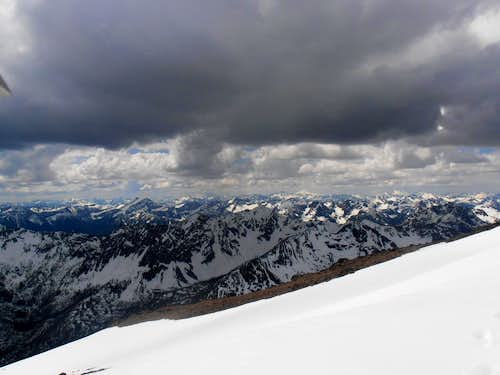 clouds brewing on the descent


Death march back to the car

We would have loved to stay and chill the rest of the afternoon but the threat of a thunderstorm and work the next day had us packing to go pretty quickly. Heather was speedy and left before we had finished lunch. We said good-bye, filled up on water and gathered our gear for the march. Before we left Fletcher had a chat with a backpacker who was camping next to us. Apparently he met the bear we heard the day before and confirmed it was a cinnamon colored small bear. On our way out we used this information to be purposely noisy to avoid conflict when we came to the same spot a mile down the valley and heard the same animal noise. Not too much further along, the distant roll of thunder echoed off the mountains and the sky above Abernathy turned dark. We were glad not to see any precipitation (although it made me realize bringing a jacket wasn't necessary). The last 8 miles out were a bit of torture since the trail regained and lost elevation countless times. There are only two switchbacks in all that monotony. I can only imagine how Heather felt. We came across the lower spine of an animal that we saw on the way in. Possessing no taxonomy skill I couldn't identify it. Occasionally there were open sections on the trail with beautiful garden like displays. We both ran out of water and the last 5 miles were a grind. Finally arriving at the car in late afternoon, I was glad to have left a jug of water for post-hike re-hydration. Fletcher shared a beer to settle the pain and we chatted it up on the way home. All in all, this was actually a very pleasant hike and probably went the best it could have gone.

Mike, you have some very good trip reports... your pics are great. Congrads.

Thank you. I try to write what I remember without bordering on Nathaniel Hawthorne.

Do you live in the area? Show me another NC peak my brother. Cheers

Probably some of the higher peaks you can walk up in the state. I hope you can do this hike sometime. I was looking at Abernathy and thinking the same thing.