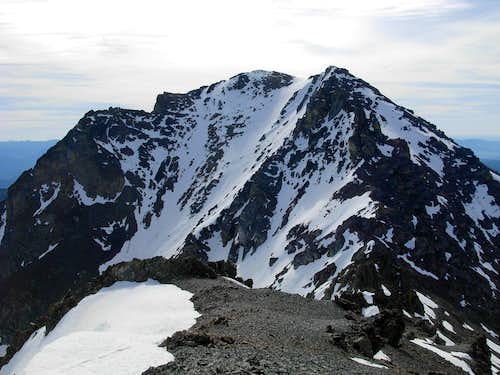 Gardner Mountain has been climbed by many mountaineers for many years. A USGS survey group visited the summit sometime between 1898-99. The group built a 7' tall rock cairn on the summit, of which only a minor lower layer still remains. In the later 1900s, a summit register was brought to the summit by a mountaineering party, but that summit register was apparently struck by lightning and destroyed. 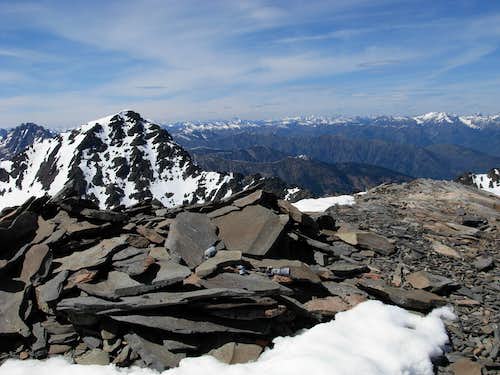 Gardner Mountain has several notable features. The peak has two distinct highpoints, with the northern location being taller. There are also several sub-peaks (false summits) a short distance slightly southeast of the true summit. A small glacier is located in the northeastern gully of the peak. The mountain is largely comprised of volcanic rock and sedimentary rock. As a result, the mountain's slopes, especially the upper slopes, are loose scree and rocks. This particular aspect makes ascents time-consuming, causing some mountaineering parties to instead opt to climb the peak's higher neighbor, North Gardner Mountain, if such extra effort is needed (as North Gardner Mountain is more important on every major peakbagging list). 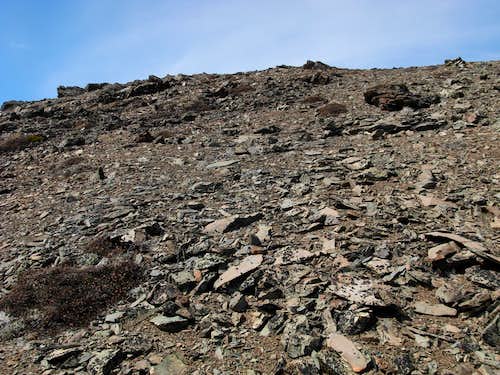 Ascents of Gardner Mountain via the standard southern routes are considered mostly non-technical and YDS Class 2. Some extra precautions should be understood in advance of every summit attempt. In example, an ice axe is recommended during periods of snow-cover, regardless of which route is taken. In addition, western approaches via the "Gardner Traverse" range between YDS Class 3 and YDS Class 4, depending on exact ascent route and conditions.

The optimum timeframe to attempt Gardner Mountain is probably between mid-June and mid-July, while some snow is still on the mountain slopes (helping to ease ascents) but after avalanche danger has basically passed. After snow has disappeared from the standard approaches, expect to ascend steep, loose scree slopes above ~6900' elevation.

Here are the exact driving directions: 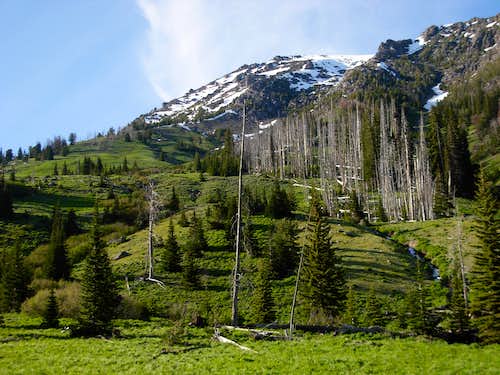 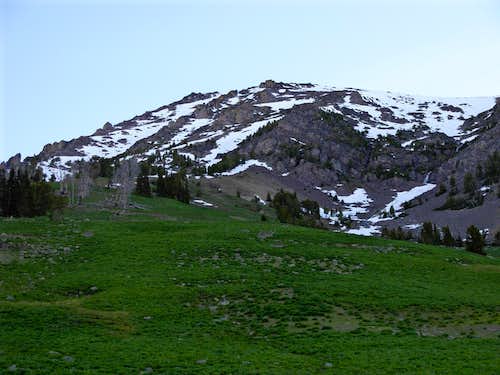 3) Several small couloirs and gullies lead to the summit ridge of Gardner Mountain. The eastern gully is where the stream originates from, and might have cliff bands to also contend with. The central open gully/slopes west of that area is possibly the most direct approach. Both of those gullies lead to a saddle southeast of the summit. Another large gully west of the central large gully is a possibility, and leads to the saddle southwest of the true summit, between the mountain's two highpoints.
It is recommended to allow 4-5 hours for an ascent of the summit via a southern approach from Gardner Meadows. 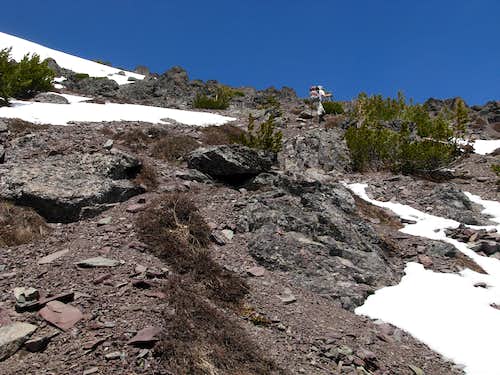 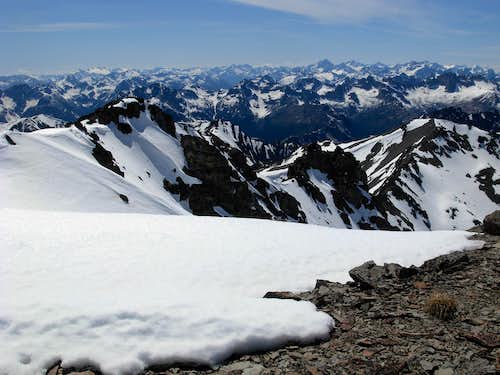 A Northwest Forest Pass (parking permit) is required to park at the Wolf Creek Trailhead.

Wolf Creek Trail #527 is for hiking and equestrian use only.

Wolf Creek Trail, Gardner Meadows, and Gardner Mountain are home to deer, bear, and cougar. The upper slopes of Gardner Mountain and surrounding peaks have also been known habitats for mountain goats and Bighorn Sheep. Make certain to properly hang/store food away from any campsite. Use the "Leave No Trace Behind" policy whenever possible. 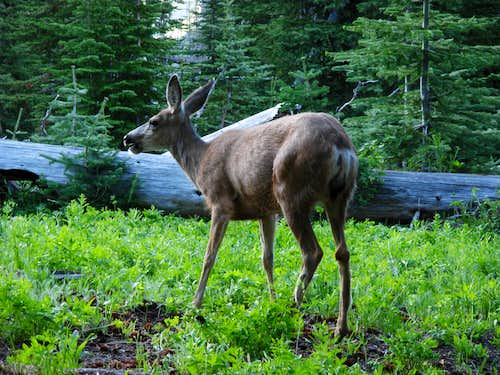 Camping is permitted at Gardner Meadows. Multiple possible campsites can be found. The campsite most sheltered from wind and adverse weather is located with a tiny forest grove just beyond the west side of the small stream heading south through the meadow area, on the left (south) side of Wolf Creek Trail. An old-growth tree can be found within the small grove of evergreen trees. 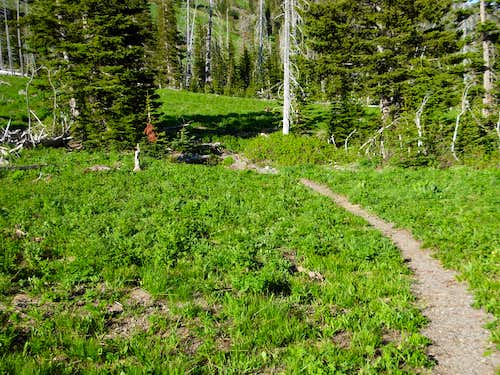 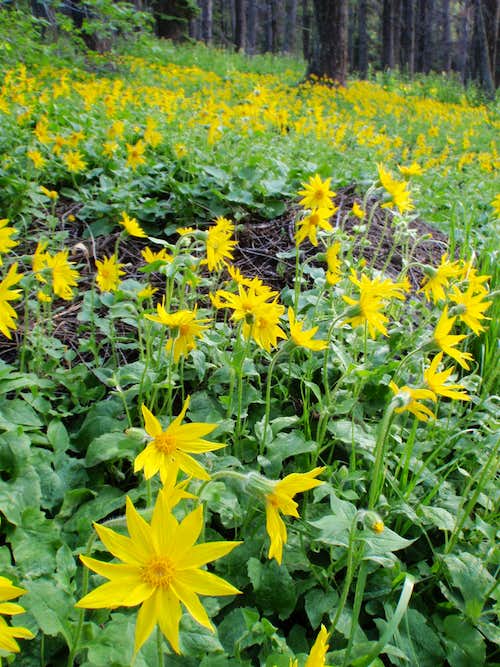 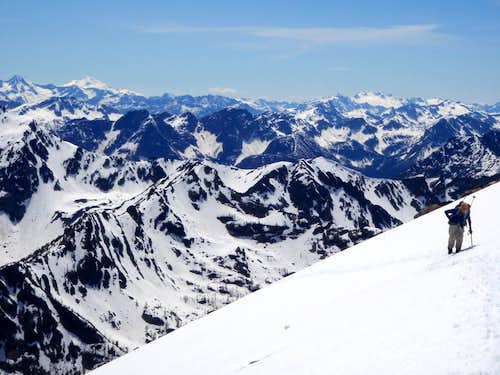