Named for the animals that roam its wilderness, Goat Rocks is an area of approximately 100,000 acres in size located in southeast Washington State (in the Cascades). A variety of terrain exists, ranging from desert-like conditions of the Tieton River Canyon to its alpine meadows,

Ridge Trail with Rainier in the background

The peaks are thought to be the remnants of a defunct volcano that may have once risen to 12,000 feet in elevation. Several glaciers are found on the north sides of these peaks (among them are Conrad, Meade, Tieton and McCall). Glacial activity has exposed lava spires and other rock formations. Goat Rocks can be seen when looking when looking south from the peak of Mt. Rainier, located to the Left of Mount Adams.

The Pacific Crest National Scenic Trail, which connects Canada and Mexico, passes through the Goat Rocks. Many of the approaches into the Goat Rocks Wilderness are somewhat long, so consider overnight trips (planned or unplanned). Timberline occurs at about 6,000-6,500 ft (1,800-2,000 m) and there are significant opportunities for alpine skiing. 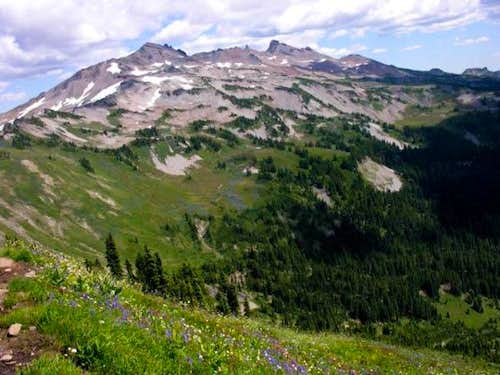 Rain and Flooding in Washington

A great deal of flooding has occurred in and near the Goat Rocks area due to heavy rainfall over the past week. The Cowlitz River overran its banks and is reported to have "changed course" near Packwood. Certain locations may be inaccessible. Be careful.

From Hood River, take 141 NORTH through White Salmon to Trout Lake. Follow 23 North and follow the signs toward Randle. Take Forest Road 55 and then 22, following signs to Packwood and Chambers Lake. A few miles after the sign for Walupt Lake and just before Hugo Lake take a hard Right, and follow signs to Chambers Lake on 2150. Follow the signs to Snowgrass (Trail 96), or Berry Patch (Trail 95) just a 1/4 mile away (if you are riding horses).

Some trailhead parking areas require a Northwest Forest Pass ($5/day or $30/year). The Goat Rocks Wilderness is administered by the Gifford Pinchot National Forest and the Wenatchee National Forest. Because it is part of the National Wilderness Preservation System, motorized equipment and equipment used for mechanical transport is generally prohibited. This includes the use of motor vehicles, motorboats, motorized equipment, bicycles, hang gliders, wagons, carts, portage wheels, and the landing of aircraft including helicopters, unless provided for in specific legislation.

The Yakima Indian Reservation, bordering the Goat Rocks Wilderness on the southeast side, is closed to the general public, except for the Pacific Crest National Scenic Trail.

The Forest Service publishes a map of the area, entitled Goat Rocks Wilderness.

There are established campsites in the area and camping is permitted (free of charge) at Chambers Lake Campground near the Berry Patch Trailhead. See “Getting There” (above) for directions to Berry Patch.