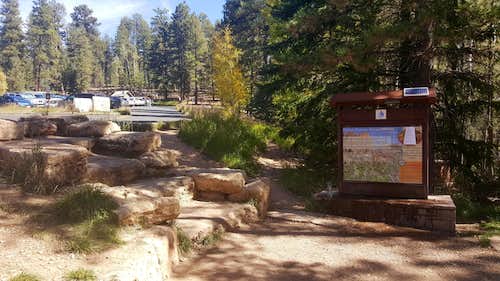 The Rim to Rim trek I did was from Grand Canyon North Rim, going down the North Kaibab trail, to Grand Canyon South Rim, going up the Bright Angel trail. Distance: 14.2 miles to the Colorado River and 9.2 miles from the river to the South Rim. Total time 7 hours and 45 minutes; total distance 23.4 miles.

I was among the lucky hikers of the day since for a few weeks there was heavy downpour every day all over the Canyon(monsoon season.) Actually that very night, around 3 am, there was such a heavy rain, I felt sorry for everyone that slept in a tent. I was told later that day that starting at 7:30 am, a heavy rain lingered around North Rim for hours, discouraging lots of hikers to get on the trails. I was sorry for them. It is a though one to be ready for a hike but not be able to even get going due to events out of one's control. It actually did not rain in the canyon at all. I was there. It only rained at the top of the rim. But I guess nobody knew there was absolutely no rain down the trail.

I started the hike at 5:20 AM. I got at the North Kaibab trailhead at 5:05 AM but it was pitch black out. I thought I would wait 10-15 minutes rather than carrying a flashlight with me for 24 miles.

As a bit of light started to show on the East, I hit the trail like there was a prize waiting for me at the other end. In the first 2 miles I passed everyone that started the hike before me. From there down I did not meet any hikers until a couple of miles from the river. They were coming up, probably rim to rim to rim-ers.

The first, top) part of the trail, probably 4-5 miles, it’s just steep downhill hiking. After that the incline is so nice, I think running would have been a better option than hiking. The sky was cloudy, so I was beautifully protected from the Sun and heat, while rushing down the trail. I was concerned (although I trained the whole spring and summer for various hikes, including this one) that I'd need 12 hours to finish. I didn’t. I got to the river in 4 hours and 20 minutes.

The middle part of North Kaibab trail is more beautiful than I ever imagined. I hiked down in the Grand Canyon two years ago on South Kaibab and up Bright Angel (Rim to River to Rim), but that side was nothing compared in beauty to the North Rim. I really enjoyed the hike at that morning hour, the birds chirping at the sight of light, cool air and nice breeze in certain areas. I enjoyed all nature and scenery on the go, mainly concerned that I'd never finish this hike. Every description of rim to rim I read made such a big deal about it, I was constantly nervous something would go wrong.

During this entire Rim to Rim I did not stop to rest for a single minute. I could have stopped at Phantom Ranch to drink lemonade or eat something, but I was neither thirsty nor hungry, I did not need water in my bottles and I was very concerned that if I stopped I would have had a hard time getting going again. I don't know why I thought that way since I did not feel tired in the slightest. I was maybe paranoid. 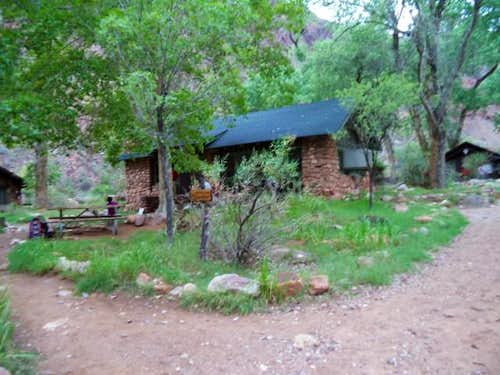 Phantom Ranch
So I glanced at the Phantom Ranch while passing by it, I took a picture that came out fuzzy since I was moving, and I was on my way. As I passed the Colorado River over the Silver bridge and got on the River Trail, some serious rain started coming down. I thought that my luck was over, but five minutes after I put my rain jacket on, the rain stopped. And that was the end of the rain until I reached the top.


On my way up, at the River Resthouse, another hiker, a younger man than I am, got behind me. By the fact that he was traveling very light it seemed that he came down from Bright Angel trail head to Colorado River and now he was heading back up. I kept a very high pace going up, about 20 minutes a mile. He kept up with me but I was determined not to let him pass, mainly for morale. This guy was in a very good shape himself and helped me keep going fast just by being 15 feet behind me. We did not exchanged words the entire time but he followed me through the Devil’s Corkscrew up until almost the Indian Campground. When I turned around I did not see him anymore. There I refilled one bottle of water and hit the trail with less than 15 seconds delay. From there I did not see the anonymous hiking partner. I continued alone. 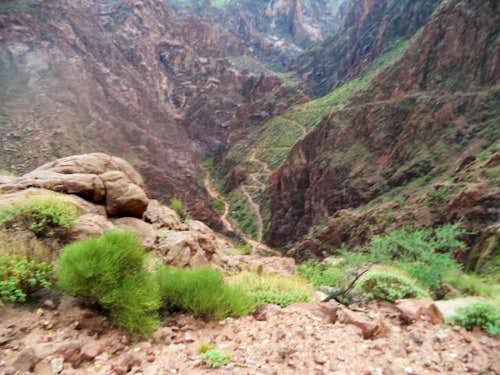 From this point I had 4.5 miles to the top. Sun came out, temperature raised. In the beginning just here and there but in the last 3 miles the Sun hit everything in all its power. By this point I did not care. I had just 3 miles to go, so I was basically done. And getting a bit tired, but not to the extend of what I imagined, based on the reviews I read. And the trail was getting crowded with mostly annoying tennis shoes visitors that never give the right of way to up going hikers. That made me very upset since they were breaking my rhythm and I could feel I was getting tired because of that.

Once I reached the top I finally got my wet t-shirt and shoes off and laid down on a bench enjoying the recovery drink, my feet shaking like I just outrun a bear. I realized at that point that I did not check the time when I finished the hike. By now it was 1:20 PM. By estimating how much time I spent at the top already I concluded that it took me 7 hours and 45 minutes to hike Rim to Rim. I would say not bad for a first timer. Not even an hour after I got to the top, a heavy rain rolled in and made life miserable for all hikers and tourists. The rain lasted 2 hours and 30 minutes. I know that because although I crossed Rim to Rim on foot, my wife only made it from North Rim to South Rim 2 ½ hours after I finished the hike. Annoying, but that is life. I sat on a bench and watched the rain. And the unprepared tennis shoes visitors that were coming up the trail wet, dirty, muddy and miserable for their 2 mile hike turned into a mess. Life is very fair after all. 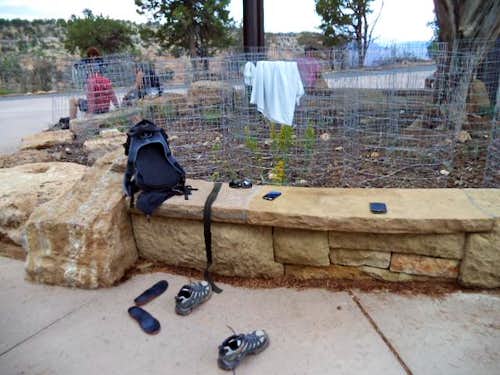 Pros: there is plenty of water (spring, creek and tap) along the trail. There is Bright Angel Creek along the North Kaibab trail, Roaring Spring and lots of other potable water sources provided by the park.

Cons: visitors walking down and up in the top 2 miles of Bright Angel with no respect for hikers. Next time I'm going to get some mud on my hands and just touch their clean cloths if they bump into me. There.


Water: the water from the creek, due to all the rain I mentioned, looked like a flow of mud rather than water. I would have not drunk that water even filtered. It looked like red mud. I’ll try to post some pictures to get a clue. There is also water at the Phantom Ranch, and before crossing the river. Then from the river the first water source is at the Indian Campground, which is 4.5 miles from the last water source. From here, going up, there is potable water at mile 3 and 1.5. So there is no need to carry too much water. I had with me 3 bottles of Gatorade (I only used 2) and two bottles of .5 L water which I refilled once). So in other words I used 3 liters of liquid. That is actually the 100 oz everyone recommends of carrying while hiking this hike. The only difference is that I did not carry it all at once. Keep in mind that I hiked during a cloudy, humid day. A hike like this in the scorching Summer Sun would be a big difference.

Food: As far as food I used 3 energy bars and one prosciutto and Brie sandwich. Although very tasty, that sandwich was an useless item to carry with me; it did not provide much energy. All in all my backpack weighted 12 lb.

The only item of clothing I had with me was a gortex windbreaker which I always carry regardless of the hike.

Welcome to SP! I enjoy reading about the North Rim and any trail there.

Small suggestion: selecting a Primary Image for albums and trip reports sets the tone for SP members opening and reading your submission. It's easy to edit a TR and put the primary image in etc. It's also just a bit harder to insert a shot or two into the report itself.---Kathy

Kathy,
You probably do not remember leaving this comment. I has been more than 2 years now. You probably don't remember this page either. Anyway, thank you for leaving this message and making your suggestion. That probably made me put a lot more thought into putting together my pages and coming up with livelier layouts. Today I rearranged this page a little bit and inserted some pics along with the text for easier reading.
Thanks again.

Glad to help and that you took the time to reply.

See you around SP!