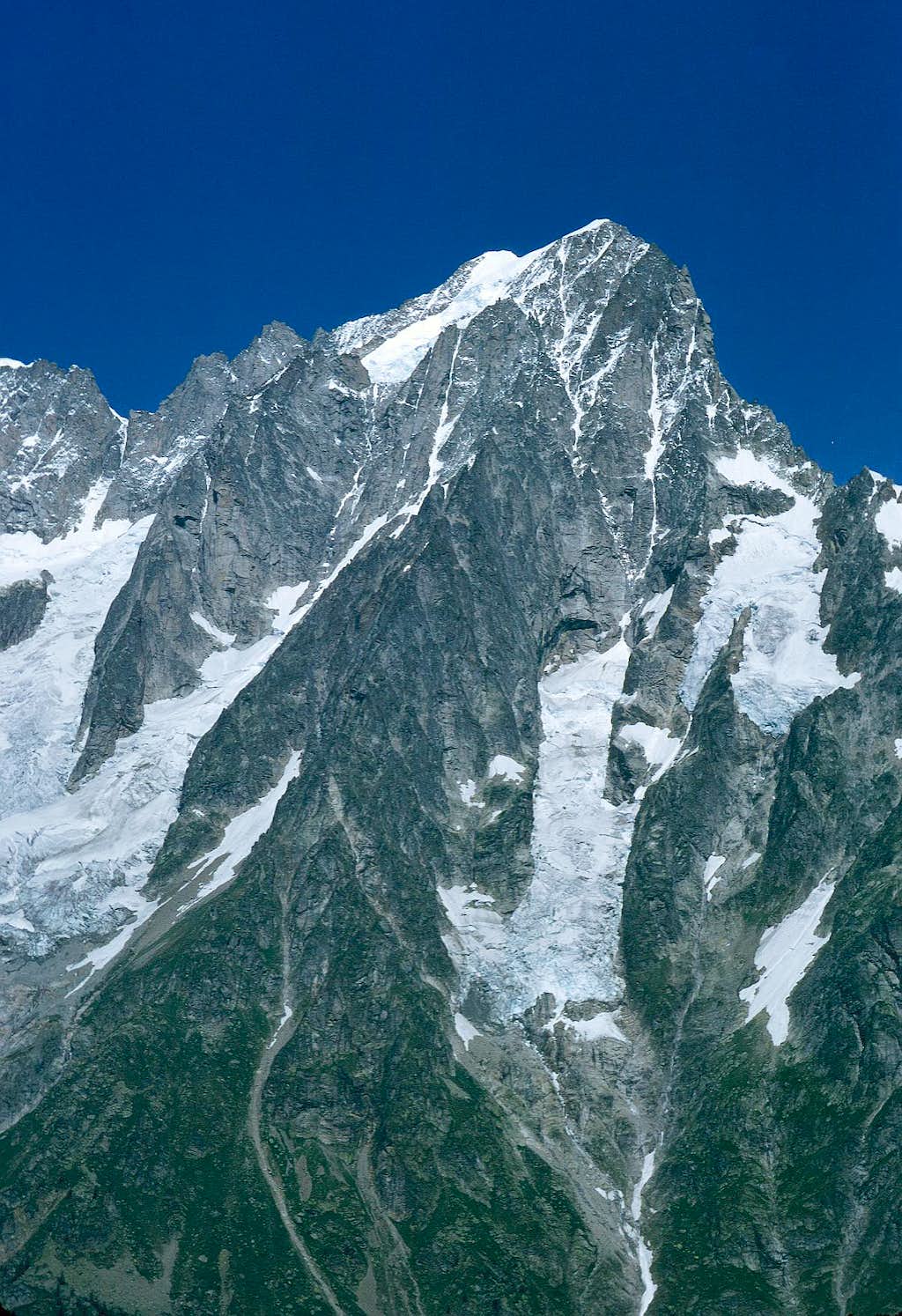 The highest rock face of the MB range

Does it look small? Actually, is 200 mt higher than the famous north face!

This is it - the Tronchey Wall. Only three routes passes on this face, and all have never been repeated!

1) Rand Herron - Elisee Croux in 1926 did a long ascending traverse on the upper part of the face from right to left, escaping from the Tronchey Ridge

2) Alessandro Gogna and Guido Machetto ascended the lower overhangs and then continued over the (rotten) middle spur (they where the first humans to pass the small and extremely crevassed Tronchey glacier). This route was most aid (A1 - A2)

3) Famed ice specialists Giancarlo Grassi and Renzo Luzi with Maurizo Rossi opened, after seven attempts, a "direttissima" over the ephemeral gully starting from the Tronchey glacier over a series of overhaning icefalls (scottish V - VI), then over a 250 mts horizontal traverse (non reversible) and then up a 80° snow and ice couloir). It took three days for the FA to complete. Accessing the beginning of the route takes at least one day, and is not straightforward. One of the most serious and committing routes of the entire alps, never repeated

Very useful and nice information signorellil, thanks. If I was the maintainer of Grandes Jorasses page I would embed it into the text on main page. GJ is such an important mountain but it is quite 'poorly' represented on SP, at least in my opinion, which is pity.

Rand Herron fell down the Great Pyramid (class 3 or 4?) and died.

Do you want to maintain Grandes Jorasses Page ?

Om, thanks for the offer but GJ is not my backyard mountain so I don't consider myself qualified enough to be its maintainer. I could improve it but never to the level that I would like to achieve because of lack of personal experience. If signorellil can make it better you can give it to him. I hope that you don't mind my comment but I think page is too scarce for the mountain which is significant on the world level. Cheers, Aleksandar

Thanks for posting OM.

Up to this moment, I had not seen any pictures of this face. Beautiful.

According to the latest survey, the height of this wall is 1435 m., from the glacier to the top of Pointe Walker