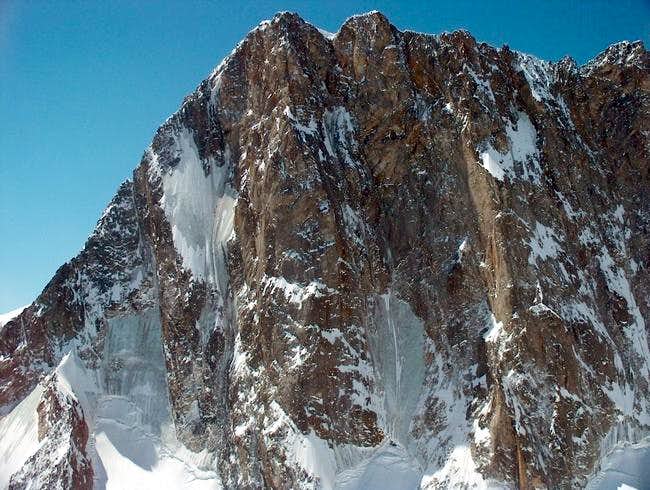 A sincere thank you to Olivier, the former maintainer, who gave me this chance.

This page is respectfully dedicated to the memory of Rahel Maria Liu (1970-2004) killed by a storm on the Innominata Spur of Mt. Blanc, Aug. 24th 2004. The normal route of Grandes Jorasses was her last completed climb, on Aug. 12th 2004.
I wish I had the right words, Rahel. But I just can't find them.

Les Grandes Jorasses are, simply speaking, the most strikingly complex and powerful structure of the entire Mont Blanc massif. Less universally known than the Matterhorn, less slender than the Verte-Dru group and 600m lower than Mont Blanc, nevertheless the Grandes Jorasses exudes, most spectacularly in the famous north face, an air of mystery and power that has no rivals in the entire Alps, except (maybe) for the sinister spire of the Aiguille Noire De Peuterey. If Mt. Blanc is the king of the Alps, the Grandes Jorasses complex is truly the queen.

What's called Grandes Jorasses is actually a collection of summits, linked by a relatively regular ridge, 1 km long. From left to right (seen from south)

Grandes Jorasses may be divided in four different sectors and three major ridges:

On the Italian – French frontier:

This webcam shows the MB massif from the Aig. Du Geant to the Grandes Jorasses (on the extreme right). The image is refreshed every few minutes. Sunrise and sunset time are expecially interesting. The "star" you see sometimes at night at middle-left of the image is the Mt. Frety cablecar station light.

A big thank to Roberto Picchiottino and www.valdigne.com for their kind permission

- by train to Montenvers (1909m.). Timetable varies according to the seasons, usually 8:30AM-6:30PM. Line usually closed from Nov. 15 to Dec. 5. For more information visit the official site of the Montenvers train here

- By the bus service – one trip each 40 minutes. In Courmayeur the bus can be taken from the Bus Station (near the tunnel highway entrance).

This is an overview of the many routes of the Grandes Jorasses. Individual routes of special interest will have, in time, their own page.

The SW sector of Grandes Jorasses (facing Courmayeur) is really a complex agglomerate of spurs, glaciers, steep ridges and peculiar rock structures, where a great number of interesting lines has been established. Unfortunately, beyond the normal route, the west ridge (and some climb in the modern idiom on the lower part of the Tour Des Jorasses ? that will be covered in the future as a separate summit), most of the lines here see very little traffic. This is partially because of the uneven quality of the rock, but it must be said that it’s actually not worse than in some of the most celebrated climb of the North Face. On the other hand, the recent changes on the Planpincieux on Grandes Jorasses glaciers have made reaching the base of some of these routes much more difficult.

The most misterious and overlooked of all Jorasses ridges is by far this one. Starting above the Tronchey hamlet it forms first the small group of the Petites Aiguilles, and then the remotes Aiguilles de Pra Sec. Keeping in theme with the general remoteness of this sector of the Alps, the Northern Aiguilles was climbed only in 1971. The ridge continues straight up to the Pt. Walker. While never extreme, the integral ridge is a long undertaking that gets repeated only a couple of time every decade.

The routes upon this wall (the highest of the entire massif, and the last one to be climbed) while definitely obscure items, are holding several records. For instance, the Pra Sec glacier had been never crossed by human beings before Alessandro Gogna and Guido Machetto climbed their line in 1972! All the routes described must be approached directly from the Tronchey car park (and camping); there’s no intermediate hut. In other words, you’re on your own, in one of the last truly adventurous terrains of the massif, and a retreat from the upper part of this wall in bad weather would be impossible. Because of the relatively low altitude of the wall base and the southern exposure, rapidly melting snow can create spectacular but dangerous waterfalls on the left hand couloir.

This elegant, solitary and (in the upper part) exposed ridge, creates a perfect square corner between the E face and the Tronchey wall, and is another overlooked area yet not fearing comparison with the most celebrated ridges of the fashionable part of the massif. However, fact speak for themselves ? the little Jachia hut at the base of the ridge sees an average of only 4 visitors per year! This may be seen as a curse, but in fact it's the blessing of the Tronchey ridge ? one of the few corners of the massif where you can breath the same atmosphere the big pioneers breathed. However, it’s necessary to remind that every route here, while not extreme, is nevertheless serious, and should be attempted only by parties technically competent and physically fit.

One of the most beautiful rock faces of the Alps, almost entirely made of wonderfully solid granite (much better than anywhere else in this mountain!) the east face is Grandes Jorasses most haunting vision. Truly a "mountaineer's face", little know outside climbing circles, all the routes here are held in special consideration, if only because rarely repeated and always by talented parties. The major problem is the approach - the classic traverse from the Col Des Hirondelles may be dangerous in the lower part. In recent years, some repeater as reached the lower "Y" couloir on the L, traversing from the Tronchey ridge over a system of ledges. It's a safer approach, but is technically more difficult, and forces a long climb from the bottom of the Val Ferret.

This imposing wall has an almost mythical status on mountaineering circles, and there’s little doubt that opening a new route on the “Paroi Nord” of the Grandes Jorasses means gaining much prestige, especially on the heavily hyped European climbing scene/. And there’s no doubt that NO route of this face is less than serious and difficult, even the popular lines, like the Linceuil and the Cassin route. Some of the hardest climbs of the entire history of alpine climbing have been made here.

Thus said, reading this list may be a little confusing for the novice, because the grades for high difficulty, seldom-repeated routes are, admittedly, all the same. In other words, it’s impossible to make a meaningful “chart” of the most difficult routes of this wall ? given the enormous differences in conditions, weather and material between the FA and the repeaters. However, there are two different tendencies that may emerge reviewing this list. The first is that many repeaters, especially locals (i.e. from the Chamonix scene) tend to criticise as “overrated” many lines put up by “foreigners” (i.e. people coming from outside the Chamonix scene). The second (recent) trend is to re-evaluate the few, hardest lines put from 1960 to 1980, and, conversely, to downgrade a bit the most publicised exploits of the 80’s and 90’, often found by repeaters to be no more difficult than the older routes.

This is a welcome trend towards a level headed appraisal of the history of this tremendous wall, and could probably help future repeaters to appreciate more the efforts of their predecessors.

Thank you Piotr! I've read about this recent new route, but I didn't had any precise topo - so your link is tryuly welcome! And thanks for correcting the Polish names spelling.

Thanks Olivier, I've added a link for this one.

Thank you Piotr! I've read about this recent new route, but I didn't had any precise topo - so your link is tryuly welcome! And thanks for correcting the Polish names spelling.

Thanks Olivier, I've added a link for this one.

I never met you ,Rahel ;
I'll meet you up ,on every mountain's top .
ciao mamo

Sorry, I hadn't understood that you posted the link to a nice photo collection .
Perhaps you should emphasize it better in the link.
However the only link to the page of Pointe de Drône seems to be already sufficient.