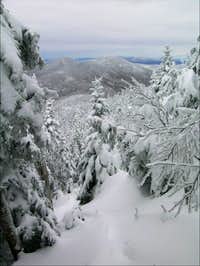 The Green Mountains are a part of the much larger Appalachian Mountain chain running the length of Vermont and continuing north and south into Quebec and Massachusetts. Vermont's 160-mile portion varies from 20 to 36 miles wide. The highest peaks are above 4,000 feet.

Three alpine tundra areas can be found on the higher peaks. These rare environments mimic species found 1500 miles to the north. Mt. Mansfield (highest in VT) has the largest tundra zone at 250 acres. There are another 10 acres on Camel's Hump and a small patch on Mt Abraham.

It is important to stay on the trails within these areas and minimize your impact.

Getting to Vermont and the Green Mountains

There are two periods per year when the hikers are "strongly encouraged" to avoid certain (especially higher elevation) trails.

During these times soft, wet trails can be highly vulnerable to damage. If you find yourself in such a situation turn around and hike elsewhere rather than damaging the environment.

Adult black flies are small insects between 1 and 5 mm in length, possess a shiny thorax that ranges in color from black to various shades of gray or yellow, and most obviously have a "humpback" appearance that has led to them being called buffalo flies in some areas. They are classified in the phylum Arthropoda, class Insecta, order Diptera, and family Simuliidae. There are over a hundred species of Simuliidae but fortunately few species take a blood meal. Indeed evolution has left some species with such withered mouthparts any biting may be impossible.

Outdoorspeople in Vermont need to be aware of black fly season which is late May through late July. This is when mature black flies leave their pupa and begin feeding. Being unprotected during black fly season can be a horrible experience. Besides simply landing on exposed skin they enjoy crawling into your hair to attack your scalp. In my case they also loved to crawl behind my ear to the tender skin behind my earlobe. The bites can be extremely painful and later itchy. Oddly enough sometimes the bites do not hurt and the first indication is a drop of blood running down your arm.

The best protection is DEET or smokey fires. Black flies do not feed at night.

Vermont is well known for its world-class skiing. The map below shows the distribution of resorts. It's obvious where the bulk of the Green Mountains are located. 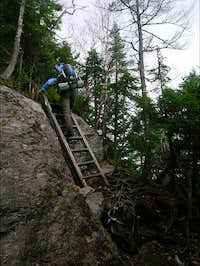 Completed in 1930 the Long Trail is the oldest long-distance trail in the United States. At 270 miles the LT as it is known runs peak to peak to peak along the ridge of the Green Mountains from the Massachusetts border to the Canadian border, and provides the hiker and backpacker with a beautiful backcountry trail and access to many of the Green Mountain's best areas.

About 70 people per year successfully complete the entire trail and become End to Enders.

The Appalachian National Scenic Trail travels through 14 states in it's journey from Georgia to Maine along the ridges and across the valleys of the Appalachian mountains for more than 2,172 miles. In Vermont it coincides with the southernmost one hundred miles of the Long Trail. Just beyond Rt 4 near Killington the AT turns east and leaves the Green Mountains in its journey to New Hampshire and Maine.