While looking at maps, I wondered what a traverse between these two peaks would be like.  When checking summit logs here, I found an entry by someone who had done the traverse, but there was little beta with it, so I thought it would be nice to try the route myself and then share the beta here.
Something nice about doing this traverse is that you can do it as a day trip and hit two peaks that normally are climbed separately from two trailheads that are many miles apart.
Another nice thing about it is that in a mountain range where so many peaks are no harder than Class 2, here you get two Class 3/4 peaks in one outing without having to do any backpacking.
Hayden from East Hayden, with the connecting ridge entirely visibl 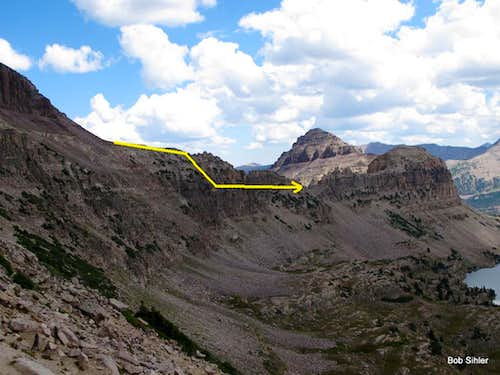 This is from near the notch between Hayden and Agassiz. The diagram shows (a) the general location for accessing the ledge system and (b) the approximate location of the ledge system that will avoid the cliffing out that will result directly on the crest of the ridge.

The best trailhead to use is that for the Highline Trail.  It is 2 or 3 miles north of Mirror Lake off the Mirror Lake Scenic Byway (150) that connects Evanston, WY, and Kamas, UT.  It is easy to find the large, well-signed parking area.
The other trailhead one could use is the Christmas Meadows one.  To reach it, continue north from Highline for several miles and then turn onto a spur that heads south to the trailhead and campground.  Using this trailhead only makes sense if you are backpacking or if you are doing a day trip utilizing a shuttle.  Using it for an out-and-back day is going to make for a very long day, and potentially a really hazardous one since you will be up high later in the day and the Uintas generate a lot of thunderstorms due to their height and isolation.

Although the route can be done in either direction, it makes more sense to do it from Highline if it is a day trip, and that is the way I will describe it.
[Note: you can also use this route (it is for East Hayden only and overlaps portions of this route) to climb both peaks on a day trip, but it entails significant elevation loss along the way and the same amount to regain if it is the return route as well.  The only real reason to use that route for both peaks in a day is to visit the beautiful lake basin (Middle Basin) east of the peaks or simply to make a small loop part of the outing.]
From the trailhead, either strike out off-trail across a meadow and into forest in the direction of Hayden Peak or hike a short distance on the Highline Trail and then leave it, aiming for a rocky spur ridge visible through the trees ahead.  If you do the latter, you may come across a decent use trail that leads to the talus at the base of the west side of the spur and Hayden's south ridge.
Your next objective is to climb up the talus (Class 2) to the prominent notch separating Hayden's south ridge from the long ridge leading to the summit of Mount Agassiz.  By late summer, there probably will be no snow left in the couloir below the notch.  Earlier in the summer, at least an ice axe might be necessary.  You should be able to preview this part of the route from locations along the road, though.
The SP route page for Hayden's south ridge makes it sound as though there is a difficult crack to negotiate before one reaches the south ridge proper.  All I can speculate is that the author took a different approach that did not utilize the notch, for I never found anything close to that crack along my approach.  UPDATE: The author did indeed use a different approach.  I have since adopted the page, and the original description is under Option 2.
Once at the notch, head north (often there is a use trail skirting easy scrambling objectives) along the ridge to the summit area.
The way I found to the summit did not quite match the description on the route page, either.  While the author worked north past the summit and then circled back, I found something more direct via a Class 4/5 chimney/corner.  A much harder variation was nearby.  Anyway, my way was more direct and put me a short distance southwest of the summit.  Getting up that chimney/corner was the only technically challenging part of my route to Hayden's summit.
Bottom line: take some time up there near the summit and find the variation that works for you; Class 3-5 possibilities exist.
Distance to the summit is about 2 miles, with an elevation gain of about 2100'.
Now the fun begins.  Actually, there is quite a bit of fun, with great scenery, for the next 1-1.5 mi, between here and Point 11,863.
It starts as a Class 3 descent from the summit.  Soon, there is a choice: stick with the ridge or go with a steep, obvious couloir.  The ridge is more challenging but appears to go.  Note the appears; I opted for the couloir because I thought I saw a good way from it to the next objective on the route-- the saddle between the east ridge of Hayden and the west ridge of Point 11,863.
If you are doing this route in the reverse order, I do recommend giving the ridge a go when you reach this section because the couloir is very steep and ridiculously loose.
Descending the couloir, which has some Class 3/4 spots, be aware that you do not want to follow the couloir to its terminus, for doing so will take you far too low, and cliffing out looks very likely if you continue beyond there.  Instead, exit when you are approximately level with (or a bit higher than) the saddle between Hayden and the ridge to East Hayden.  Expect Class 3 scrambling here and maybe some Class 4.
From the saddle, follow the the ridge for a bit, with a pleasant mix of hiking and scrambling, but the farther you go, start looking to your right for a way down to a shelf system about 60-100 feet below.  There are some Class 3 and 4 options for this.  While there are numerous spots one could rappel from, rock quality is questionable, and I did not really pay attention to anchor-building potential out here since I had no suitable gear with me. 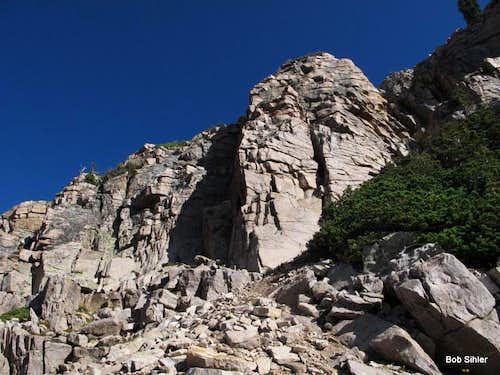 I took this shot to show the location where I descended from the ridge crest on the way to East Hayden and climbed back up on the return.
If you do not look for or notice a way down, you will have to soon enough, for you will eventually reach a drop that will force you back unless you are equipped to rappel and the rock provides both opportunities and stability for a good anchor.
Once on the shelf system, follow a ledge (sometimes showing a game trail), sometimes narrow and sometimes broad below a series of spectacular pinnacles all the way to a saddle below Point 11,863.  Mostly, the going is Class 2, but there is an occasional short scramble.
Hike up to the summit of this unranked peak, and then make an easy drop (only about 80' of elevation loss) to the saddle between it and East Hayden.  Then head northeast up the slopes just right of and below the ridge crest, eventually doing some Class 3 scrambling to attain the summit area.

After climbing Hayden and East Hayden, it is not necessary to reclimb Hayden on the return. Contouring across this section (Class 2) will get you back to Hayden's south ridge close to the Hayden-Agassiz saddle.  First, though, you will have to climb back up from the shelf you used to bypass much of the ridge crest earlier.  If you try to go directly from the shelf to the contouring traverse, sheer cliffs will block you. 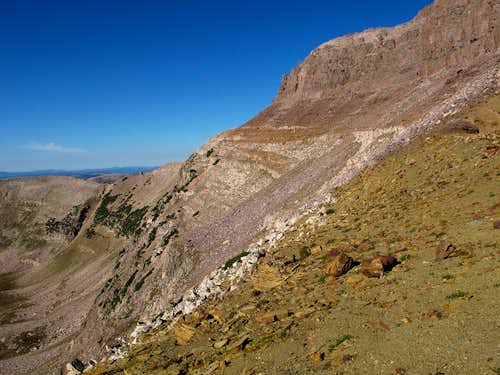 RT distance is about 8 miles, and elevation gain is around 3000', more if you reclimb Hayden on the return.  Note: if you are doing this route from East Hayden, I do not know if there is a way to bypass reclimbing that peak on the return. 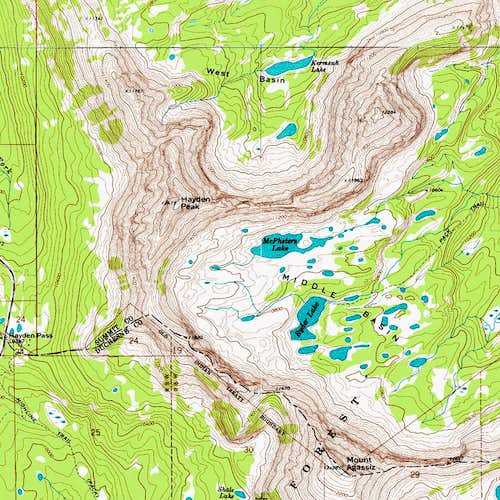