Heading to the Trail Head 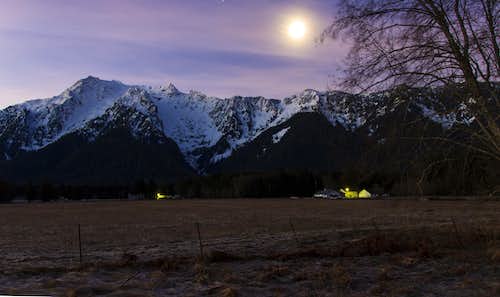 There was some interesting lighting from the rising sun and a half moon. 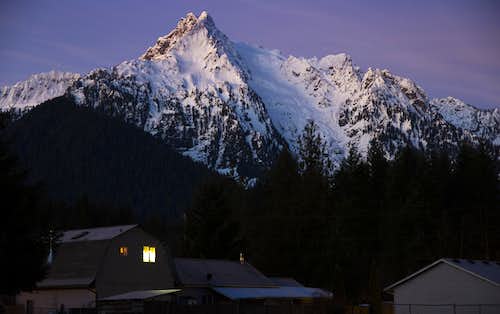 Three Fingers at sunrise.
Two of my friends and I headed out of Seattle at 5am and reached Cascade River Rd. around 8am. The snow plow had stopped plowing about 2 miles before the Sibley Creek trail at 1200 ft. We attempted to drive through the snow, but we got stuck and decided to turn back and park. A half a mile down the road, two cars had gotten stuck. Glad we didn't drive further!

We walked the 2 miles to the trail and then put on our snowshoes. There were ski tracks leading up that looked a day old. They made it much easier to hike, rather than breaking trail.

Around 1pm the snow was melting and our snowshoes were sinking in. We heard a loud avalanche several miles away. Glad we were in the trees on the west ridge! The avalanche danger was more likely on the south-east faces according to the avalanche forecast.


Out of the Trees

When we got about 300 vertical ft. from the lookout when we ran into the skiers, whose trail we had been following the entire way. They had been there a day and were up for the weekend for some back-country skiing.
It took another hour to get to the lookout, having to hike around the south peak to get to the ridge that leads up to the lookout. The last 30 minutes the sun was completely gone, but with the starlight I didn't need to pull out my headlamp.

Finally out of the trees and almost within sight of the fire lookout. 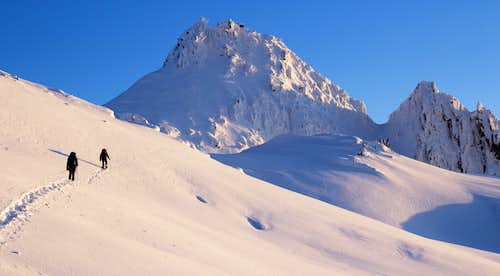 Finally within sight of the lookout after 7 hrs of hiking. 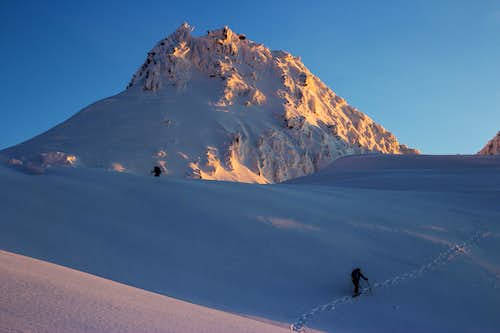 The sun started to set as we neared the lookout. 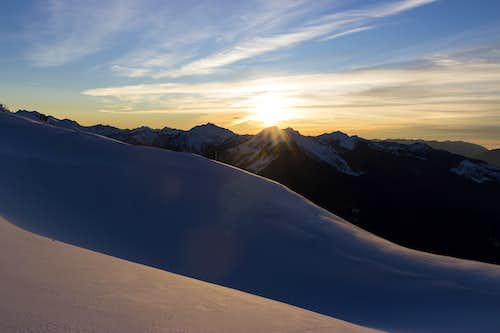 One of the best sunsets I have ever witnessed! 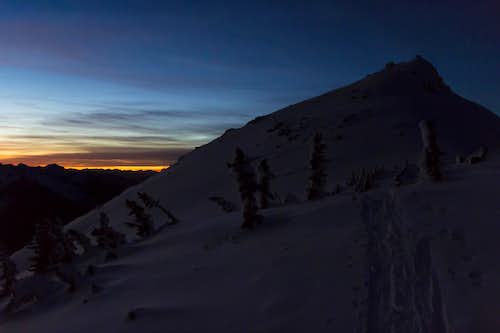 The sun had gone past the horizon, but I could still see easily enough to not need my headlamp.

Circling the south peak to climb up the eastern ridge. 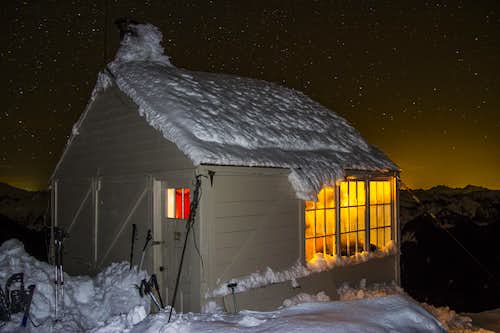 The skies were incredibly clear!
We got to the cabin at 6:30pm, 9 and a half hours and 9 miles from our starting point. We were pretty out of energy. When we got in, the skiers had a propane heater going and it was 50 degrees inside. Outside, it was around 25 degrees with light winds.  We had brought two Duraflame logs and got those going with a little white gas. We ate our dinner with some wine and melted snow over the stove. The logs warmed the cabin to a toasty 60 degrees.

I spent an hour taking pictures and watching the stars. Mt. Baker looked incredible with light coming from Bellingham. The skiers took the beds, but there were 3 extra mats to use on the floor. I was a little too hot in my zero bag, even with it opened halfway. 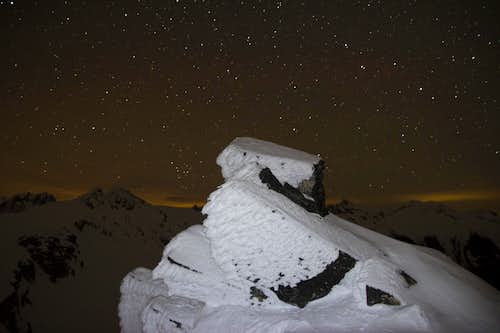 Some rocks perched at the top of the south peak 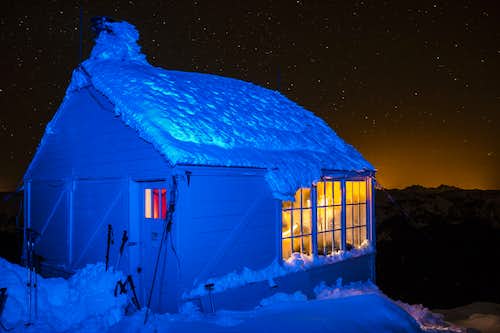 Playing around with my blue headlamp light. 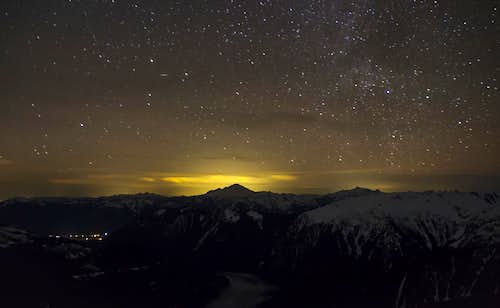 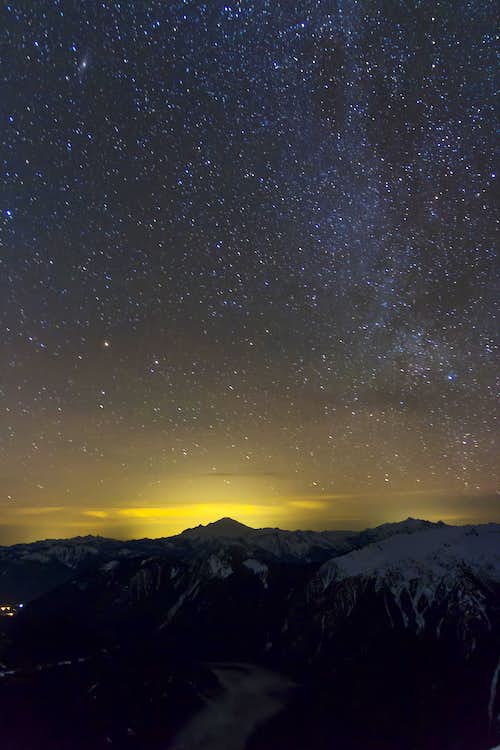 It was nice to get away from all the light pollution and see the Milky Way. 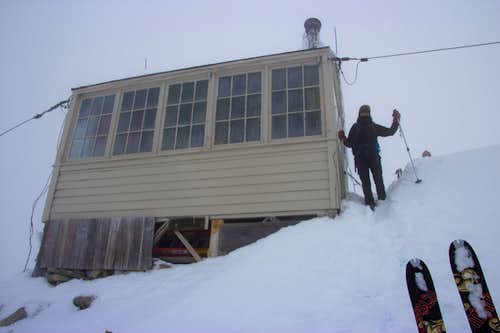 A dense fog surrounded the lookout 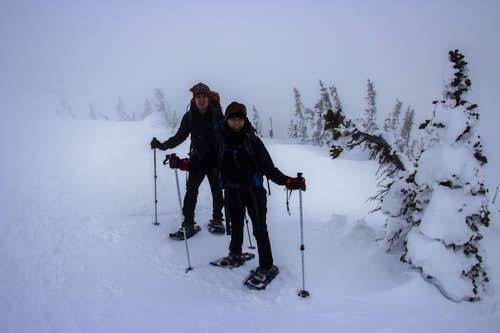 Route finding was a little difficult with dense fog. 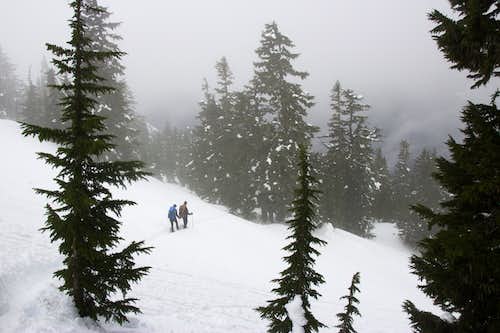 On our way back to the trail head.
The next morning I woke up at 6:30am to catch the sunrise. The fire had gone out and the propane heater had run out of gas. Inside it was 32 degrees. I stepped outside and was surprised by a dense fog. I couldn't see more than twenty feet. The forecast had predicted clear skies until Sunday night, with low winds and no snow. At least it wasn't snowing or windy. I crawled back into my sleeping bag a little disappointed.

We left the lookout around 9am. It was around 20 degrees out and very foggy. We followed our tracks to find our way back. A few times the wind had covered our tracks, so we had to pull out the gps to find our way. The visibility dropped to 10 ft. at times, making it impossible to navigate without our trail or the gps. After descending about 1000 ft. the fog cleared a little. The hike down was tiring, but much faster than the hike up. By the end we were all exhausted. I had a few blisters and welts on my feet from the snow shoes, but it wasn't too painful.

It took us 6 and a half hours to get back. We hiked up 5,700 ft. and traveled 18 miles round trip.  The views and the lookout were well worth the effort!

Great pictures of a Washington Classic!!

Re: Great pictures of a Washington Classic!!

Thanks, it was an incredible hike!

Your photos are splendid and the place looks gorgeous! It would be nice to get up there in good conditions. Thanks for posting.