This truly was a beautiful hike and one could say it was like being in awesome wonders. It started when Joanna invited me, and as always I had to accept the offer. Another guy named Don came which I hear has some climbing experience, the weather was finally good so it looked like I was in for a good hike. Fortunately it was better than I expected... 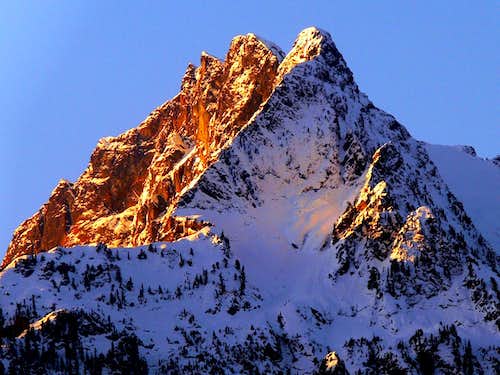 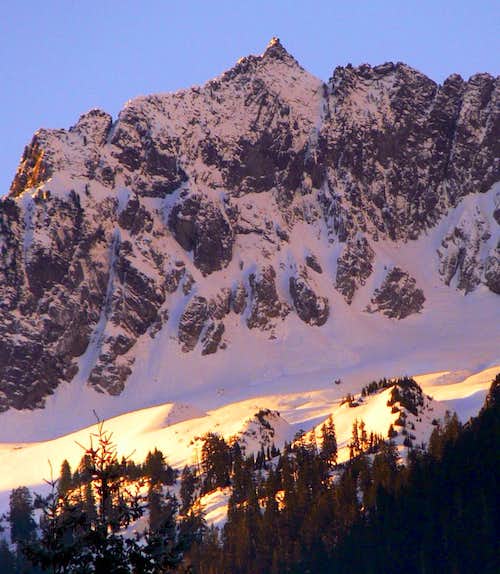 Mount Bullon During Sunrise
I woke up at 6:00 a.m. to get my last second stuff together and eat breakfast, and from there Joanna picked me up and we headed for Hidden Lake Peaks. On the way I took a few photos of the mountains as I always do which I call my "Drive by Shootings" of photos that is. At Darrington Don was generous and bought me some chocolate milk which was 800 calories in just a few minutes, don't worry I would be using the energy on the hike. We took a different route to the Cascade Valley by taking a side road before getting to Rockport. Once we were in the Cascade Valley I had to get a few shots of Eldorado Peak. After this Don took over for driving up the road to the trailhead because the road up is quite steep. To our surprise there was hardly any snow on the road and it was actually more icy on I-5 than it was way up at 2,800 feet. 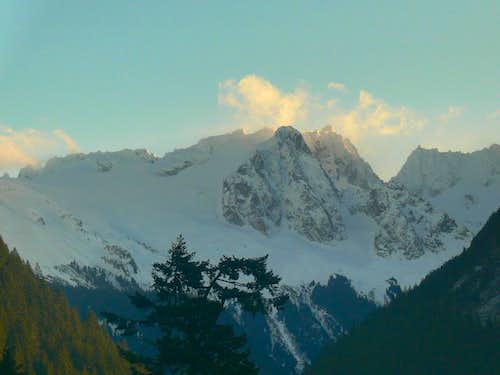 Eldorado Peak in the Morning 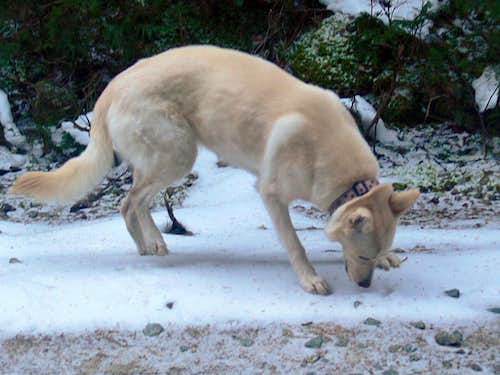 Holly Checking out the Place
We started out on the ridge rather than at the main trailhead because we wanted to try a new route on the mountain. I had my ice axe out right away because not only do I very much like it, but it helps on steep slopes of dirt. We paced very well going up, not saying we were going slow, but at a good pace. Eventually we hit snow which to me is a good sign, the mountains without snow is not as exciting. Holly (the dog) very much liked the snow and would sometimes play in it. We were in the trees a lot longer than I had expected, but when ever we got a view through the trees it was breath taking. There was apart of the hike that had a rather interesting look to it, there were snow swirls all around and snow bumps that covered the rocks, and it started to feel more and more like I was on a glacier, there were even mini crevasses (perhaps only a few feet deep). After this we were for the most part above the trees and the views really started to come in. 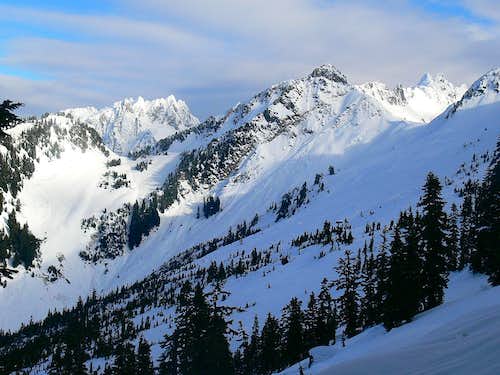 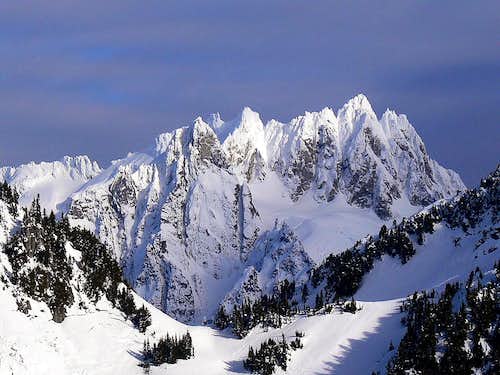 Dorado Needle
As I looked over at Dorado Needle, the Traid, and many others I said to myself "What a beautiful world" because it felt like I was in a mountainous paradise, it was this place that reminded me why I loved the Cascade Valley so much. The thin clouds coming in created snow shadows over the mountains and added much to the beauty of the place. As I looked North the clear weather looked just wonderful, but as I looked to the South I could see that there was bad weather coming in. 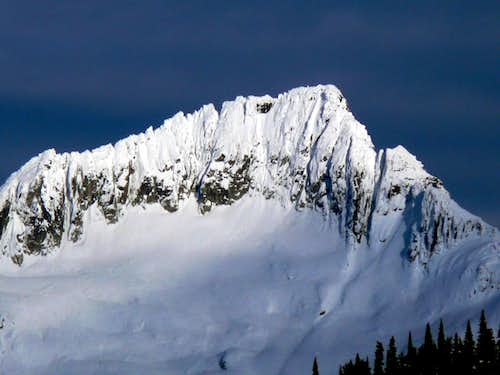 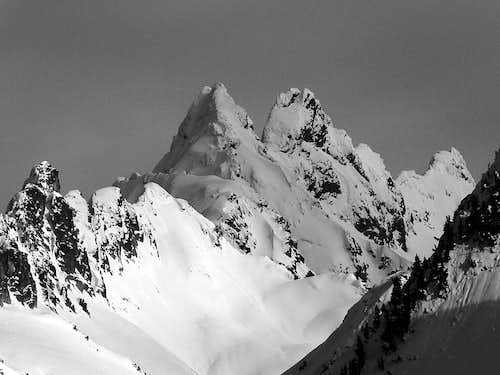 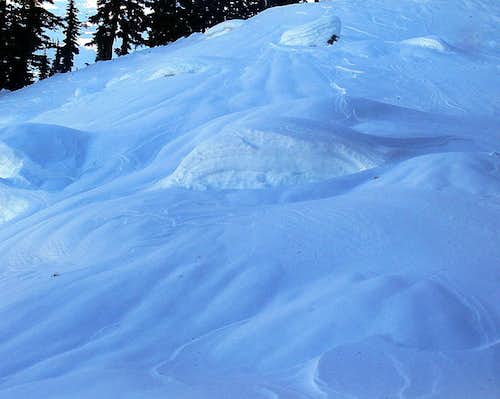 Wind Blown Snow
The sun was bright so I had to get out my sun glasses and the atmosphere of the place became more and more mountainous with every step. When walking at times it would sound like styrofoam, and at others it would be a crunch. Fortunately we decided against carrying up the snowshoes and the crampons we had were not necessary although a few spots had a little ice under the snow. I could see the weather taking a spin, from thin clouds coming over to making the sun look like the moon. I gradually became more and more tired as we were going up. I saw above what looked like a human figure on the summit, but I did not think much until a little later they moved and they were actually a skier. 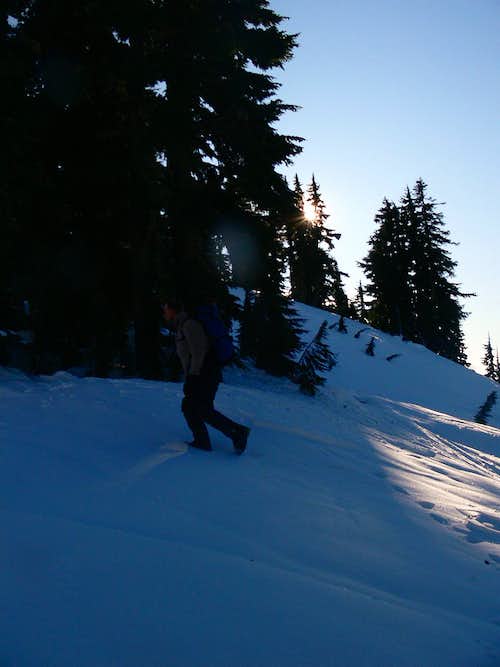 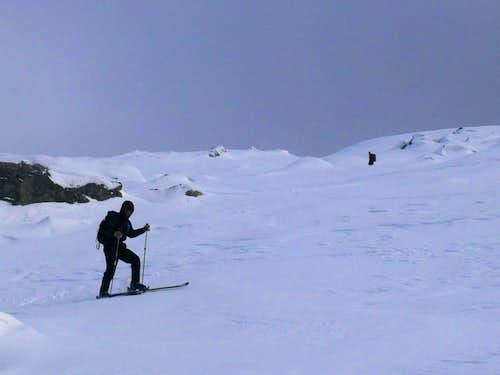 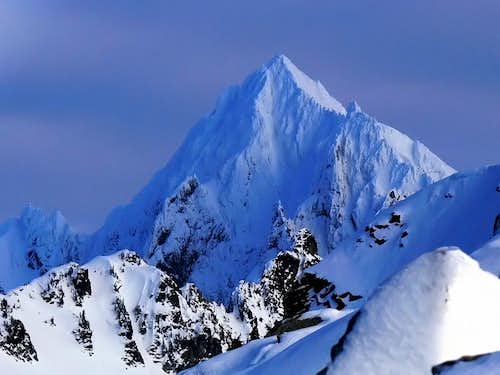 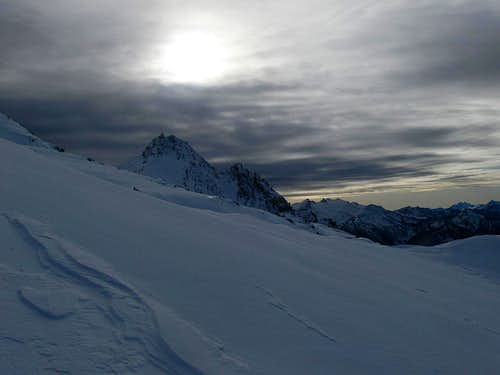 Cloud Shadowing
The first sign of trouble came in when Holly was whining a little from the cold, which had the group worried, her paws were cold which Joanna was wondering about turning around. At this point the summit was not far, and we knew if we just carried on just a little longer we would have a few minute summit, and then hurry down. Getting to the summit for me was a bit difficult. As we were heading up the last 400 or so feet my feet became more and more cold as well as my hands. I was a bit hungry, I had a quick snack but I would have to wait for the summit for real food. The wind kicked up and the temperatures steadily declined which also weakened me a bit. Don was nice enough to break in the trail for the last 400 feet, and soon we were on the summit. 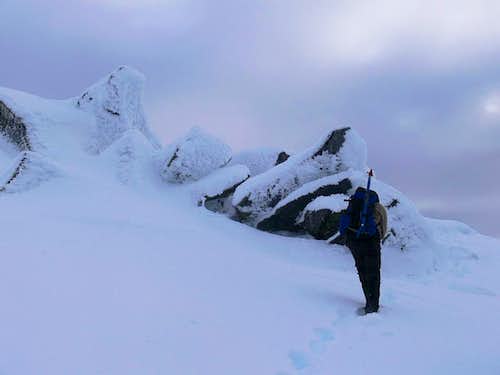 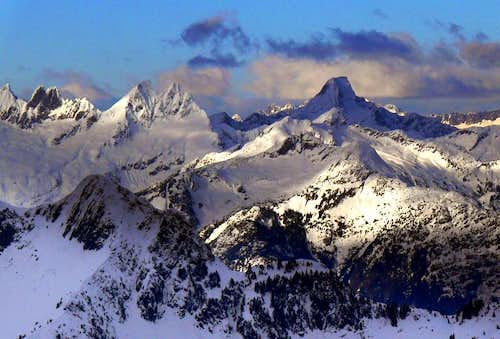 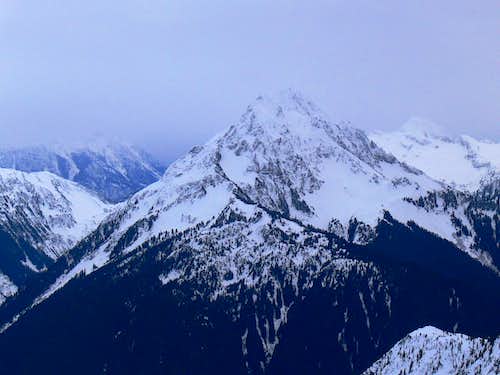 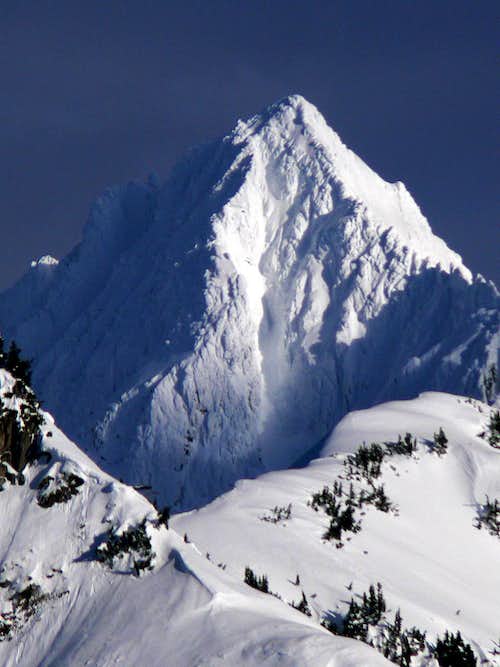 Eldorado Peak
I put on all my layers as fast I could, ate, drank what I could (my water was literally beginning to freeze) and took as many photos as I could until my hands were too cold, and from there most of photography interest for the rest of the trip was lost except for a few times. As I was eating I noticed blood on my burrito which worried me, and then more as I took another bite, Fortunately it was just a bloody lip. The view had a nice winter look to it, but I was too cold to put a whole lot of thought into it. After just a few minutes we immediately start our descent. Any time I ever tried to glissade Holly would try to bite me (as she usually does) which made glissading a little harder, but I find it entertaining and perhaps was a sign that Holly was feeling good. Mean while Joanna gets a bad cramp which she says was from the cold. We had to slow our pace and not long after her I start to get a bit of a cramp in my legs which for me was probably caused by dehydration. Then it began to snow a little, but by this point I was more concerned with getting down. 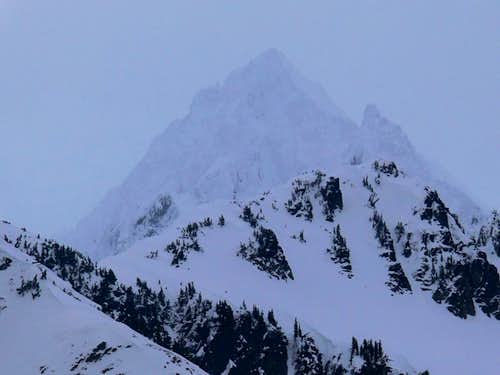 Eldorado Peak Disappearing
After getting down a ways I got more feeling back into my hands and feet which was nice. Joanna and me had some nice talk and the temperatures felt "warmer" and as always it feels like less time going down than up, although a few places felt longer. It ended up being another fun adventure. Great work team!

I know this might sound lame, but I had a hard time photographing the last few steps, the cold made it harder to get. Plus numb hands never helps.

Very nice TR and the lighting on some of those photos is spectacular!
Well done

Matt, wasn't I the one that told you old tr's are ok? Also take a look at Idiots in the Middle East which is one of the highest rated trip reports on summitpost, it happened during 1994.

Thanks for your comment, the lighting on the mountains were quite amazing!

Re: Eldorado Shots Are Unreal!!

Thanks Greg, it was so real that it felt unreal while I was watching the shadows and mountain light. I wish my camera was not low on power from the cold and such, plus numb fingers and feet don't make it any easier.