During the rainy month of May in Colorado, some friends and I scheduled a quick trip to Utah and decided to take turns selecting hikes.  It was a spur-of-the-moment trip and there was not much time for preparation, so for my selection I turned to the very helpful visitor center in Moab.  My request was for a trail 6 - 10 miles long, preferably with ruins and/or petroglyphs/pictographs.  By the initial reaction I thought that I was asking too much, but my request was certainly delivered.  It was the Hidden Valley Trail, which could be done as a round-trip or car shuttle.  I tried to catch all the directions but knew I would never remember it all, so purchased the Moab South and Moab North Trails Illustrated maps and met my friends for dinner.
Since we had 2 vehicles we chose to do a shuttle trip.  We dropped a vehicle at the Moab Rim 4WD trailhead along Kane Creek Road, then drove back to the Hidden Valley trailhead just a few miles south of Moab.
The initial ascent of 500 feet in half a mile was steep but it was early, cool, and the trail was good.  At that point we encountered the beauty of the Hidden Valley.  We took our time in this section as it was one of the loveliest places we saw on our hiking trip.  Towards the end of the valley the trail ascended, then split into a right and left section.
We had been directed to stay right at the high point in the trail, which we did.  But then the trail appeared to split again.  Once again we chose the right fork.  But we started descending west into a valley and began to get concerned about going the wrong way, as we hadn’t yet seen any ancient works of art. Ready to turn around and go back, I looked up to the left and saw a big gap in the rocks.  I remembered the visitor center employee talking about a gap and some petroglyphs nearby.  To ascend to the gap required some class 3 scrambling, but the reward was worth it as the promised sheep petroglyph was right inside the gap! 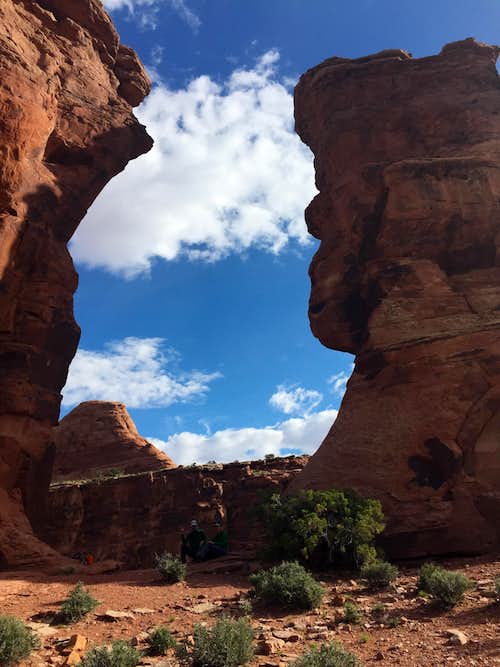 Looking north through the gap on the Hidden Valley trail extension 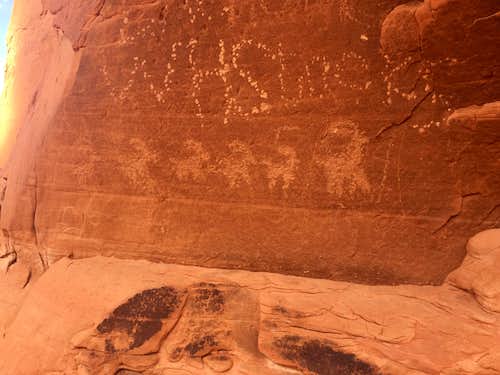 Sheep petroglyph at the gap
We took a break in the cool shade of the gap, crossed through it to the other (south) side of the fin, then headed back east towards the valley high point, admiring many pictographs and petroglyphs along the way.  Later we concluded that this was not actually a part of the Hidden Valley trail, but an extension containing a wonderful assortment of petroglyphs and pictographs. 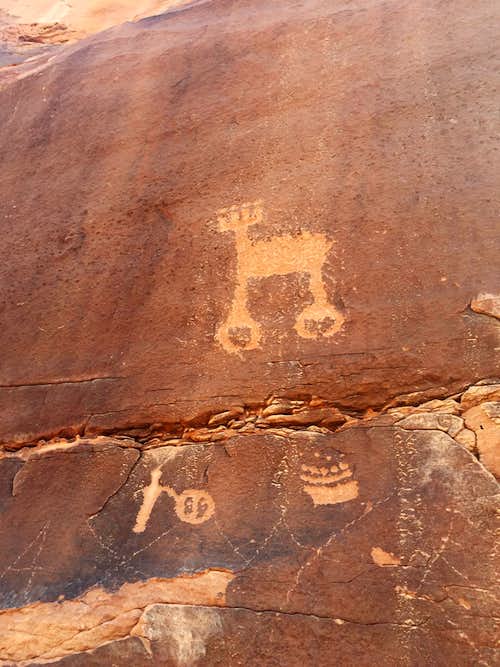 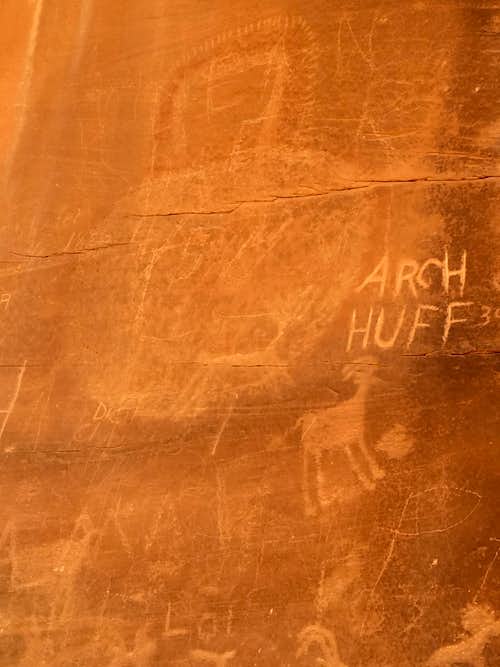 Pictograph of kettle
It is unfortunate that the easy accessibility of these ancient drawings has resulted in the amount of graffiti that is present in this area. 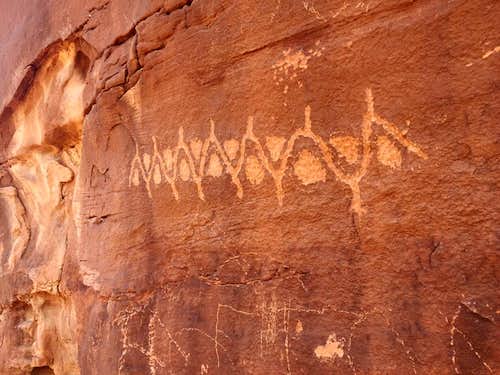 Progressive petroglyphs
Eventually the trail disappeared and we determined that we had to drop down to join the the original extension trail.  Sure enough, cairns were set in several places so we each chose the route that worked best for us.  We now re-traced our steps to the point where we had taken the 2nd right turn, and there we headed west along another cliff face.  This face was also peppered with Indian rock art, and we followed the trail downhill, across the wash, and onto the 4WD road.  As we went along we made up names for some of the artwork. 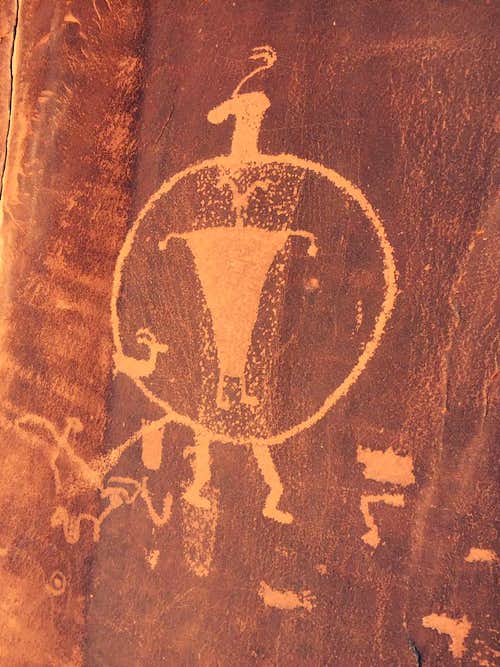 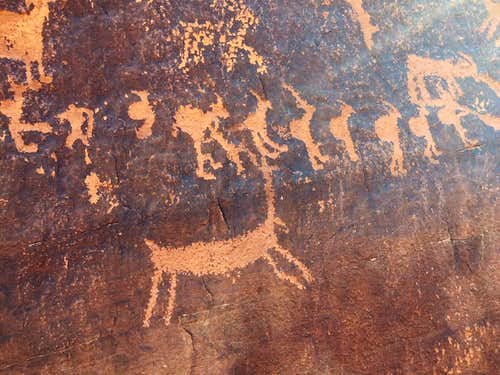 Petroglyph scene
As we meandered down the road, we started to meet with some mountain bike riders who asked about the petroglyphs.  We pointed at the gap and gave directions, but the “art” sections of the trail are not well suited for mountain bike riding, and it wasn’t long before they returned and passed us going back down the trail.
Later we ran into some hikers who were wandering mostly off-trail and told us that there was quite a bit of Indian art in the area, and even some ruins.  Then came the 4-wheelers which were entertaining to watch for a few minutes as they bashed their rear bumpers on a big drop-off in the trail.
For the final descent, we followed the 4WD scrapes and oil stains along the trail and arrived at our shuttled vehicle.

I attached this trip report to my Moab Hikes Outside the Parks page, if you don't mind.