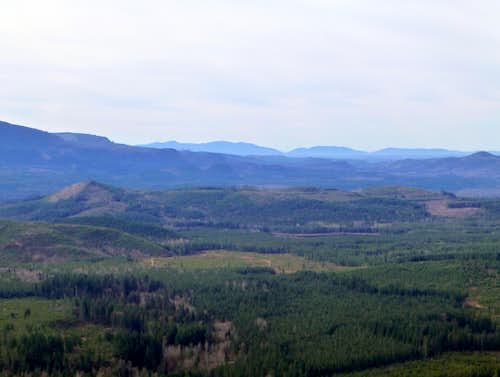 'Highwire' from 'Baby Blue' (3.5 miles to the north). East summit on the left, west summit on the right. Kellogg Lake is barely visible at the base.
Well, I'm sinking to a new low, both literally and figuratively, with this one. I never would have believed I'd be making a page for a 1290' high point, but unfortunately, I just can't help myself. While driving along Highway 2 several months ago, I noticed that 'Highwire', a high point just northeast of Sultan, had been clearcut in at least two separate locations ('Highwire' is the unofficial name of Haywire Ridge's high point, according to listsofjohn.com). I had been in this area a few times in the past, but was never really blown away by the views. A quick survey up the Sultan Basin Road gave me the idea that the view situation had improved, and my assumptions would prove to be correct. 'Highwire' is now what I would consider to be an easy, family-friendly road walk (or mountain bike ride) that can be enjoyed by you, your spouse, your kids, and your dog nearly year-round. 'Highwire' probably has the highest view-to-effort ratio of any high point in the area - this assumes, of course, you are not considering 'driveups' such as Mount Erie. In exchange for a simple, one mile road walk and 250' of elevation gain, one can be treated to 360 degree views, with a particularly good look at the Skykomish River Vally and vicinity. 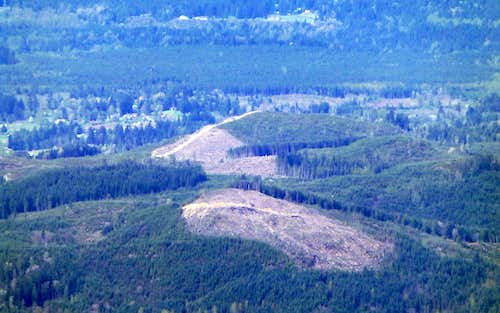 Follow US2 to the town of Sultan. Just east of town, turn north onto Sultan Basin Road. This road will be 1.1 miles past the Sultan River bridge if you are traveling eastbound. Drive north for 2.2 miles, where the Sultan Basin Road will make a sharp right turn. After another 0.4 miles, the Sultan Basin Road will make a sharp left turn. Stay straight at this point, onto 112th St. SE, and follow it to a dead end and yellow gate after 0.5 miles (N47 53.780 W121 46.654 Elev. 912').
Parking is limited at this location. Any more than two cars would be a little crowded. If you are here on a weekend and can't find a good spot to park, consider approaching from the Kellogg Lake Road or 132nd St. SE (marked with blue circles on the route map). If you think you may use one of these alternate routes, please print up a map from Google Earth or Google Maps, as the roads are somewhat different from the USGS maps. Either of these optional 'trailheads' will add some distance and elevation gain to the route. Please note that I have not verified the suitability of parking at these locations recently. 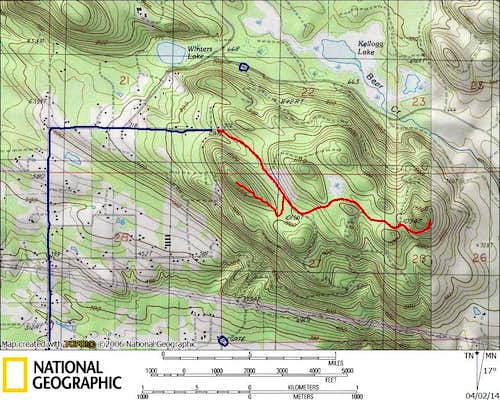 From the yellow gate, follow the 'mainline' for 0.6 miles, at which point you will arrive at a right fork (N47 53.447 W121 46.179). For the west summit, and best views in the area, follow this spur. After a short distance, this spur will split - follow the very obvious right fork to the top of the west summit (1170', 0.4 miles from the 'mainline'). Views are expansive from this point, and views in all directions may be taken in from two or three locations in the immediate vicinity. This point seems like it would be a particularly nice place to watch the sunset on a clear night. 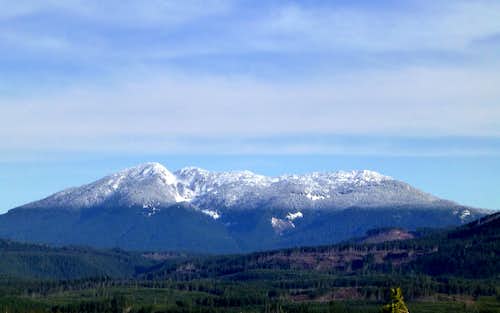 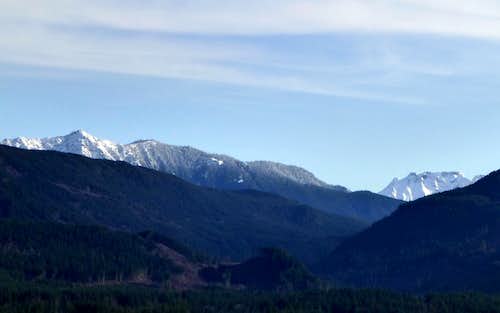 Bald Mountain and Big Four from Highwire's west summit. This view looks up the Olney Creek Valley towards Olney Pass.
For those who need just a little more, an additional one mile road walk (from the mainline) will lead to the higher east summit. Continue southeast on the mainline for 0.2 miles, until reaching a spur leading uphill to the left (N47 53.360 W121 46.050). Follow this spur for 0.7 miles (ignore any minor spurs leading left or right), until reaching a four-way intersection (N47 53.306 W121 45.311). Continue straight ahead on the well defined spur, which will make a short, steep climb up to Highwire's east viewpoint. If you are biking, it is probably easier to lock up the bike and walk from the four-way intersection, as the road is steep and rocky from this point. The east viewpoint also offers expansive views, looking down into the Olney Creek Valley, and up the Skykomish Valley as far as Mount Daniel and Mount Hinman. 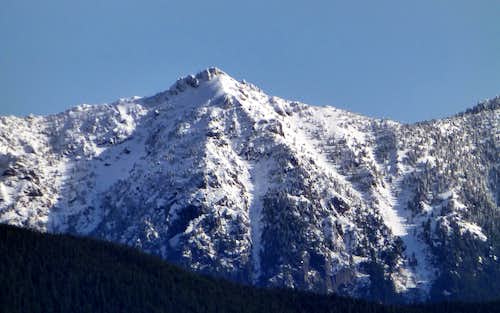 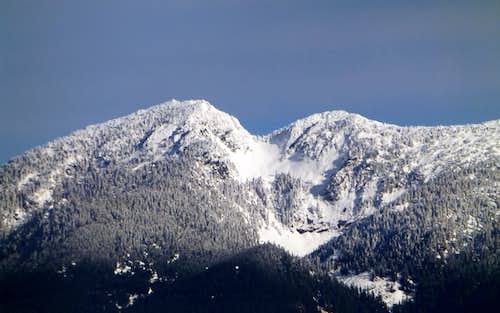 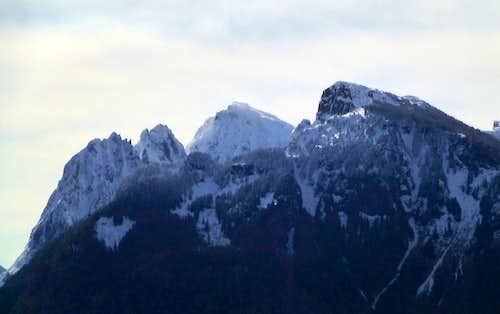 Mount Index and Mount Persis from Highwire's east summit. As is suggested by the poor lighting of this photo, Highwire is probably best enjoyed in the afternoons and evenings, to take advantage of the sun illuminating the mountains to the east.
Highwire also has a little something to offer the prominence peakbagger - the east summit has a fairly respectable 620' of prominence. To get to the true summit, simply scramble uphill to the west from the east viewpoint about 200'. The summit does not add a lot more to the view, but it does allow you to take a look down at Kellogg Lake. 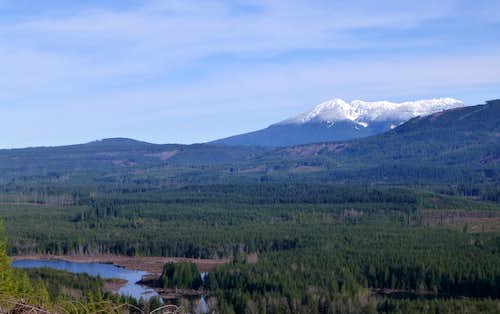 A parking pass is not required for this 'trailhead'. A sign is posted at the gate with the standard private timber company rules about walk-in use. In other words, don't do stupid things while you're up there, and we'll be able to keep visiting this area.

Any time you want!

Camping is not allowed in this area.