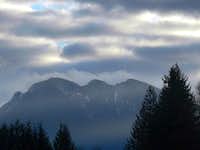 Mount Zekes from Gold Bar
Zekes Peak is not for the faint of heart, for myself it took me 6 attempts to successfully climb this mountain. This is probably one of the hardest peaks below 5,000 feet in Snohomish County. It's not only a full day trip but also has many obstacles, much elevation gain, and bush whacking. Like many mountains, the season plays a big roll in the conditions and difficulty of the mountain. This peak was named after the owner of the Zeke's Burger place along highway 2, and was a pioneer of the area. If your up for the challenge of climbing this mountain, you are rewarded with good views of the Wild Sky Wilderness, Mount Index, Mountain Loop Highway, and views out West. There is some moderate class 3 scrambling in the gully below the summit ridge that has loose rocks. But as long as you don't mind these things, than this peak can be a bit of fun adventure. 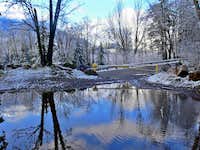 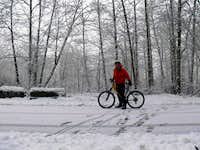 Getting There on a Bike
View Exact Trailhead from google maps to see where the trailhead is. Unfortunately the automatic directions to this place is not supported.

From Seattle: Head east onto the Highway 520 bridge which goes over Lake Washington. Then take a left (North) onto I-405 until your at Bothell. Then take a right onto Highway 522 (exit 23) which goes to Monroe. In Monroe take a right onto the ramp that takes you to highway 2. On highway 2 head east for about 16 miles. After you pass the city of Gold Bar be on the lookout for a road called Reiter Road which will be on your left. In less than a mile the road will curve, be sure to take a right which will stay on Reiter Road. The trailhead is a little over a mile from the fork in the road. After passing a very large parking lot on your left side the road starts to curve, this is where the trailhead is. You will see a yellow gate blocking off the road where there is a small pull out with enough room to park a few cars.

From Everett: Pretty much the Same Directions as above except for access to Monroe which you would head East onto Highway 2 and then follow the directions above (Directions to Seattle) after Monroe.

From Leavenworth: Drive West along Highway 2 over Stevens Pass towards the city of Index. After passing the city of Index you cross over two bridges, right after the second bridge you take a right turn onto Reiter Road. In less than a mile the road will curve, be sure to take a right which will stay on Reiter Road. The trailhead is a little over a mile from the fork in the road. After passing a very large parking lot on your left side the road starts to curve, this is where the trailhead is. You will see a yellow gate blocking off the road where there is a small pull out with enough room to park a few cars.

Keep in mind that there is no real standard route considering that this mountain is almost never climbed. It's probably only seen a dozen or so ascents even though it is fairly close to the city of Gold Bar.

At the trailhead you start out by taking the road on the left. In about one third of a mile the road goes under a large series of power lines. Once you get back in the woods be sure to continue going straight (left) towards May Creek. The road ends just before the creek, but is easy to get to May Creek by hiking down to it. It is recommended to follow the creek left to find a smaller log which can be used to cross the creek. The other alternative is to go right near the large fallen over tree and figure out a crossing just below the tree. Once your on the other side you should go about 50-70 feet to the right (from the large log that doesn't quite go all the way across) and climb over a fallen over tree which will lead you to another abandoned road. 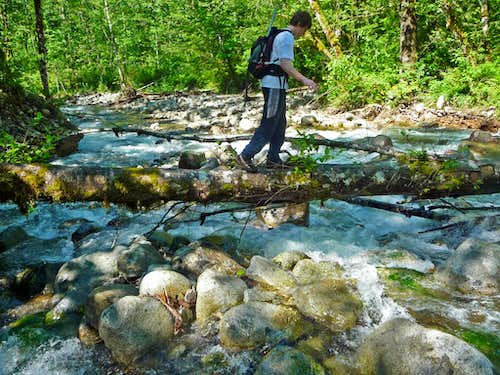 Crossing May Creek using the Large Log
The abandoned road goes on for miles crossing over a few smaller creeks and switching back towards May Creek. Eventually the road reaches a fork which you curve left up hill, a few minutes later you reach another fork in the road which you then curve right. Be sure not to miss this turn! From here you take this road all the way to the end of it which goes right back near upper May Creek. 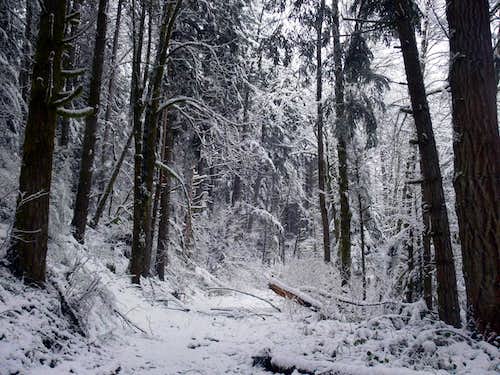 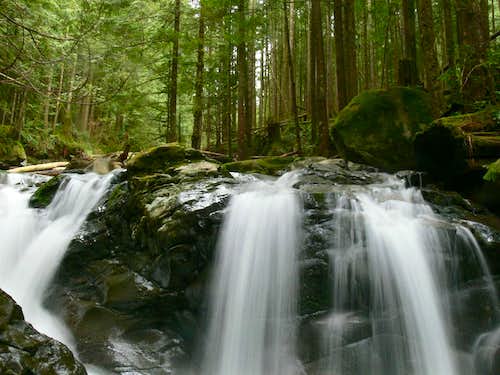 Waterfall in the Woods
The road goes right into a creek bed, follow this creek bed until it turns down hill towards May Creek. Now the exciting part of the adventure up Zekes Peak. Go slightly left into the woods, hopefully you find a cheap slight ridge at times to help keep you out of the bushes as much as possible. Sometimes there are flags with hardly any bushes and at others it can be some of the most obnoxious terrain with fallen over trees though deep snow creating snow traps that make it a bit dangerous, strenuous, and get you soaking wet by the time your out of the "traps". 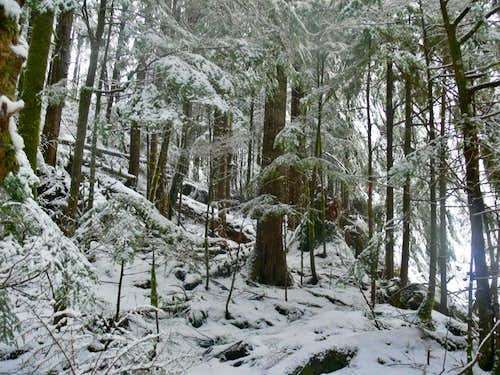 Finally a "Pathway"
This part is a bit complicated to explain exactly how one would traverse the bottom of Zekes Peak, use the topographic map in the bottom of this page to help give you a good idea of where you need to go. Stay low on the mountain to avoid rotten trees that you end up breaking though. Eventually you come across a boulder field that provides some relief from the bushy terrain. Scramble up the mossy cover boulders as far as it goes and then traverse in a similar direction that you climbed up the boulder field. The woods may get steeper as you go up, be sure that your heading right (North) and head east if things start getting too steep. A while later you should come across a long gully that goes a ways up Zekes. 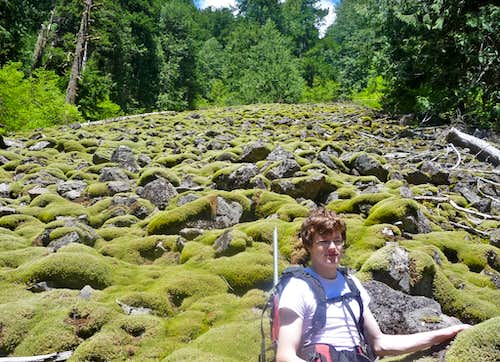 The gully starts out as class 2 on semi loose rock (in early season snow of course). It shoots right up the mountain which you gain elevation in speedy time but is depended on how well you do with scrambling. In the middle of the gully there is a spot that is class 4 that can either be scrambled if you feel up to it, or you can go to the right which goes around it. The round about route has a lot of slide alder making it a bit time consuming and a bit obnoxious. As you get near the top of the gully the terrain changes to class 3 with looser rock making one have to take a bit more care with there footing and hand placements. But it's no problem for experienced mountaineers.


After exiting the gully there is some mild scrambling and a small amount of route finding to get to the summit ridge. Once your on the summit ridge, it's a nice walk up all the way to the top. Even within the last 200 feet of the summit one should be careful about the rocks you step on, I nearly broke my leg when stepping on a huge boulder and escaped with only a cut. At first you reach a small false summit, but after a few minutes of walking you arrive on the open summit of Zekes Peak. The summit of this mountain I consider to be quite an accomplishment. 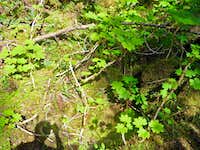 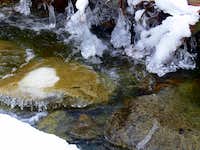 Ice Covered Rocks
There is no permit, nor are there any parking pass at the gate (trailhead). Be sure to tell someone where your going because there is no official place to sign in.

May Creek would be the best place for one to filter water as well as some of the many creeks you encounter along the way towards Zekes Peak. After you encounter the gully there are no more creeks, but snow sticks around until at least July (usually).

There are many places to camp along the road way to Zekes Peak. One near May Creek, another near the end of the road, and many places in between. You could also camp at Lake Isabel, but this is a bit out of the way if your doing the route I mentioned. The upper part of the mountain does not offer much in the way of camping. 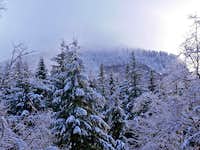 Fog over the Mountain 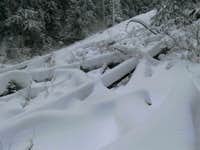 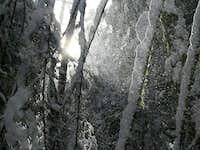 Snow Falling in the Woods 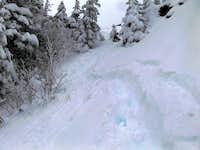 Deep Snow during February
This mountain is pretty much do able anytime of the year, but is probably best to climb it between the months of April and June.

Winter:
During the winter months one has to deal with deep snow and the possibility of falling into snow like traps in the woods. May Creek often has icy covered rocks making for a dangerous crossing over the creek if present. Zekes Peak does have the benefit of having the "Standard Route" on a South Face that is low elevation making it a safer option when avalanche danger is some what high. But on another note, don't attempt this peak when avalanche danger is very high, the gully can build up quite a deal of snow.

Spring:
Early Spring tends to have high water flow in May Creek creating a potential hazard/difficulty. If the log lower down the creek is still there, then it might be an easy crossing. Also weather tends to be not so ideal in early to mid Spring depending on what kind of year it is.

Summer:
Just because the snow might be mostly gone does not mean that this is going to be easy. There are many fallen over trees in the woods that are rotten making traveling a bit slower. You want to travel as little as possible in the woods off trail during the summer because of sticker bushes, devils club, bushes, slick slopes with exposure (if off route) and loose rock in the upper gully.

Fall:
Some of the bushes and such may still remain, even when snow falls during the early fall season. Later on the weather is often bad making this perhaps the worst season to climb this mountain in. 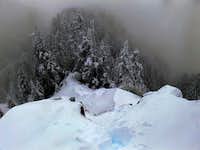 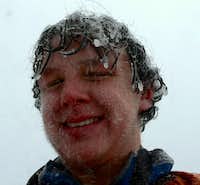 Feeling a Bit Chilled
For weather information be sure to check in with the Noaa Forecast. 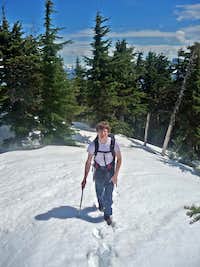 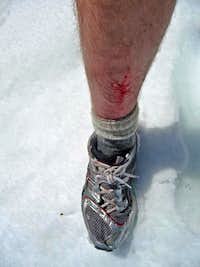 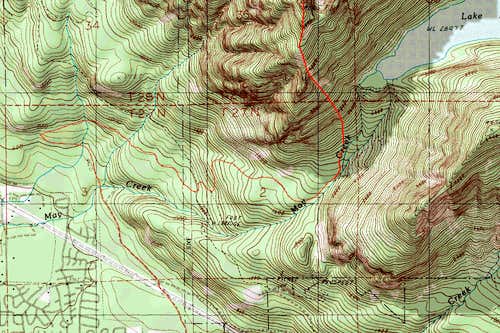