SP Member Beaudaddy85 On The Summit

There are many factors which make Mount Pilchuck one of Washington's favorite and most sought after hiking peaks. Second only to Mount Si, it's estimated that Pilchuck sees 28,000 visitors each year. The number one draw for the mountain is the old fire lookout on the summit, which was constructed in 1918 by the US Forest Service. It was renovated by the Everett Mountaineers in 1977. At the peak use of fire lookouts, there were nearly 700 Washington State, but now there are only a handful remaining. Most were burned by lightning strikes. 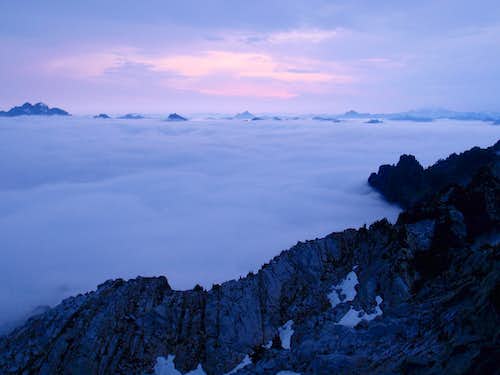 A Sea Of Clouds Below The Summit

The other factor which makes Pilchuck so popular is the easy access. This is one of the closest peaks to Everett and the I-5 corridor. Most summit hikes in the Cascades require hours of arduous elevation gain through seemingly endless forest. Not so with Mount Pilchuck, for the road climbs all the way to 3150 feet. From the parking lot, it's a short 6 miles round- trip, gaining only 2200 feet. Most of the trail is in the open, with views that become more inspiring the higher you climb. 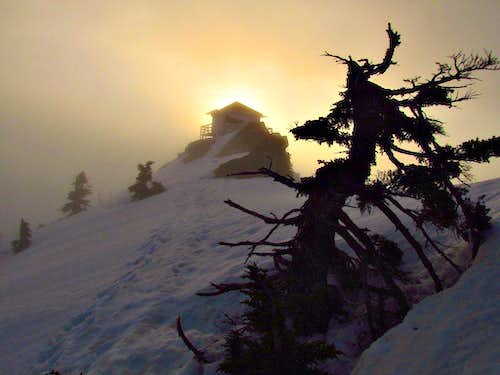 Whether you are a relatively new hiker or you want to introduce someone to the world of hiking in a way which will take hold, Pilchuck is a great starting destination. There are two peaks in this part of western Washington which are likely to induce a love for the outdoors. Mount Pilchuck and Sauk Mountain. What makes these two hikes effective is the small amount of work required to gain rewarding views and an enchanting experience.There are multiple hiking trails on Mount Pilchuck besides the one which goes to the summit. Both the Heather Lake trail and Lake Twentytwo trail, accessed lower on the approach road, see a lot of day use. A sub-peak known as The Eaglet is far less commonly visited. 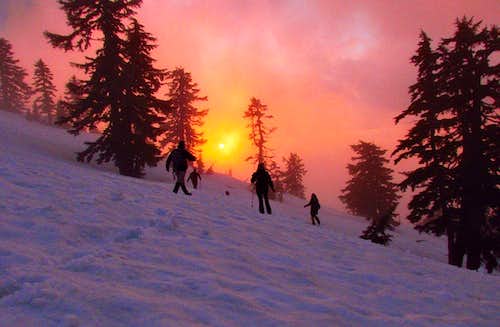 Sunset Lighting Near The Summit

Six miles east of Granite Falls is the second most popular summit hike in Washington State. This mountain is a broad east-west oriented ridge located south of South Fork Stillaguamish River. The north face is the most complex side with three separate ridges radiating down from semi-cliff faces. Between each of these ridges are the sizable lakes, Heather and Twentytwo, the largest lakes on the mountain. Mount Pilchuck has so many lakes that it's difficult to count. The Bathtub Lakes alone contain 16 lakes separate lakes. If you were to count all the lakes on Mount Pilchuck, including small ones, there would be more than 30.

The trail starts out in an old growth forest and switches back through several small talus slopes. The trail rounds the base of Little Pilchuck, onto the north side and climbs to a saddle at 1.5 miles, elevation 4,600 feet. Open granite slabs and cliffs are impressive at this point. The path then crosses the west ridge again to the south side for the final approach. 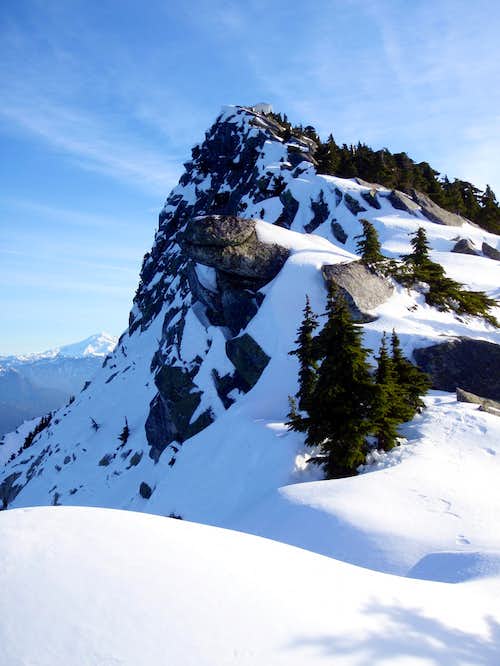 The West Ridge And Lookout In Winter

If you are experienced in scrambling and route-finding, you can follow yellow paint on the ridge crest from 5000 feet to the summit and lookout. This is a really fun alternative but should not be undertaken by those without experience with exposure. The main trail winds another half-mile up the southwest slopes before the summit.You might need to help small children negotiate the last few boulders to the lookout and PLEASE keep an eye on the kids while up there. One of the potentially dangerous weather conditions at Pilchuck is fog. Fog can be a problem at times making visibility poor, it can get a little confusing if you haven't been here before or even if you have. The route where the trail winds through the rocks is marked paw prints (might be worn away now), which kids seem to love. 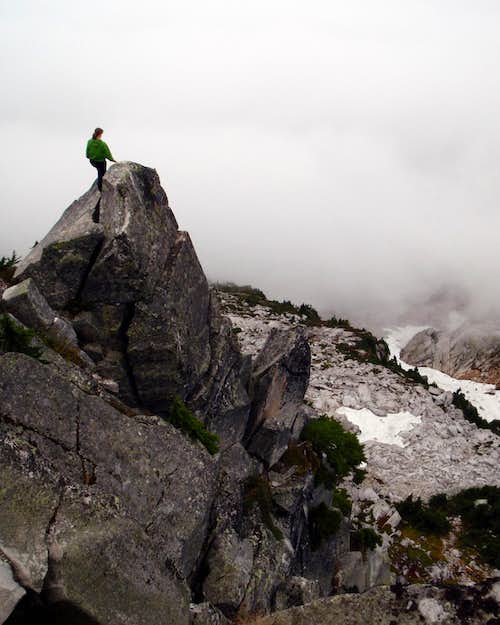 Exposure Below The Lookout

From the summit one can see views of Mount Adams, Mount Rainer, Mount Baker, Three Fingers Mountain, Big Bear, White Chuck, Pugh, Glacier Peak, Sloan Peak, the Seattle skyline, most of Puget Sound, often the Olympic Range, and a lot more.Below cliffs to the north is Frozen Lake, which can be reached on a rough way-trail that begins at a switchback down lower on the trail. Do not descend to the lake from the summit. It's too steep and dangerous. However, experienced hikers can descend a way-trail along the ridge to the east into a neat area of meadows and tarns sometimes referred to as the Poor Man's Enchantments or Twenty Lakes Basin. Another lake to check out while in this area is Heather Lake. Great views of Mount Pilchuck can be seen from this lake. 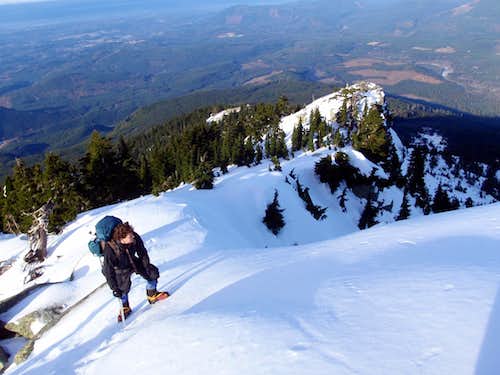 From Seattle, drive 28 miles north on Interstate 5 to exit 194 (City Center/Stevens Pass). Drive six miles east on U.S. Highway 2 to the state Route 9 exit near Snohomish. Follow Route 9 north to state Route 92. Turn right and follow Route 92 eight miles east to Granite Falls. At the end of town, turn left (north) on Mountain Loop Highway. If you go pass the high school you are in the right direction.Drive 13 miles (about one mile past the Verlot Public Service Center) and turn right (south) on Mount Pilchuck Road (Forest Service Road 42). The Pilchuck road is right past the big grey bridge. Drive seven miles to the parking lot at the end of the road.There is plenty of parking available at the trailhead, probably enough for about 200 cars. For those whom are interested, there is also a toilet available at the trailhead, to get you off to a good start. 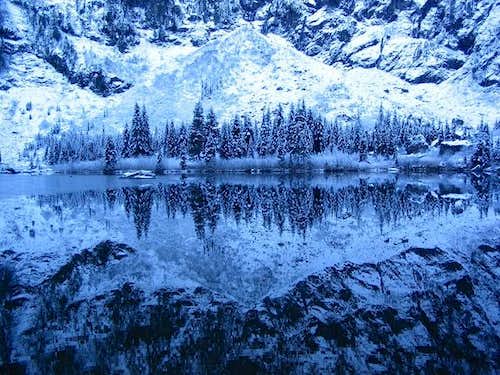 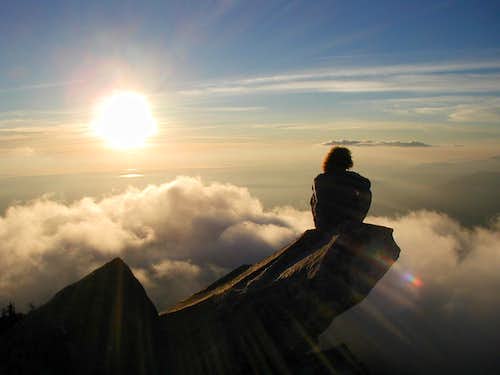 The Famous Summit Rock
Since this hike is located inside Mount Pilchuck State Park, a Recreation Pass is required to park at the trailhead. NW Forest Pass are also sold at REI, the Verlot Public Service Center (they now have a vending machine outside where one can be purchased), and some nearby grocery stores.Road is open in the Winter, but road conditions can get pretty rough, i.e. Potholes/Snow. So proceed with caution. I have personally helped some folks push their car back out of snow which should not have been tested. Sometimes it's better to park and continue with snowshoes. 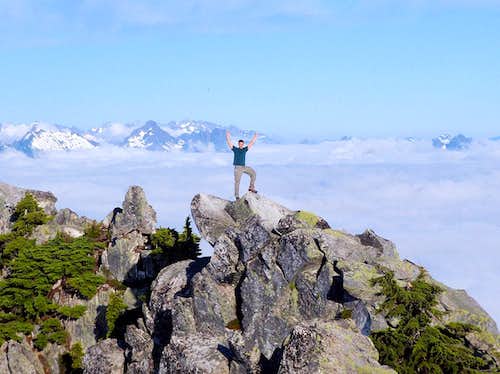 On The Summit With Clouds Below

The best time to climb without snow is late June through early November. There is less people traffic in the Winter time, but if climbing in winter conditions, please have knowledge of climbing in snow and ice. A number of people have died on this mountain in recent years. These accidents are related to unstable snow conditions or icy conditions. At minimum, during the winter, it's suggested to bring snowshoes, ice axe and knowledge of their proper use, including knowledge of danger signs for avalanche conditions.  If planning a climb in winter conditions please check NWAC for current avalanche forecast.  If the rocks around the lookout are wet or icy, exercise caution and avoid exposed areas.
Mount Pilchuck is a real mountain and should not be underestimated.   Please be responsible and climb safely.