This climb begins as a hike from the back of the Rüsselsheimer Hütte, turns into a somewhat exposed scramble up the actual ridge itself, crosses over a small glacier and ends after a final 15 minutes on a steep rocky slope. The summit ("Gipfel") is small but not cramped. It is airy but not so much so that one might be scared of falling off. There is a summit log at the base of the "Gipfelkreuz" (summit cross; very common in Austria). We descended the Normal Route and can honestly say that the West-Ridge is not technically harder, just more exposed. The Normal Route consists of a lot of loose scree, gravel and rock which (in my opinion) is worse than the blocky scramling of the West-Ridge.

Once in Austria's Pitztal, drive until you get to a trailhead near the town of Weißwald. The trailhead is on the left side of the road but the parking is on the right. The Rüsselsheimer Hütte can be reached from the trailhead in about 1:30-2:00 hours. The hut is not large (about 40 spots) so call ahead. The people managing the hut were very friendly. You can call to make reservations or ask questions about the weather (to call from Germany, dial 0043-664-280-8107; from the United States, dial 011-43-664-280-8107).

Note - This route was rated class I because it is actually quite safe and logical. However, there is one class II spot in the second half of the ridge. This route is also very dependant on good weather. Doing this climb on wet rocks is certainly possible but it would be much, much more difficult.

1. Leave from behind the hut on an obvious trail heading back towards the mountain. After about 5-10 minutes, you will reach a sign that says "Hohe Geige Westgrat" (West-Ridge) which will direct you to head left on an good trail. If you do not go left at this point you will be taking the Normal Route. 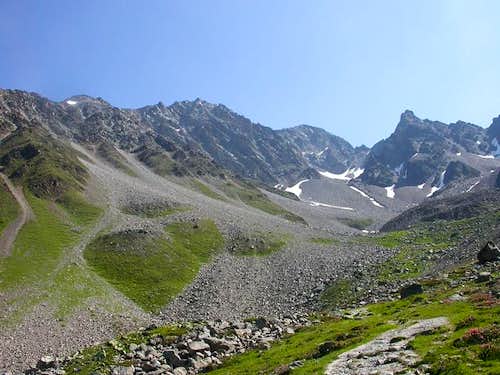 2. Once on the trail, the hut will be on your left and the mountain on your right. Continue until you reach the viewpoint known as "Gawinten" at 2549m. We had been hiking at an easy pace for less than an hour when we got here. There will be a cross and a wonderful view of the Pitztal. You should put on your helmet here and pack up your trekking poles.

3. The West-Ridge starts just behind Gawinten and is gradual at first. It gets steeper as you move over blocks that offer good holds but which can be unstable. Make sure the rocks won't move before you put all your weight on them. Half way up the ridge you will reach a flat section where people seemed to stop for a break. We reached this spot after about two hours of total climbing from the hut. After this level section, you will climb steeper rocks. When you reach the most exposed section, just stay to the right of the ridge (without going too low) to avoid any real trouble.

4. There are stones piled up (cairns) which the Austrians call "Steinmandl" or "Steinmännchen." They show the route along with some red spots that make finding the proper direction quite easy. As you near the top of the ridge you will need to rejoin the Normal Route by dropping down and to the right (if the ridge becomes too difficult, you might have missed the spot where you needed to cross over on the right). There are two spots on this traverse which are secured by chains fixed in the wall. I did not need to use these chains but they would have been nice had the rocks been wet...

5. Once back on the Normal Route, you will zig-zag up some scree to the rim of a mini-glacier. We left our packs here, crossed the right-hand side of the glacier using our trekking poles and scrambled the last 15 minutes up loose talus and rock to the beautiful summit. Out total time from the hut was 3:45 minutes including breaks. The view of the Ötztal and Pitztal is amazing.

The relative ease of reaching the huts means that many day hikers are in the high mountains. Whole families, old people and sandal-wearing tourists visit the huts of the Alps. Some of these people decide to climb higher and even reach high summits with no equipment at all. When we climbed, we saw one man in running shoes and a couple in tennis outfits with sweaters tied around their waists. This is their decision. Being used to the solitude of the North Cascades, we actually packed for the worst case scenario. This means we took all the ten-essentials and more than enough warm, water-proof clothing. Even thought the weather was perfect, we planned for a thunderstorm and a night on the mountain. We did not take our crampons or ice axes as there was little or no snow on the mountain at the end of July. We did not take a rope as there were very few spots where one might need a belay. The route is all scrambling and no true rock climbing. However, this is not a "via ferrata" like so many other alpine routes, so be careful, there is almost nowhere to clip in.

Helmet - No one else on the whole mountain wore a helmet. Yet I would never climb a route like this without one. Rocks, scree and talus rolled constantly down the ridge and slopes during the 7 hours we were out on the mountain. A toaster-sized rock bounced past the head of an Austrian on the descent and his best attempt at ducking was at best pro forma. It was pure luck that he wasn't brained on the spot.

Gloves - There is so much hands-on scrambling on the West-Ridge that climbing with gloves was always preferable to climbing without. As there are no truly vertical rock climbing pitches, I wore my gloves the whole time. My climbing partner took his off and later fell into the rocks and cut his hand badly.

Trekking Poles - The descent via the Normal Route ends with about 1 hour of hiking on gravel and scree. It was very nice to have trekking poles.

Here are some of the best pictures of the route that are on the internet. They were taken by Philip Hultzsch while he was climbing the Hohe Geige. Many of these pictures are used here on SummitPost.org with his permission.

Here is another good climbing report (in German) with more pictures as well.

Here is the homepage of the hut - Rüsselsheimer Hütte (in German)