Hohe Geige is the highest mountain in the Geigenkamm, a long ridge in the northwestern part of the Ötztal region. The views are outstanding, both from the summit and along the various routes.

Panoramic view towards the east from the south ridge just below the summit, which is to the left.
The prominent peak on the right is the Silberschneide, a 3343m high subsidiary to the southeast.
Being the highest, the mountain still has a few small glaciers. While mainly covering the upper northwest, northeast and east sides, there is also a small remnant in a bowl high on the southwest. As if to emphasize the melting process, a small glacial lake has formed at the southwestern edge of this bowl.

There are several routes to the summit, but, despite its name, the normal route is not always the best one: depending on the route conditions, especially the amount of snow on the normal route, the west ridge may well be safer.

The normal route is 'only' steep and exposed hiking, with the occasional use of hands to negotiate some boulders. No glaciers have to be crossed. Some of the rock is loose, and to avoid rockfall danger, it's best to stay close together. However, the main potential problem is that, even well into summer, high up on the route a couple of very steep snow fields may cover the trail and need to be traversed. In these conditions, the normal route is more dangerous than the west ridge.

In comparison, the west ridge requires a few climbing moves (UIAA grade I/II), but the rock quality is fine. Being on the ridge, there is no rockfall danger. It is slightly more exposed. There may be some snow on the ridge early in the summer, but normally not on the steep parts. In conclusion, if you can deal with the exposure and are not averse to a bit of scrambling, you'll probably like the west ridge better. You can always follow the normal route on the descent to compare the two for yourself. That's what I did. 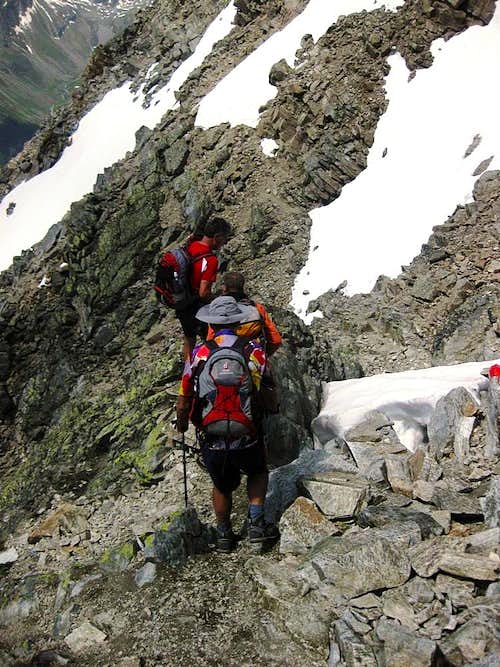 Exposure on the normal route 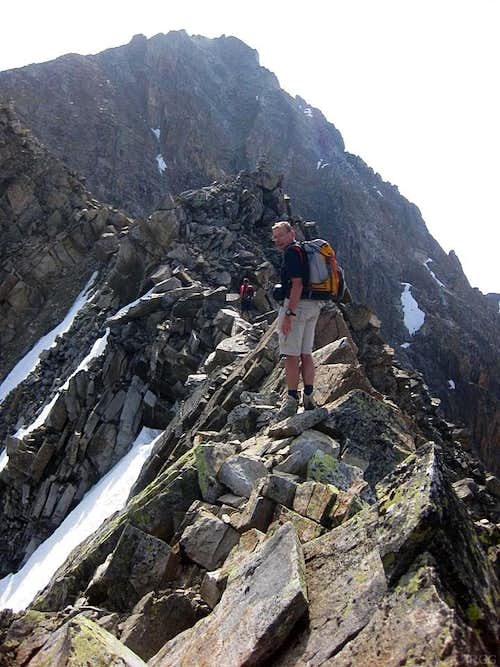 Exposure on the west ridge

The road into the valley is a dead end, and the valley entrance lies in the north, just south of the town of Imst. Plangeros can be reached by public bus, Imst by train. To be precise, the train station lies south of Imst, right at the entrance of the Pitztal valley.

OSM Route map, centered on the junction of the normal route and west ridge route to the Hohe Geige 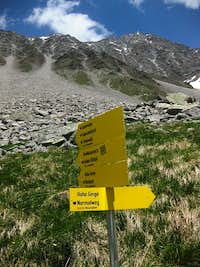 If you see this glacial lake from this close, you've just taken a wrong turn, and are on your way to the Weißmaurachjoch
From the Rüsselsheimer Hütte (2323m), follow the good trail to the east, ascending gradually. About 500m from the refuge you'll reach a junction (46.9931°N / 10.8931°E): a side trail veers off sharply to the right, first to a glacial lake and then to the Weißmaurachjoch. You can't see the lake from the junction, but it will come in to view when you look back down from much higher on the normal route, and serves as an excellent orientation point on the way down. But for now, continue on the main trail, heading east.

About 200m further is another junction. The clearer trail, turning left towards the north, leads to the base of the west ridge, but the normal route continues to the east at this point. If you can't read a map, a hard to miss sign post makes this clear.

The west ridge, seen from just east of the second junction. Instead, the normal route follows the islands of dark green on the right, then winds its way up the steep rocky rubble to the high saddle. Although it doesn't appear so from here, from that saddle it's easier again.
Continue east by northeast along the trail in the now somewhat smaller valley, still ascending gradually. The trail makes a slow turn to the north, and, after traversing a scree slope, reaches a green ridge. By now you're approaching the 2800m mark. 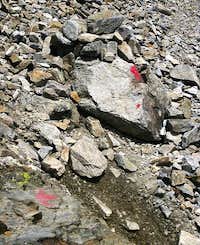 Clear route markers -
if there is no snow 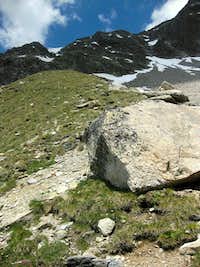 At the base of the green ridge 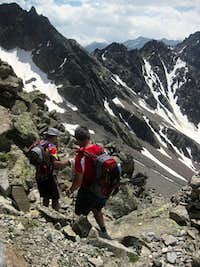 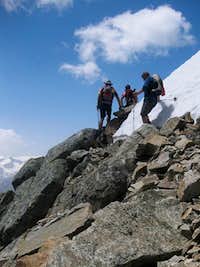 High on the normal route
The terrain gets somewhat steeper now, and the trail sidles up the green ridge, due north, to reach the base of the rough south face. If there is no snow on the trail, you can see the path, except where you have to scramble a bit. And then there are plenty of red paint splashes marking the route.

Occasionally you'll need to negotiate a few boulders or a small rock step. Mostly it's fine, but be wary of loose rocks. Higher up, it gets quite steep. The trail solves this by traversing, but there are a few gullies to cross, and if these are still filled with snow, you'll have to traverse a very steep snow field. For less experienced hikers, it's advisable to tighten a rope across, because slipping will have very serious consequences. 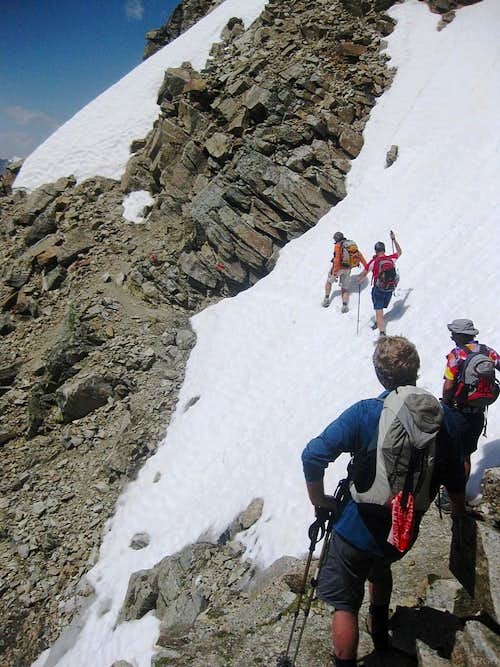 Crossing this snow field is not for the fainthearted. It's too steep and not soft enough to have a fair chance at self arrest. In fact, while these hikers only had hiking poles, I had an ice axe.
If there is someone in your party that does not have enough experience in this type of terrain, it's a good precaution to bring a length of rope on this route if there is snow. You'll pass the Rüsselsheimer Hütte on your way up, and the people there can tell you about the route conditions. 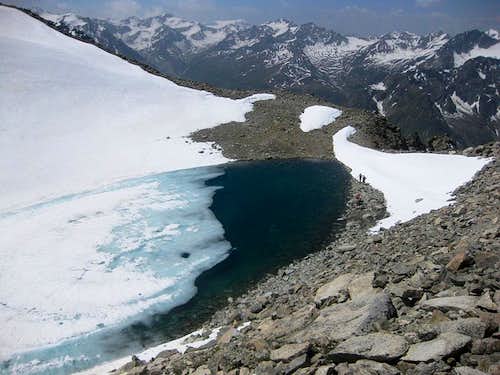 Hikers at the small glacial lake as seen while descending the boulder slope southwest of the summit. To descend the normal route, go around, then slightly up the ridge to the left and then start the descent (47.002°N / 10.905°E). 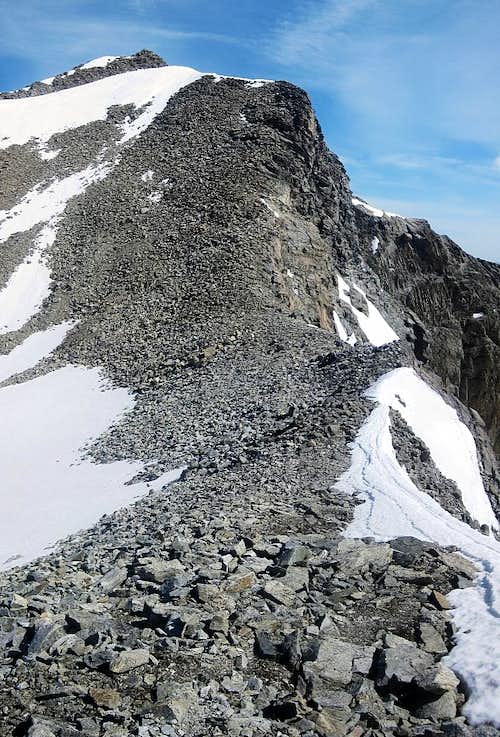 The final bit to the summit, along the south ridge - see that tiny cross up there?
At just over 3200m, the route reaches the crest of the east ridge (47.002°N / 10.905°E) and there are no more serious difficulties from there.

At this point you can finally see the summit, due northeast. A snow and ice filled bowl with a small glacial lake lies ahead, between you and the summit, and unless its frozen, you have to go around it. Consequently, there are two ways to continue from here: The slightly longer but easier route goes to the right, following the western ridge and eventually turning left to the summit. The final bit is on the south ridge.

Alternatively, skirt the lake on the left and then scramble your way up large boulders to the summit. 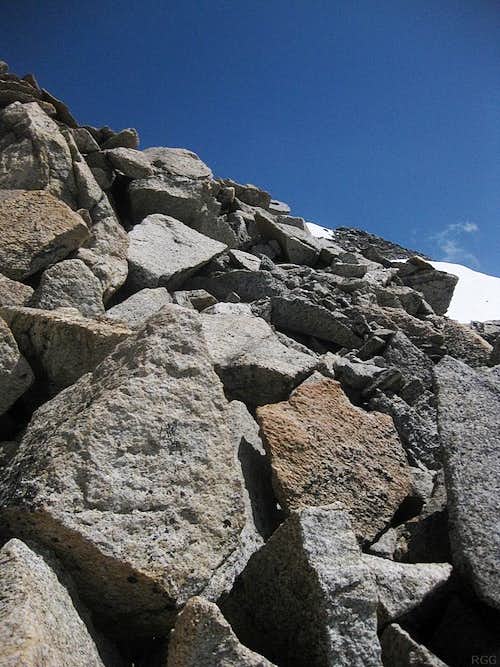 It's easy to overlook the place where the normal route and the west ridge join. I had ascended the west ridge, and didn't notice it. When going down, the only reason I saw it was that there were a few others descending right in front of me. If you look closely, you can see them. To avoid rockfall danger, we descended together from here.

See that glacial lake down there? The descent route passes not far to its right. It's a fine orientation point, and you can see it all the way down from here.
From the Rüsselsheimer Hütte to the summit takes 3 to 4 hours. With snow on the route, you need to be careful on the descent and it won't be all that much faster. If you start very early, you can make it from Plangeros and back in a long day, but I recommend spending a night at the refuge before the climb: you'll get somewhat used to the thin air, and the food is excellent!

Sturdy footwear is essential. With a lot of soft snow, gaiters may be useful.

Unless all members in the party are experienced in alpine terrain, bringing a length of rope is not a bad precaution when there is snow on the route. I brought my ice axe and plunged it deep into the snow for added security while traversing the steep snow fields. Hiking poles can be useful as well. 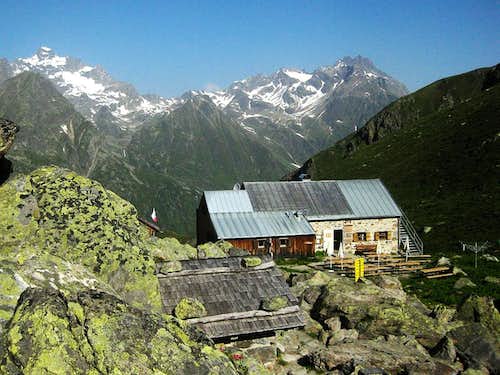