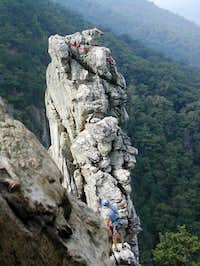 Eric Horst’s Rock Climbing Maryland, Virginia, and West Virginia lists Humphrey’s Head as one of the routes on the South Peak, but because it is a pinnacle, albeit a small one, with a few different route options on it, it is more appropriate to submit it here as a mountain/rock page.

The South Peak of Seneca Rocks is reputed to be the highest peak east of the Black Hills (South Dakota) with a summit reachable only by Class 5 climbing. Humphrey’s Head, although a Class 5 summit as well, does not access the summit of the South Peak, but from the saddle between Humphrey’s Head and the Cockscomb, one can access the second pitch of the 5.2 Old Woman’s Route, arguably the easiest route to the summit of the South Peak.

What Humphrey’s Head offers is a short approach, a short climb, a very small summit with great views, and thrilling exposure. Climbing difficulty ranges from 5.0 to 5.4. It's popular with climbers and is frequently the location of rock climbing classes.

There is a sheathed sling around the summit block, and it seems to be in good shape, but anyone wishing to use it to rappel down or to toprope is strongly advised to use backup.

From the climber’s parking area off Roy Gap Road, hike up Roy Gap Road a short distance (less than half a mile) and approach the southeastern buttress of the South Peak. Before passing it, look across the stream on your left for some stone steps. Cross the stream and ascend the steps. Follow the steep, rocky access trail higher until you are beneath the Face of a Thousand Pitons, the Cockscomb, and Humphrey’s Head. A sign directs you to the right to reach Humphrey’s Head. Scramble up (easy Class 3 to a location known as Luncheon Ledge and then scramble to the Cockscomb-Humphrey's saddle (Class 3+/4-- I have seen people rappel down this pitch, but it is not technical and not that exposed).

•West Face (5.2-5.4)-- About 80’ if done from Luncheon Ledge. Follow some ledges from the saddle to access this option or head up directly from Luncheon Ledge. Pick a line that interests you. I have scrambled about half this face and cannot say anything about protection needed. Any information from people experienced with this route is welcome and will be incorporated here unless the person feels that a separate route page is justified and wants to add one.

•North Ridge (5.0)-- About 30’ from the saddle. Recommended as a descent route or an ascent route for experienced scramblers. As a guy who climbed it with me one day put it, “It’s all there,” meaning you are never lacking for a good hold. However, it is very exposed, and if you fall, you are looking at about 100’ on the west, more on the east. There is one unnerving move that has your back leaning out over several dozen feet of nothing. Even though it’s only 5.0, don’t even think about doing this unroped if you have any issues with exposure.

•Cockscomb Scramble (5.0-5.2)-- This is a suggested difficulty level, not something firmly set, and this is not a route to the summit. From the saddle, one can use a chimney to climb fairly high up the Cockscomb to an exposed point with a great view of the Face of a Thousand Pitons. From there, the climbing is much more difficult and highly exposed to the summit and not recommended for unroped climbers.

Seneca Rocks is known for its ground-up ethics. Although there are still some bolted routes, placing new bolts is a no-no. For trad routes, “natural” gear is the norm.

About a mile away is Seneca Shadows, a USFS campground. Sites can be reserved at recreation.gov. 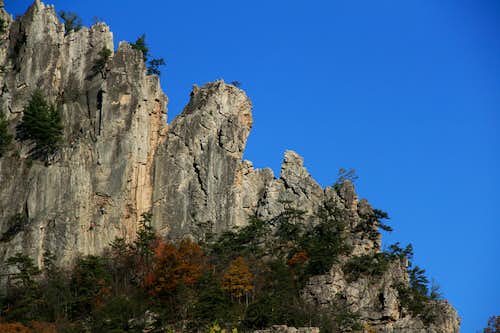