Sister to world-renowned Titcomb Basin, Indian Basin is a spectacular hiking and climbing destination all on its own.  Far from being a secret despite its long distance from trailheads-- Indian basin is, after all, on many a list of Winds destinations to avoid if one is seeking solitude-- the basin nevertheless attracts substantially fewer visitors than Titcomb Basin does.  Although there are not as many peaks ringing this basin as there are in its famous neighbor, there still are six excellent named peaks and several more unnamed ones.  One peak, Fremont Peak, is the second-highest in the Winds and the third-highest in Wyoming (after Gannett Peak, which is also in the Winds, and the Grand Teton).  Another, Ellingwood Peak, is one of the most aesthetically pleasing in the range and also houses one of the finest technical routes-- the North Arete-- in this long range full of challenging peaks.  Hikers will enjoy the basin's scenic lakes (all unnamed and over 11,000') and Indian Pass, the latter of which provides access to the much-diminished Knife Point Glacier and the lovely Alpine Lakes, a remote location not accessed by any maintained trails.


For this page's purposes, the peaks of Indian Basin will be those named ones immediately surrounding it and usually or most logically approached from the basin itself.


Reaching Indian Basin is no light undertaking. Depending on the source you consult, you will find that it is anywhere from 11.5-13 miles to what this page considers to be the beginning of the basin, which is shortly past a junction where one heads left for Titcomb Basin or continues straight for Indian Basin. Most parties seem to take two days to reach the basin, spending the first night somewhere between halfway or 2/3 in at Hobbs Lake or Seneca Lake, but if you're in solid shape, I recommend sucking it up and heading all the way in on Day 1 or at least getting to Island Lake; you will in retrospect be glad for the extra full day of climbing, hiking, and/or exploring.

The peaks here are for mountaineers.  All are at least Class 3 by their easiest routes.

In general, it probably is neither necessary nor useful to make pages for every basin or cirque in a mountain range, but considering this location's next-door proximity to Titcomb Basin and all the excellent climbing objectives clustered around it, it seems to make sense to offer this page to help with planning and logistics. 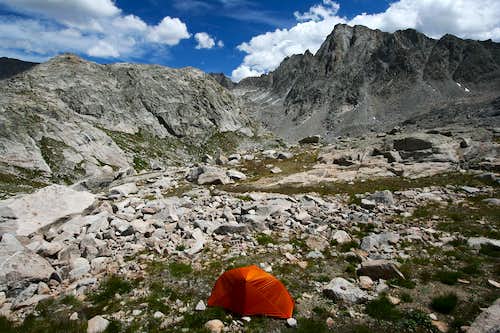 There are all sorts of different approaches one can take, but by far, most people use the one from Elkhart Park.

Start from Elkhart Park, about 9400', and hike 10.5 mi to Island Lake, about 10,400'.  While this sounds like one of the world's easiest backpacking approaches, it is more strenuous than it sounds, for the route does not ascend a drainage or other naturally ascending line but rather has several dips and reclimbs that make the total elevation gain closer to 2000' (still not that bad but frustrating nevertheless).  And the first 5 miles are almost exclusively extremely dull hiking through lodgepole pine forest with no views of anything except more lodgepole pines.
Although there are several trail junctions along the way, with a good map and decent reading comprehension, you will not have trouble following the correct route.
From Island Lake, hike another mile to a signed junction.  In August 2012, the sign indicated Indian Pass was 6 miles along the right fork (seems a bit too long, though).  Actually, it is more like 3-3.5 miles to the pass.  You want to go right here, heading for Indian Pass.  Soon you are in Indian Basin, which is above treeline.

Following is a list of the named peaks of Indian Basin, going clockwise from the northern end to the southern. Included also are elevations and some notes on routes.  There are also several unnamed peaks in the basin.  My source for the named peaks is the Earthwalk Press map; some of these peaks are not named on USGS maps.  The sources for the route information are SP, my own experiences, and the Bonney guide.

Peaks in bold have SP pages and are attached as children to this page.

The following two peaks are not in the basin or walling it in but are close by and can be approached via routes from Indian Basin. 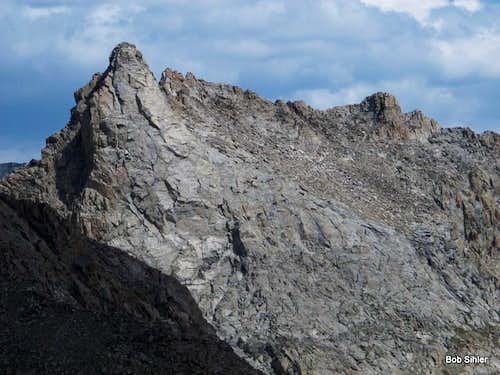 Where you camp is up to you based on your itinerary.  Island Lake makes a good base camp because routes to Titcomb Basin, Indian Basin, and other areas nearby all branch out from it.  If you don't camp at Island Lake and if Indian Basin is your primary destination, then consider the extra hike into the basin to set up camp.  However, be aware that finding good legal campsites can be tricky because you are required to camp at least 200' from lakes.  Also, there is almost no shelter in Indian Basin, and wood fires are not allowed.  Regardless, if you are going to be doing a lot of climbing here as opposed to just one or two peaks, you're going to want to camp in the basin and cut down on the daily back-and-forth hiking.


Note: you might look at a map and think that camping by the junction of the trails into Titcomb and Indian Basins is the way to go, but it isn't.  The ground is rocky and uneven there.

Technically, this part of the Winds is grizzly country again, but I'm not sure if any have been seen in this area.  If any have been, it has been exceedingly rarely.