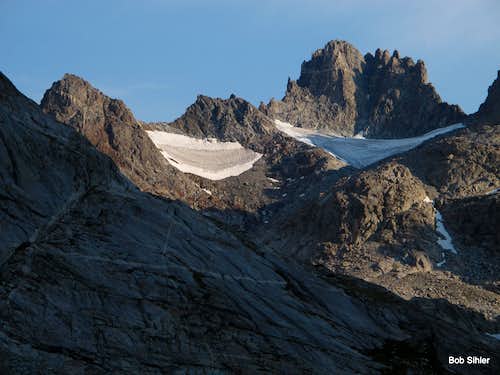 Along with the world-famous Cirque of the Towers, Titcomb Basin is the premier backcountry hiking and climbing destination in the Wind River Range and one of the best in all of North America.  In addition to providing outstanding scenery and mountaineering, it is also one of the two main approaches to Gannett Peak, the Wyoming highpoint and considered to be the fourth-hardest state highpoint after Denali (Alaska), Mt. Rainier (Washington), and Granite Peak (Montana).

Located deep in the range just west of the Continental Divide, Titcomb Basin houses four medium- to large-sized lakes (for alpine lakes) in a boulder-strewn tundra setting, and tall peaks, some rising more than 3000' above the lakes, guard this semi-hidden basin on all sides but its south. Although Titcomb Basin proper is the area between the uppermost lake and the east/west-oriented run of the Continental Divide to its north, most probably consider the "real" Titcomb Basin to begin just south of the lowermost lake, where the valley narrows and the mountains loom more and more with every step forward.

Titcomb Basin, as well as Titcomb Lakes and the Titcomb Needles, in name commemorates Charles and Harold Titcomb, brothers whose many climbing accomplishments in the area included the second ascent of Fremont Peak, Wyoming's third-highest and the highest of the peaks ringing this basin (some sources will lead you to think they made the third ascent, but some reading in Bonney's Guide to the Wyoming Mountains and Wilderness Areas may convince you that the person usually credited with the first ascent did not actually climb that peak but climbed the more challenging Mt. Woodrow Wilson instead).  The Colorado Mountain Club named the Needles so in 1930; I am not sure if they or someone else named the lakes and the basin, and when.

Panoramic view of Bonney Pass and the surrounding peaks

For this page's purposes, the peaks of Titcomb Basin will be those named ones immediately surrounding it and usually or most logically approached from the basin itself. One major exception is Fremont Peak, which climbers can approach from Titcomb Basin but which is easier to approach from Indian Basin.

Reaching Titcomb Basin is no light undertaking. Depending on the source you consult, you will find that it is anywhere from 11.5-13 miles to what this page considers to be the beginning of the basin, which is shortly after a stream crossing and then a narrow trail squeeze through some rocks, following which is a view of the basin and the first of its lakes. Most parties seem to take two days to reach the basin, spending the first night somewhere between halfway or 2/3 in at Hobbs Lake or Seneca Lake, but if you're in solid shape, I recommend sucking it up and heading all the way in on Day 1 or at least getting to Island Lake; you will in retrospect be glad for the extra day of climbing, hiking, and/or exploring.

The peaks here are for mountaineers.  Only one named peak goes at Class 2, and most are Class 4 or 5 by their easiest routes. 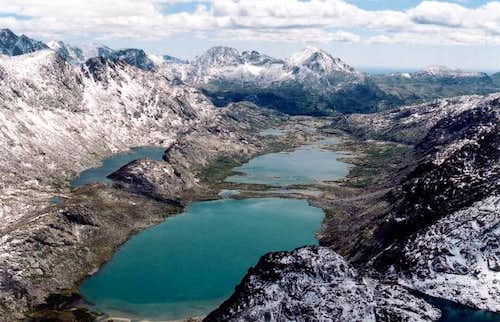 In general, it probably is neither necessary nor useful to make pages for every basin or cirque in a mountain range, but considering Titcomb Basin's significance and all the excellent climbing objectives clustered around it, it seems to make sense to offer this page, just as someone did for the Cirque of the Towers, to help with planning and logistics. (There is also a page for Indian Basin, Titcomb's sister basin and an alpine paradise in its own right and a place many climbers seek.)

Getting There-- Driving and Hiking Information

There are all sorts of different approaches one can take, but by far, most people use the one from Elkhart Park.

Near the south end of Pinedale, turn east onto a signed road for Fremont Lake.  Drive 14-15 miles to reach the Elkhart Park Trailhead.
For specific details, please see Bill Reed's page for Elkhart Park.
Start from Elkhart Park, about 9400', and hike 10.5 mi to Island Lake, about 10,400'.  While this sounds like one of the world's easiest backpacking approaches, it is more strenuous than it sounds, for the route does not ascend a drainage or other naturally ascending line but rather has several dips and reclimbs that make the total elevation gain closer to 2000' (still not that bad but frustrating nevertheless).  And the first 5 miles are almost exclusively extremely dull hiking through lodgepole pine forest with no views of anything except more lodgepole pines.
Although there are several trail junctions along the way, with a good map and decent reading comprehension, you will not have trouble following the correct route. 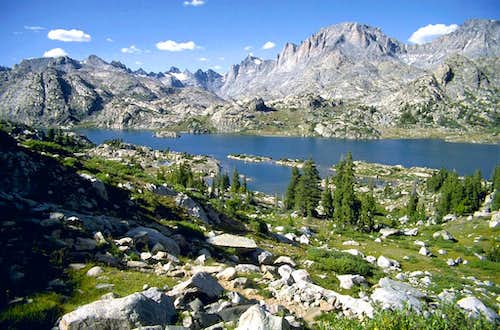 Island Lake
From Island Lake, hike another mile to a signed junction.  In August 2012, the sign indicated Indian Pass was 6 miles along the right fork (seems a bit too long, though).  You want to go left, immediately crossing the stream draining Indian Basin and shortly thereafter entering famous and spectacular Titcomb Basin.
A good trail leads about three miles along the eastern sides of the three main lakes of Titcomb Basin, gaining little elevation as it does so.  Beyond the last lake, the trail starts to fade.  Although it reappears at times and there are sometimes cairns marking the way, neither is really necessary; Bonney Pass, where the "trail" ends, is obvious.  Whenever possible, though, use existing trails or go over bare rock to minimize impact on the fragile tundra ecosystem out here.
It is 3-3.5 mi from the head of the upper lake to Bonney Pass.  Elevation gain is 2200', a moderate grade overall, but be aware that the last mile gains about 1400'.  Even though it is just a hike up talus, it is very steep, and when you consider that climbing Gannett Peak from Titcomb Basin typically means a summit day including this pass and a descent of over 1000' from it and then dealing with it all over again on the return, you understand why many climbers choose to approach via the Glacier Trail even though that way is longer.  Anyway, as you get closer to the pass, a more defined use trail does develop, but I am not so sure it is so worth using; the footing is really loose much of the way, and larger rocks and slabs nearby offer better purchase.  The use trails do speed things up on the way down, though.

Following is a list of the named peaks of Titcomb Basin, going clockwise from the southwestern end to the southeastern.  Included also are elevations and some notes on their easiest routes.  There are also some unnamed peaks.  My source for the named peaks is the Earthwalk Press map; some of these peaks are not named on USGS maps.  The sources for route information are SP and the Bonney guide.

Peaks in bold have SP pages and are attached as children to this page.

Below is a photo collection of the aforementioned peaks.

Mountain climbing is not all there is to do here.  After all, the majority of backpackers who visit Titcomb Basin are not there to climb.

In the basin are four principal lakes: 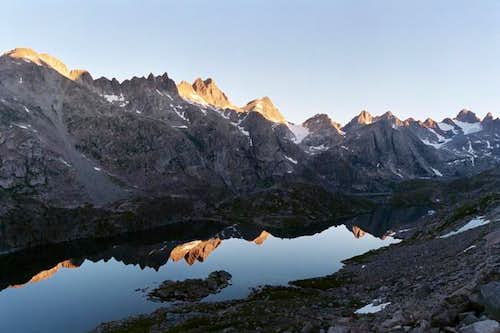 Mistake Lake from Fremont's SW Buttress route
In addition, there is Summer Ice Lake, several hundred feet higher than the Titcomb Lakes and set northwest of them in a lovely cirque). 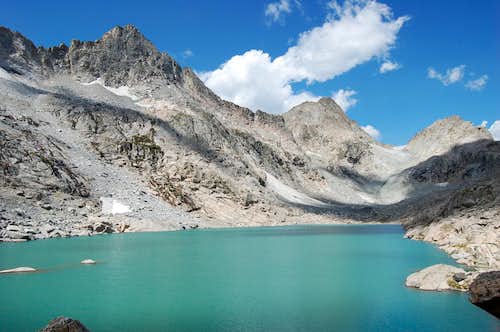 Summer Ice Lake
Cross-country hikers can visit the off-trail lakes and find both solitude and outstanding scenery.
The Twins Glacier is also easy to reach from the upper basin but probably is not visited too often.  Despite being so close to the traffic of the basin, its setting seems a world apart. 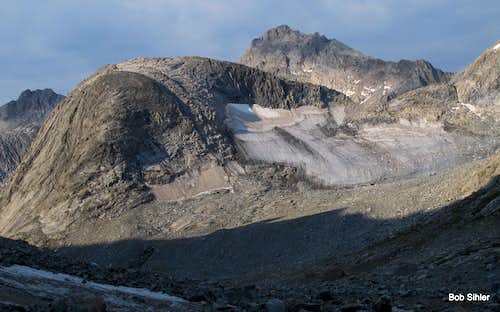 Twins Glacier from near Bonney Pass
Hikers who want sweeping views from high places can also hike to Bonney Pass, previously described.  A more challenging cross-country objective is Knapsack Col; it may be necessary to use an ice axe and crampons to get there safely.  Knapsack Col can be used to connect to Peak Lake as well for those interested in a longer off-trail journey through the Winds. 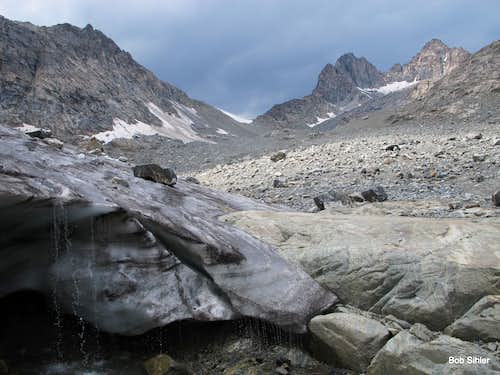 Just read posted wilderness regulations, especially regarding campsites and fires.
Technically, this part of the Winds is grizzly country again, but I'm not sure if any have been seen in this area.  If any have been, it has been exceedingly rarely.

Where you camp is up to you based on your itinerary.  Island Lake makes a good base camp because routes to Titcomb Basin, Indian Basin, and other areas nearby all branch out from it.  If you don't camp at Island Lake and if Titcomb Basin is your primary destination, then consider the extra hike into the basin to set up camp.  However, be aware that finding good legal campsites in lower Titcomb Basin is tricky because you are required to camp at least 200' from lakes.  Also, there is very little shelter in Titcomb Basin, and wood fires are not allowed.  Regardless, if you are going to be doing a lot of climbing here as opposed to just one or two peaks, you're going to want to camp in the basin and cut down on the daily back-and-forth hiking.