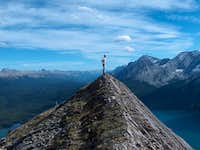 This is a 3300’+/- ascent day. Joy is a straight forward traditional rock climb allowing for great opportunities to build stations along a corner that runs up the south face on slab to the most southern point on Mount Indefatigable’s summit ridge. It is ten pitches long of mostly lower, but sustained 5th class. By Canadian Rocky standards the rock is solid climbing, however, rock fall from above can be perilous. You worst enemy? Wind. This is not a route to climb on a windy day due to wind knocking debris off of the loose ridge and down this large unprotected slab face. It also is not advisable to climb below someone. When you move out onto the slab away from the corner, which you do often on route, there is considerable loose debris in varying cracks. The corner itself has some precarious looking loose blocks that could easily be dislodged. We passed a team who was gracious enough to allow such and I found I could not be careful enough. This is one slick piece of slab. 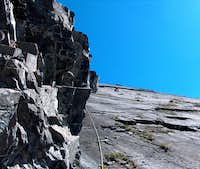 From the North Interlakes Day Use Parking area, cross the dam and head west on the Three Isle Lake Trail for approximately 20-30 minutes until you are below the large slab which is Joy (photo included), on your right, with large talus to ascend to the base of that slab. This intersection with the trail was well marked by a cairn in 2005 and is also the intersection with a trail that heads down to the lake in the opposite direction. Proceed up the talus at a left angle to the base of the slab beneath a bottom to top large corner feature. 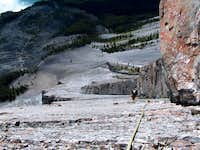 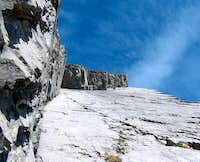 We soloed the first pitch and the remaining pitches did not vary much from one another. There was at least one bolt and two pitons. Otherwise smaller to medium cams, nuts and tri-cams did the trick. We did use larger cams on occasion. The smaller tri-cams worked well in several shallow cracks. At the end of pitch 5, on or about, there was a decent spot in the corner to have lunch that was protected from objectionable hazard above. The station set up at that location consisted of several large blocks and a significant crack into the corner itself at the top part of the indention. On or about pitch 8, as the slope becomes steeper and the slab narrows, you will pass a piton in the corner. I was at 30 meters at this piton and it appeared from below that I could reach another bend in the corner that normally had been serving up decent stations. As I took off another 10 meters, it became apparent the route really did not follow the corner that direction and my placements appeared to be minimal out onto the face. Therefore, I down climbed to that piton and set up anchors there. That allowed a long pitch to a good station opportunity and one final short pitch (our 9th) to the ridge.

The ridge itself was incredibly loose and severe looking when I scrambled up several meters to take a look at whether we should short rope it or not. However, once you ascend the first several meters, you find much easier ground that bypasses the narrow slabby ridge on the right and eventually gain a chimney as the faint path contours around north. You turn a huge amount of the ridge by continuing on the north side until you meet up with a grassy col which serves as a great spot to swap out shoes. You can start your descent here if you are not interested in the south summit. However, there is a cliff band to negotiate below this spot. We continued on to the south summit of Mount Indefatigable which is approximately 1000’ higher. We kept on the north side of the ridge and continued to traverse until the south summit was in clear view. It is best to retake the ridge here with some fun hands on scrambling and then enjoy the view filled hike along the ridge to the south summit.

The views of Mount Joffre, Mount Sir Douglas and their related glaciers and peaks were outstanding. So was the view of the Royal Group in between these two mountains to the west. You will see Mount Indefatigable’s northern summit and connecting ridge to the north and this is part of the scramble traverse in reverse direction.

To descend, hike back down from whence you came for a short distance to gain a ridge on the north side that descends steeply onto a trail that leads down to the Mount Indefatigable Trail. Take a right and travel approximately 3kms back to the Three Isle Lake Trail.